What is your understanding of low-cost or affordable housing?

Of course it’s meant for the low and even middle income group la then? Smurfs ar? Those walking blue things deserve it DA LEAST! Go stay in mushrooms. Not enough? Img from smurfsfanon.wikia.com

But in Johor, somehow, RICH people have been buying these houses, the State Housing and Rural Development Committee Chairman Dzulkefly Ahmad found. He said 16,010 homes under the Johor Affordable Housing Scheme (Rumah Mampu Milik Johor [RMMJ]) were built and distributed over the last three years, but questioned the actual number of deserving people who got them.

“My initial findings show that some of these individuals do not qualify for RMMJ because they are either rich or the RMMJ is not their first house.” he told The Star

But how come these people have been able to get it then? But first, a lil’ bit about RMMJ… Basically, this scheme caters to low to middle income households, to address an urgent need for homes for these families, particularly in big cities. You know how it is… the cost of living against income these days makes it hard for young people to own a house. 😥

Malaysia’s household debt is at 84.6% as of September 2017. Evidently, residential housing loan is the highest, accounting for 50.3% of total household debts. Bank Negara added that the maximum affordable house price in Malaysia should be an estimate RM282,000. However, actual median house price was RM313,000, beyond the means of many households, where national median household income is only RM5,228. People going broke from buying houses. Img from The Star 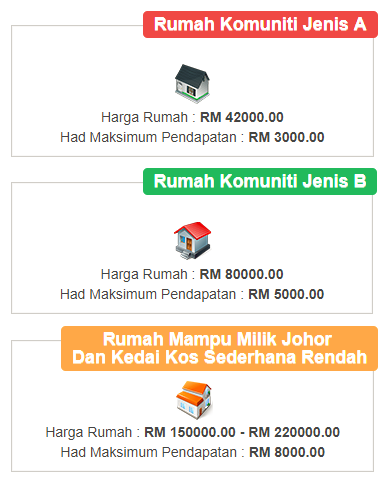 RM42k? For a house? What sorcery is this

Back to the issue of rich people buying RMMJ houses… what has their political affiliation got to do with why they’re allowed to ambik the homes meant for poorer people? Apparently, there was a political party QUOTA!! A 20% quota, to be exact.

Dzulkefly, who is also Jo­­hor Amanah Deputy Chairman, revealed that at least 50% (3,000) of those homes were distributed this way under the previous BN state government. And this quota had been in place for decades, according to Mentri Besar Datuk Osman Sapian. It seems that the units were allocated to BN component party members.

“These homes are meant for a vulnerable group who can’t afford market-priced hou­ses. They should be given purely to applicants who are eligible, and not through any sort of quota system.” – Dzulkefly told The Star

At an exco meeting on 21 May, the Chairman promised to scrap it and come up with a new system that is fair and transparent to reduce the risk of corruption and abuse of power.

Not only that, he requested that the Malaysian Anti-Corruption Commission (MACC) investigate some of the dubious RMMJ recipients for elements of corruption. Dzulkefly added that some of the current recipients may possibly have to return their houses to the state or be forced to pay a much higher amount for the house. Awks magawks.

Gimme back those house keys

NAH, BACA:
How did your mummy and daddy get together? Tell us & win an angpow for them :)

Two other groups also get preference, guess who? Not the Chinese and Indians :p “Through this new method, youths who just got married or are planning to get married are able to buy an affordable home. We hope that there will not be any problems arising after this, where young people or the disabled complain of not being able to enjoy owning an affordable housing unit.” – Khaled Nordin, The Star

For the youth, the first 5 years of employment is the most challenging and toughest period, having barely enough savings to buy any property, The Star reported. At the moment, the withdrawal limit to buy a home is at 30% of total EPF savings, or all savings in Account Two. After the first week of the month

Let’s assume a 25-year old fresh grad aspires to own a home after 5 years of working, with a starting salary of RM2,500-RM3,000. Now let’s take into account Malaysia’s average wage growth of above 5% (for the past few years), to project a yearly salary increase in the next 5 years.

Based on the calculations (table below), the accumulated amount in EPF after 5 years is about RM11,500. This means that the individual can only afford the People’s Housing Project (PPR) unit, priced between RM30,000-RM35,000… cheaper than RMMJ.

Total savings in EPF Account Two after 5 years is RM11,500. Img from The Star

BUUUT, the maximum household monthly income for eligible PPR applicants was raised last year from RM2,500 to RM3,000! How does that make sense?!? Earning a monthly income of RM3,039, the 30-year-old individual is slightly over the limit set by the former Urban Wellbeing, Housing and Local Government Ministry to purchase a PPR home. Woi, no chance la liddat.  😐

Meanwhile, people with disabilities can enjoy a special housing subsidy from the Government, provided they have an OKU card. They get a 20% discount to buy a house. In fact, here’s a host of other benefits PwDs can enjoy, if you wanna read up on it.

Oh, just when you thought we weren’t gonna mention the racial quota… Actually, there is bumiputra quota also. #IHateCilisos Regardless of political affiliation, if a poor household cannot afford a home, the new Johor Government wants to help them own one. At their first Exco meeting on 21 May, Mentri Besar Datuk Osman Sapian said they were gonna get rid of the 20% BN party quota and set up a task force to work out the allocation system without it.

State Housing and Rural Development Committee Chairman Dzulkefly said the new government aims to strictly enforce the state policy that all developers must allocate a minimum of 40% of their homes for affordable housing. Did you know there was one? It’s found in the National Housing Policy, though the allocation percentage differs from state to state. Allocating a certain portion of housing developments for low-cost or affordable units has been made mandatory by the federal government since at least 1982, with the quota then set at 30%. Over time, various states have imposed their own quotas, so, it is not a new thing for private developers to build affordable homes with prices set by the government.

If you’re looking to buy a house for the first time, you can check out these 5 private developers offering affordable housing. Alternatively, click here for government aid, like PR1MA, MyDeposit and more. Or you can do what this guy did and build your own container house. All the best!