On Carsome.my, you could sell your car within HOURS. Srsly.

The minute you buy a brand-new car, its value drops. It’ll continue to drop at a rate of roughly 15% a year, depending on the build, make and overall age. No wonder la, about 40% of Malaysian cars sold (including our Editor’s) are second-hand cars.

But selling cars in Malaysia also not so easy la. So that’s why CILISOS worked with Carsome.my, to take a closer look at this market, and find out what makes it tick. Carsome is Malaysia’s fastest way to sell a car, by inspecting it at their facilities, and then putting it up for auction to local car dealers. Just bring your car to one of their inspection centres, and you could get the payment within just a few HOURS.

Just so happens CARSOME.MY is running a cute little promo this year called CAR-AWWW-SOME, where if you post a cute story about your relationship with your car that you sold thru them, you could win up to RM1000!

So we teamed up with Carsome.my to look at Malaysians and their love of cars

Last month, we ran a survey to Malaysians about their relationship with cars – what colours they like, how they take care of their cars, and of course, how they sell them. 1738 Malaysians took our survey, of which….

With that in mind, let’s get the big shocker out of the way first.

1. 43.48% of Chinese-speaking drivers’ cars are paid for by their parents

One of the questions we asked our respondents was – “Who pays for your car?“. We were first surprised that on average, 34.57% of Malaysians’ cars are paid for by their parents, with most of the rest paying for their cars themselves. However, Chinese-speaking (those who answered CHINESE as their primary language) respondents had a MUCH higher percentage at 43.43% whose parents are the payers, vs only 25.4% of Malays. #SyabasMelayu

So um, yea. We did a trick question where we put “What do you need before you sell your car off?” and asked Malaysians to pick which ones they thought were right. So er.. offficially, ugaiz don’t need to sign names on the car with each ownership transfer, otherwise classic cars will look less like classics and more like a broken arm. So no, even though 65% of Malaysians believe you need to settle all your samans first, you don’t. As our editor can attest, those samans follow your IC, not your car 🙁 You also don’t need a signatory witnesses OR a court order.

So what do you actually need to sell a second-hand car?

“The things you need for a regular car sale are – Ownership Transfer, Puspakom inspection, JPJ documents, Loan settlement form, and your identification documents. That’s it. BUT, if you sell through us, all you need is your IC (or passport) and your car registration card. Everything else we will help you kowtim!” – Janice, Regional Director, Carsome.my

To be honest, only a very small percentage of Malaysians seemed to be familiar with the whole car-selling process, which is probably why…

3. 60.76% of respondents prefer selling their cars via trade-in 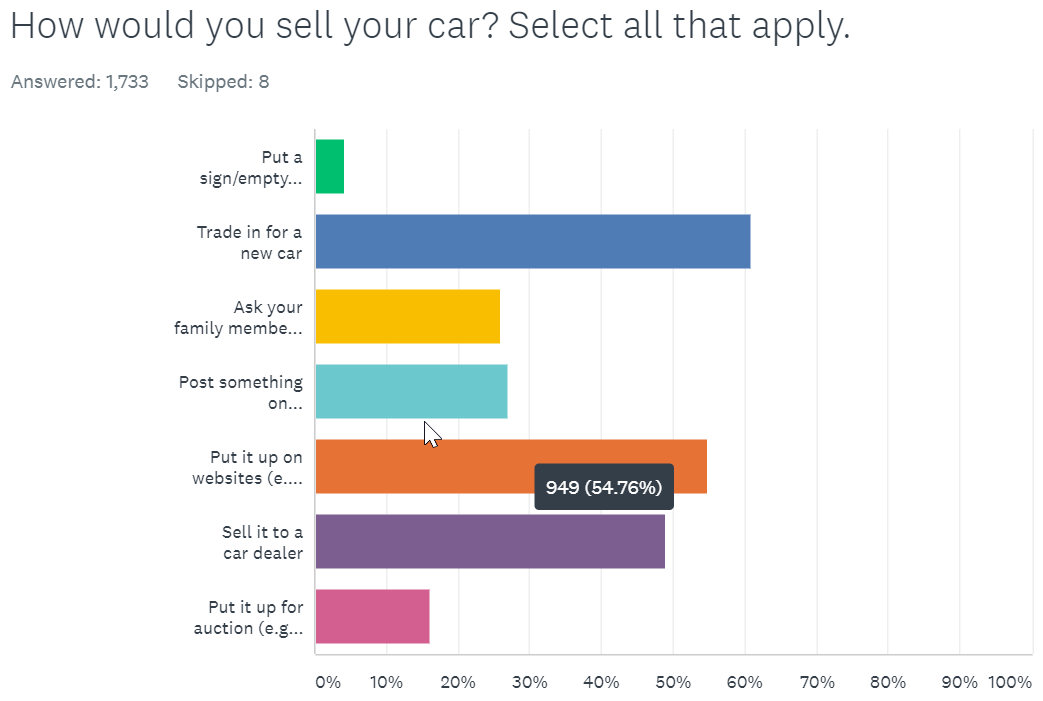 Given the amount of effort required to sell a car, it’s understandable why trading in seems to be the preferred option of selling cars. However, it turns out that might not be the best idea…

“Salesmen earn an average of RM2k from trade-ins, by taking a cut from the price the seller is supposed to get (e.g. if the car is offered at RM20k, they will inform the seller RM18k and they take the RM2k). It can even go up to RM10k or more for certain models” – Janice, Regional Director, Carsome.my

In a close second are websites, which are highly preferred by men (58.38%), and dealers, which are preffered by women (45.49%). From a language standpoint, Chinese-speakers are more likely to go to dealers, since a large proportion of car-dealers are Chinese, while Malay-speakers prefer the internetz. The internet can have its uses though, for instance with Carsome, it opens your car to nationwide bidding, giving you a better chance at a good price 🙂

But there’s one place in Malaysia where things are a little different.

4. Seremban dealers must be quite scary While overall, Malaysians biggest fear when selling a car is getting it undervalued, 26.7% of respondents from Negeri Sembilan are afraid to meet dealers, cos 71% think they will kena scam, and 35.6% think car dealers are very gangster/ahbeng. Assumedly for these reasons, Most respondents from this area don’t wanna give dealers any commission whatsoever. Malaysians in KL don’t need to be afraid though…

“Don’t worry Malaysians. Our inspection staff are screened for gangsterism, and most of them have not seen “The Godfather” or “Young & Dangerous”. They’ll give you a recommended price based on the condition of your car, BUT you are free to set your own price. Don’t set too high la, otherwise no one bids” – Janice, Carsome.my

Carsome is already looking at Seremban as a potential new market 😉

NAH, BACA:
JPJ just got exposed for wide-scale corruption... thanks to a suspect's ex-wife Another question we asked was “What colour of car do you prefer?“, and the results were surprisingly… boring – the most popular colours by far were Black, White and Grey. What was surprising though, were the details. Women were less likely to pick these 3 colours, and more likely to pick other colours including Orange (?!) and Chrome/Gunmetal!

6. People from Melaka REALLY keep their cars for a long time. 64.5% of Malaysians would sell their car before the 10 year mark. But the people of Melaka seem to buck that trend, with almost half of them keeping their cars for more than 10 years. But as we mentioned earlier, in that time, a car could lose around 50% of its original value, although other factors could also come into play.

“Depreciation is very arguable and it depends a lot on car model and car condition. Major accident, flooded car, cut & joint are three main problems that will affect the car price, and a lot of dealers will not take in these cars.” – Mohd Tuah, Head of Inspectors, Carsome.my

As you can see, while age and mileage are the big ones, car modifications are a big nono, as are scratches. But how many Malaysians actually rajin enough to fix these things before selling their cars?

7. Well those kahwin already quite lazy to do anything to their cars So before selling their cars, half of Malaysians would send them for a wash, while 40% would send for a basic tuneup. From these figures, you’re better off buying from single Malaysians, because married couples tend to be a bit lazier, with about 18-21% of them choosing to do nothing before selling, and only 3% opting to reupholster the interior (vs national average of 10%)

8. But in general, most Malaysians seem to love their cars quite a bit When asked whether they feel sentimental to their cars, 52.7% of Malaysians said they “have alot of love for it”, while another 40.4% have some fond memories, that they can easily let go of. That’s probably why 28.28% of them had names for their cars. Names like Thambi Boy stood out (props, macha!), while two married respondents named their cars…. Hyundai Santa Fe and Hyundai Sonata… which, in all fairness would be great names if they were Mercs and BMWs!

Two strange trends we noticed were that more women named their cars than men did, AND that while most Malaysians lean towards feminine names for their cars (like SS Clara Pandy, and Nur Qaisarah Raisya), Sabah cars seem a bit more butch. 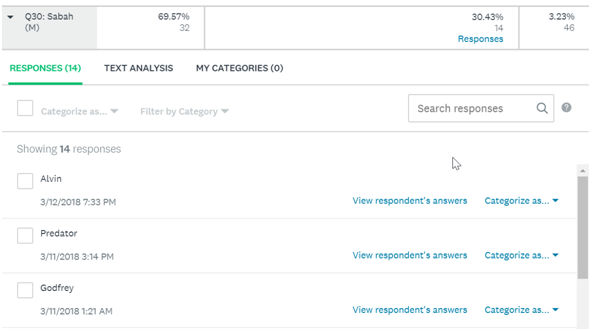 9. And 40% of Malaysians want their future owners to take care of their cars In terms of things to do on their last day of owning their car, 42.7% of Malaysians actually said the words “Goodbye” to their cars before selling them, while 35% took one long last drive before parting ways. Of all the states, Penang people seem to be the most sentimental, 30% taking a selfie, 47.5% taking a long last drive, and 10% draining the petrol tank before selling it #truechinamen.

If you’re thinking of saying goodbye, you might as well earn RM1000 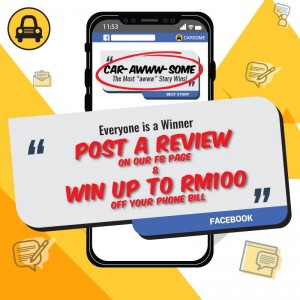 It’s clear from this survey that Malaysians have a strong connection to their cars, and so parting ways can be difficult. So this year, Carsome is gonna make goodbyes a bit sweeter. Aside from the fact that selling your car through Carsome is as easy as just rocking up with your registration and IC (you can even get a free Uber/GRAB back home), this year you can even take advantage of their Car-Awww-Some contest.

Oh, and when you’re thinking of your new spanking ride… don’t la assume mommy and daddy are gonna pay for it k?