And yes, before you start correcting us in the comments, here it is – in 1956, Malaysia still wasn’t a thing. We were instead split into Malaya, Sarawak, and North Borneo. For the 1956 Melbourne Summer Olympics, Malaya sent 52 athletes. However, the focus today is on the two athletes from North Borneo.

Before 16 September 1963, Sabah was known as North Borneo, and it was governed by the British. Because North Borneo had its own Olympic Committee, it could therefore send athletes to compete at the Olympics representing North Borneo. For the sake of simplicity, we will just refer to North Borneo as Sabah in this article.

The 1956 Summer Olympics was special not only because it was the first Olympics with Sabahan representation, but also because…

It was full of controversies.

This Olympics was the first to be held at an Oceanian country, which was Australia. Before this, all the host countries were either in Europe or North America.

Another difficulty with Australia being the host country was that Australia had very strict guidelines with horses that required all animals to be quarantined for 6 months after coming to Australia. Since this was impossible to adhere to, the International Olympics Committee (IOC) was forced to find an alternate location for equestrian – Stockholm, Sweden.

A total of 67 countries participated in the end and one of them was North Borneo!

Datuk Gabuh Piging was born on 11 January 1932 in Tambunan, Sabah. His sports career took off in the early 1950s when he was in his 20’s. He was chosen to represent North Borneo in the triple jump event in the 1956 Melbourne Summer Olympics with a fellow Sabahan, Datuk Sium bin Diau. At that time, Datuk Gabuh was 24 whereas Datuk Sium was 21.

We couldn’t find much information on Datuk Sium bin Diau – the only things we know are that he was born on 13 October 1935 and represented North Borneo at the Olympics. 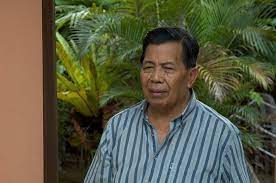 Datuk Gabuh and Datuk Sium were North Borneo’s first Olympians. Out of 28 participants at the Olympics, Datuk Gabuh was ranked 24th after clearing a distance of 14.55m whereas Datuk Sium was ranked 28th with a distance of 14.09m. Although you might feel like this ranking is not super good, getting to compete overseas was already a huge feat, you think becoming an Olympian is easy ah?

Datuk Gabuh went on to become even more successful. Datuk Gabuh holding a photo of himself! Photo taken from Adrian Sprints.

In 1958, he took part in two events, triple jump and long jump, at the Commonwealth Games in Cardiff, Wales. He finished 6th in the triple jump event and 17th in the long jump event.

Datuk Gabuh also set many national records with his impressive leaps. For the triple jump, he leapt a distance of 15.38m at the 1959 Police Championship in Jesselton (now Kota Kinabalu), and he remained the record-holder in the Malaysian national record until 1986 when an athlete named Sidek Sahak broke the record.

In that same Championship, he also broke the previous highest record of 7.06m with a distance of 7.07m. As if this wasn’t already impressive enuf, 2 months after this at the MAAU Championship in Kuala Lumpur, he broke his own long jump record and raised the distance to 7.12m.

Datuk Gabuh was also one of those guys that really saw age as just a number. At the age of 30 (!!) in 1962, he broke his long jump record again at the Asian Games at Jakarta with 7.15m. In 1974, He also won a gold medal in the Police Championship, and he was 42 at that time. He has since been immortalised as Malaysia’s veteran national best performance. His success as an athlete has also earned him the title “The Kangaroo Man” and a Datukship.

It is honestly very impressive to see that whether before or after independence, Sabah still managed to produce high-quality athletes, like Alex Lim. There is absolutely no doubt that Datuk Gabuh and Datuk Sium will forever be remembered as the pride of Sabah.