A family who went on their regular shopping excursion at a mall in Kota Kinabalu brought home more than they bargained for when their teenage daughter gave birth! After complaining of stomach pain, the 15-year-old went to the toilet, but took such a long time coming out that her concerned mother went to check on her. Mom was stunned to find her daughter with a blood-soaked BABY in her arms. It wasn’t the lunch…

Her parents rushed her to the hospital and then reported the 21 Nov incident to the police. Later, all the details were spilled when the teen related that she had had a sexual relationship with a 17-year-old boy, who broke up with her 5 months ago. Both parents had NO IDEA their daughter was pregnant!

Wow… how do you not know your own daughter is pregnant?!? Before you get irked at what seems like bad parenting, know that it’s possible for someone to hide her pregnancy. Not everyone has the same symptoms though

Another 15-year-old girl from Negeri Sembilan gave birth to a baby girl at her school’s surau, but neither her parents, nor teachers, or friends knew she was pregnant. Some of the students were told by teachers not to go into the surau due to a bee sting incident. The Form 3 student went into labour and delivered the baby alone and lost consciousness before the cops were called. When the cops arrived, they found her lying with a baby girl on her chest. A source said nobody was aware of her condition as her pregnancy was not visible.

Eh, really, some people have small pregnant bellies. Also, a woman having her first baby is apparently said to have a more compact bump because the abdominal muscles haven’t been stretched before, which could explain why no one knew these two Malaysian teens didn’t show. This lady took this photo 1 week before her baby was born. Some would consider this small. Image from letthejourneybegin.eu

Still, it beats being ignorant about your OWN pregnancy, like this 19-year-old New Zealander, who didn’t show much weight gain and had irregular period anyway. According to experts, it is 3 times more common for a woman to not know she’s pregnant, than a woman’s chance of having triplets! Perhaps, the woman did not experience the usual symptoms, or they are so mild, she doesn’t notice.

Then there’s something called ‘pregnancy denial’ which is a rare form of denial so extreme that it falls under the category of delusion. For some, the thought of motherhood is so stressful they can go into deep denial, for instance, a teenager may deny or ignore a pregnancy because she doesn’t want her parents to know she’s had sex. Does this perhaps point to a deeper problem among Malaysian youngsters? There is still hope for pregnant teens in this school 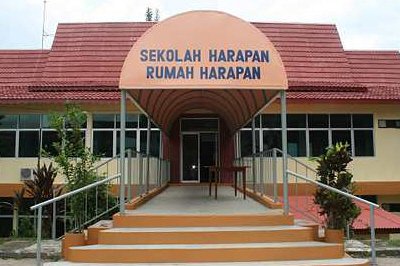 And they can find it here. Image from freemalaysiatoday.com

When young girls find out that they are pregnant, usually it feels like their world is falling apart. They’re so young after all, and they haven’t finished school, besides, there’s the social stigma.

But does that mean their whole future gone case? Well, there is a place now in Malaysia that gives hope to teen mums…literally, it’s called Sekolah Harapan or School of Hope. It is the first school for pregnant teens, opened in Sep 2010 in Jasin, Malacca. Yeah, WHOA, even we were surprised, given our society’s stigma towards pregnant schoolgirls. But this is really good!

Then Chief Minister Ali Rustam launched the school saying it was important that the girls do not fall behind in their studies, or worse, give up academics altogether. Though it’s in Malacca, it’s open to students across the country. Among their first students, were girls from Johor, Pahang, Negeri Sembilan, Kelantan, and so on. After their delivery and confinement period, the girls return to their regular schools. School staff one of the students. Image from Abdul Razak Latif in Utusan

Jabatan Agama Islam Melaka (JAIM) allocated nearly RM500,000 per year to run it, including the teens’ food and staff salaries, although the cost of delivering the babies are borne by their mothers or family members. As of 2015, they have enrolled 275 girls from across the country. The all-female staff teach religious classes in the morning, followed by academic classes in the evening. They also provide counselling and skills training to the girls.

“The school inmates have given birth to 261 babies from 2010 up to this year [2015]. In addition to the care given before and after giving birth, the girls were given religious education and learn a variety of skills such as sewing and cooking during their stay there.” – Datuk Latipah Omar, Chairman of the Malacca Women, Family Development and Welfare Committee, NST

Sekolah Harapan faced some resistance in the beginning by the community, as some believed it would encourage premarital sex. Err, how would a school that counsels young girls against making the same mistake ‘encourage’ sex? Your guess is as good as ours. The school’s Chairman Rahaman Karim defended it, saying it was a practical strategy to combat the rising numbers of baby dumping. Five years on, people have come to accept it, Astro Awani reported. “Until now, we do not have any students coming back to us, pregnant,” JAIM Director Ismail Ahmad said.

There’s a lot to be done to combat teen pregnancy. And we could start with sex ed Studies show that young Malaysians don’t know much about the birds and bees. Durex conducted a global survey in 2012, ‘Face of Global Sex Report‘ involving 37 countries and results revealed that Malaysians are the oldest to lose their virginity at 23 years old, but incredibly, 35% do not believe that a woman can get pregnant the first time she has sex!

However when the Malaysian Health Ministry carried out their own survey that same year (which involved teenagers from the age of 13 to 17), it revealed that 50.4% had sex for the first time before turning 14. The results are so different. Apa ni?

In any case, the fact is that an average of 18,000 teenagers get pregnant each year and seek medical attention at government health clinics. Scared and clueless pregnant girls as young as 13 have turned up at OrphanCARE Foundation‘s baby hatch centres, asking what to do after giving birth. 🙁

So the same problem still remains…*drum roll… youngsters need sex education. EVERYONE has been saying this since the beginning of time (maybe not that far back). You find us an article that doesn’t bring up this solution and we will give you…….10 sen – coz we got no budget. CILISOS wrote an article on WHY there’s need for sex ed before, read here and here. And we’re talking about adequate sex education, not nonsense like:

Had they been equipped with sex ed to begin with, perhaps the cases of teen pregnancies in Malaysia might be lower… but instead of casting them out of society, the best thing would be to help them and their babies have harapan for a future.