When you see a driver whacking an uncle’s car with a steering lock, when there’s a man running in a chicken suit on the Federal Highway, when an MMA fighter throws a kick at a condo security guard… the first thing we do in this 21st century is whip out phones to snap pictures or record it. So that’s exactly what bystanders did when a fire broke out at SMK St Teresa’s hall in Kuching, Sarawak. Photos and videos of it were being shared on social media as a crowd gathered at the scene, however no one thought to call Bomba. The fire had started around 5pm and had been raging for seven minutes before former Kuching Zone fire chief Tiong Ling Hii, who just happened to be driving past, called 999. This happened last October.

Thanks to his sensible actions, the Fire and Rescue Department (Bomba) managed to control the fire within 20 minutes! But because of people’s tendency to post things up on social media first instead of calling emergency departments, the Sarawak Bomba realised they needed to change the way they operated… Two years ago, they decided to start monitoring Facebook and Twitter for emergencies (besides monitoring them for public feedback), making Sarawak Bomba the FIRST in Malaysia to officially do so, according to State Fire and Rescue Director Nor Hisham Mohammad.

“We have tasked the officers in the control room, as well as senior operations officers, including myself, to monitor popular Facebook pages.” – Nor Hisham told The Star

The school fire was one of FOUR incidents which the Sarawak Bomba was alerted to via social media, rather than 999 calls, explained Nor Hisham. The others were a flooded school in Serian in 2015, a ship catching fire in Bintulu last November, and a house on fire in Samariang this year. And true enough, social media is changing emergency response, not just in Malaysia but around the world. People turning on their phone camera first rather than the dial pad is becoming more and more common. According to a US Red Cross survey, more people are using social media to report emergencies or call for help now, and they expect government response agencies to be actively engaged in using social media too.

Is it a good or bad thing? Some people would say it depends on the outcome. An example of a good outcome was when Hurricane Sandy hit. Social media became a key tool in disaster response, where the public looked to Twitter and Facebook to keep informed, locate loved ones and notify authorities, while phone service was down. Meanwhile, those in authority used social media too to organise and direct resources where needed.

But what happens when people die because we chose to use our cameras instead of the emergency hotline? When a man in the US was involved in a hit-and-run, a woman passing by with her daughter quickly called 911, as other bystanders there were filming. Sadly, the man died. We will never know if he could have lived if the bystanders had called 911 before the woman and daughter arrived, but there will always be a ‘what if’… 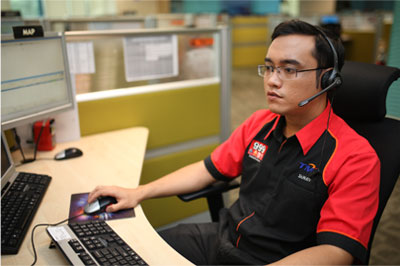 The Malaysian Emergency Response Services 999 (MERS 999) is the Government’s initiative with Telekom to consolidate all emergency numbers into a single number for public convenience.

What happens when you call 999? MERS has 123 professional emergency officers (PEO) who will answer your call within 10 seconds. Before redirecting your call to the relevant agency, Rozinah said the PEO would ask basic questions to verify whether the call is genuine – type of emergency, location, address and contact number.

At one point, Malaysians were sharing over WhatsApp that 112 is another emergency number to call, but let us clear the air that 112 gets redirected to 999 anyway.

If you abuse the line you might kena denda RM50,000 or 1 year jail sentence, or both. 999 is for real emergencies only – badly injured people in accidents, fires, landslide, flood, gas poisoning, epidemic, radiation, explosion, chemical spill, earthquake, tsunami. Under no circumstances should you call 999 if you run out of phone credit, lost your car keys, your kid naughty, or the mamak not yet open…these were examples given by MERS 999 (prolly they got calls like that before 😛 ). For non-emergencies, try these numbers instead.

Types of emergencies you can call 999 for

Facebook may have a location function, but 999’s system has fancier digs… Computer Aided Dispatch (CAD), Geographical Information System (GIS), Computer Telephone Interface (CTI), Voice Recorder and Medical Expert System. It not only identifies the caller’s details, it also allows the police to see where the emergency is happening in real time, with applications showing distance, height, polygons and architectural measurements of the surrounding area.

So, we’re not saying that social media cannot be beneficial in emergency situations, but know that Facebook or Twitter is not the PRIMARY method of trying to reach the cops or Bomba. The absolutest, firstest, most importantest thing to do when we arrive on the scene is call 999.