Have ugaiz seen this funny ad where a kid is kicking and screaming in a supermarket coz dad won’t buy him junk food…then it ends with: So, we read from this interesting article by The Malay Mail Online that women can buy contraceptives at clinics on ONE condition…

“They have to go through counselling to ensure they are using family planning only to avoid unplanned pregnancies and not as an easy excuse to practise random sex.” – Dr. Komathy Thiagarajan, head of the Clinical Unit at the Human Reproduction Division, The Malay Mail Online (TMMO)

So then TMMO journalists did some checking at a Nur Sejahtera clinic [by the National Population and Family Development Board (LPPKN)], the staff insisted they will only serve MARRIED women. Try to get those ‘counselling’ services also unsuccessful!

So TMMO contacted the Health Ministry that said they never set such healthcare policies that discriminated against unmarried women. They claim they even train staff to layan women in a ‘friendly, non-judgmental manner’.

Ehh, you mean men don’t have to face same embarrassment!?? Just buy at a 7-11 store lorr. Image from The Malay Mail Online

Yep, if men wanted to get contraceptives, they can just pop into any pharmacy or 7-11. The worse they come off with is a sideways stare from the cashier maybe…But not a moral lecture like women get at these clinics! In some countries, even better – men can buy them from vending machines. So far we’ve never seen one in Malaysia (correct us if we’re wrong, ugaiz).

To be fair, birth control pills require prescription, so women gotta see a doctor. Such is life la, many female contraceptive methods require doctor supervision. In fact, most contraceptive methods are for women, while for men currently the options are narrower. But here’s a list of the types common in Malaysia and how to get ’em:

1. IUD (Intrauterine Device) – For women. A 1.26 inch T-shaped device that goes in the uterus. Obviously it will require the doc’s help to insert. It lasts 5-10 years, but can be removed earlier. More than 99% effective.

2. Injection – For women. The jabs (administered by doctors) contains progestogen that thickens the mucus in the cervix, stopping sperm reaching an egg. Lasts 8-12 weeks. More than 99% effective.

3. Implant – For women. A 40mm long tube inserted under the skin of the upper arm by a doctor. Lasts for 3 years but can be removed earlier. More than 99% effective.

4. Sterilization – For women. A surgery carried out by a doctor, where a woman’s fallopian tubes are sealed. Lasts permanently but is reversible. More than 99% effective.

5. Rhythm – For women. This is a natural method, where the woman just keeps track of her menstrual cycle. It requires very careful record keeping and diligence. More than 99% effective IF followed carefully.

There are plenty of other options like diaphragms, spermicide, and so on. Click for more. There’s vasectomy too for men, although they’re not so common in Malaysia. By rank of popularity, pills are no. 1, followed by rhythm, and then condoms. The point is, WOMEN, not men, are put on the spot when they need to get contraception.

“Continuous training is a strategy to sensitise healthcare personnel with regards to the stigma. However it may still be difficult for unmarried women to get this service due to our social, cultural and religious belief.” – Datuk Dr. Noor Hisham Abdullah, Health Director-General, The Malay Mail Online Aiyo, the poor patients prolly feel so awkward whenever they step foot into those clinics. 😯  There are no stats to confirm that malu-ness is the reason for low contraceptive usage among Malaysians, however this issue does exist. The actual reasons stated by the Malaysian Journal of Public Health Medicine are because women either do plan to have kids, are worried about side effects, or not permitted by husbands.

Only 48% of Malaysian women within the fertile age group (15-49 years old) use contraception. It’s one of the LOWEST rates compared to our neighbours like Singapore (71%), Thailand (73%), Indonesia (62%). More data here for other countries. But notice that there are no stats for men. Then again, how to keep track if men can just buy from a convenience store right?

So how can men get involved too? It doesn’t make you less macho! Image from resources2.news.com.au

History has shown that ever since contraceptives were introduced in Malaysia in the 1930s, there’s been a lack of men’s involvement. As in when they engaged the public, they’ve only managed to engage women and not so much men. Not to mention, the blame often (if not always) falls to the woman when unwanted pregnancies occur. Sadly, gender bias isn’t just a Malaysian problem…it’s a global problem.

BUTTT what if men WANT to get involved? What if they wanted to be helpful, supportive partners?

Well, clinics could offer is couple counselling. Studies have shown that involving men in counselling can increase contraceptive usage and effectiveness. They need information and the opportunity to form positive attitudes and communication on the matter.

Both men and women need to know the importance of contraception because:

You can save your wife by helping her space out childbirth, so that mom and baby can gain maximum quality if life and let her recuperate from pregnancy. It makes a big difference based on Report on the Confidential Enquiries into Maternal Death (CEMD) Malaysia 2001-2005 results – up to 70% maternal deaths never practised family planning.

2. It increases effectiveness if BOTH use contraception

Don’t just leave it to the woman lah. If both partners used them, it will increase the effectiveness of preventing unwanted pregnancies. End of the day, this is the major problem we need to address.

Coz unwanted pregnancies are increasing quite banyak wei According to police records, 517 baby dumping cases were reported from 2005 to 2011. Of the total, 230 were found alive, while 287 were dead. Latest figures we could find were 88 babies in 2012, 19 babies in 2013, and 26 babies in the first quarter of 2014. Some of the finds were pretty gruesome. Federal CID Director Datuk Seri Mohd Bakri Zinin revealed common locations for dumping were housing areas, by the roadside near mosques, rivers, bushes and public toilets. 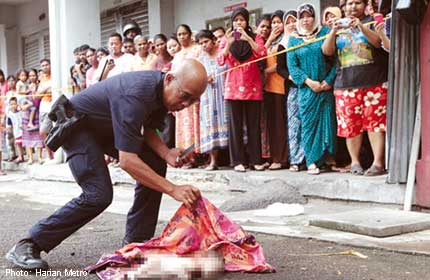 There have been 2 cases of babies being thrown from buildings. Image from Asia One

Has anyone been convicted for these crimes? Well, the law is a bit more complex than that – the punishment for infanticide in Malaysia is jail for maximum 20 years. But infanticide means the mom purposely killed the baby before hiding the body, or left it in a place where the baby would most definitely die before being found. Such as flushing it down the toilet bowl, where obviously it’s gonna die.

Then there’s hiding the birth by secretly disposing the dead body, which means the baby died before, during or after delivery, and the mom tries to get rid of him/her. So she didn’t INTEND to kill the baby. This one carries a punishment of 2 years jail. Plus, there’s also exposure and abandonment of a child below 12 years old, which means the mom intended to abandon, but not kill the baby. Punishment is 7 years jail.

But as for how many people the police have caught for these acts, here’s what we found from a journal:

So what can be done about this?

How to stop Malaysians from dumping their innocent babies? 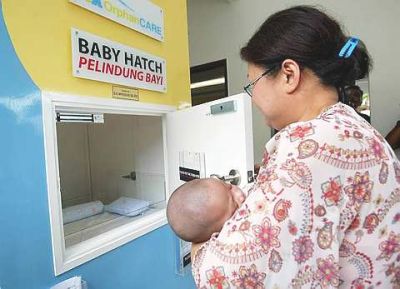 Baby hatch demo at OrphanCARE. Image from The Star

Baby hatches… well, actually not really… some Malaysians argue that this will ENCOURAGE people to dump their babies and have premarital sex. We’re left to deal with the problem AFTER it happens rather than preventing it in the first place. But it sure beats finding dead babies in septic tanks, drains or toilet bowls! It was surely a touching effort on OrphanCARE’s part when they set up Malaysia’s first baby hatch in PJ. It saved 82 babies lives 3 years after it’s commission in 2010.

So how do we get to the ROOT of the problem without sidelining the men? (And without talking about contraception again).

1. Charge biological dads in baby dumping cases too. Penang Exco Chong Eng said punishing women alone will not serve any justice to the abandoned babies since, hellooo, men contribute to the pregnancies too. If fathers could be held equally responsible, both parties will be more careful before engaging in sex.

2. Teach them larr, both guys and girls. As you know, Malaysia has consistently rejected teaching sex education in schools. What they’ve always been teaching is only on abstinence, though this led our youth right to MORE teen pregnancies and child marriages.

Truth is, teaching only abstinence ain’t gonna work, coz obviously humans are curious and they’re gonna try it anyway. So why not teach them to be careful to avoid unwanted pregnancies. And if there are no mainstream sources to teach ’em, our youth can turn to sex educators in Malaysia, including June Low on her show Popek Popek.

In the end, we have to address the issue of social stigma. Sisters in Islam spokeswoman Yasmin Masidi said people fear being ostracised by society and punishment by the religious authorities. So James Nayagam, Shelter Home Executive Director said it was more important for society and families to be supportive to single mothers or many might dump their babies in fear of getting shamed. Or even if they don’t dump their babies, the stigma doesn’t end…

“When your daughter is at primary school, her friends and even teachers will wonder why her name is binti Abdullah when the father’s name is Zulkifli. As it is common knowledge that children born out of wedlock are binti Abdullah, your daughter will experience the name calling and jeering.” – Azrul Mohd Khalib, social activist on HIV/AIDS and human rights issues, The Malaysian Insider

At the end of the day, everyone has their way of living life and the authorities can’t be there to police them all. Maybe it’s time to stop judging people and start helping them.