House hunting? Urgghhh! House hunting may not be a fun task for everyone. After going through listings upon listings, your eyes also wanna roll like a slot machine. If ugaiz are going through that torture right now, don’t forget to check out what makes property prices go up.

Otherwise, give your eyes a break from all those listings and gawk at these nice pictures of unique and bizarre houses. You might think all these weirdmazing houses are only found in other countries. But we found a bunch here in Malaysia that are Pinterest-worthy! Welcome to the Shire. Image from Siakap Keli

Isn’t it cute? Recently making waves on Facebook, this 70-year-old house belonging to Amizar Adnan’s family is almost entirely covered with creepers. Siakap Keli, reportedly the first to mass share it on Facebook, got almost 60,000 Likes on the post! The comments however could have been more positive. A few people called the owners lazy and others said it might invite poisonous creatures.

But their reason for letting the creepers grow is really simple – the really old house’s walls had started to rot and come apart. “My husband has repaired our home many times but the repairs never lasted long. Then, he came up with the idea of preventing the walls from falling apart by using plants to hold the wood together,” said Amizar in The Star. Not only have the creepers held their home together, it has also kept their house cool as if got air-cond. Now, that’s eco-friendly!

And for those of you who are ‘concerned’ about the family’s safety, they’ve yet to find any dangerous insects or snakes inside. Everything is topsy turvy. Image from Virtual Malaysia

Ok, no one actually lives here, but it’s still a house…and it’s upside down. Everything in the house, the sofas, TVs, books, beds, kitchen appliances, are all stuck to the ceiling – which is actually the ‘floor’. Even the Kancil parked in a garage outside is terbalik. HUHH? Dizzy kan? 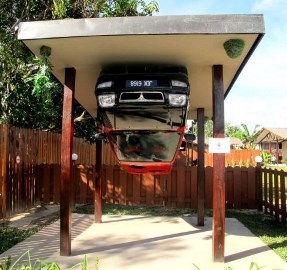 How? Just how? Image from Sabah Booking

This tourist attraction is not only Malaysia first and only upside down house, but Southeast Asia’s as well. There are other upside down buildings around the world you can check out here. The house was built for RM500,000 by Alexander Yee, who operates a tourist lodge in Sukau, Sabah. He described the 140sqm house as a mix of ethnic Sino-dusun and Dusun style in The Star. A watermelon bus stop! Image from I Love Sabah

Next time you’re in town, check it out. It’s open daily from 7am to 7pm. Adults pay an entry fee of RM10, while for kids it’s RM5. Using every random thing under the sun, like drift wood, tree roots, ship rope, and used carpets, homeowner Abang Zul whipped up this strange looking house. It’s also attracted tourists to stay over and take pictures of the house for their Langkawi memories, including someone from Canada, who then painted the likeness of the house as a gift for Abang Zul. How sweet! Teratak Akar (name of the house) has even received backing from Kedah Tourism’s EXCO Dato Haji Rawi, who promised Abang Zul to get him more materials to keep quirkifying his house. Here’s a video the tourism board uploaded on YouTube.

So how did Zul get the idea to design his house like a giant ginseng? Every time he saw people doing renovations, they threw away or burned bits and pieces of wood:

At least we got the gist of it. It’s a bit hard to hear what they’re saying above the Bob Marley soundtrack and traffic noises in the video, hurhur. Who wouldn’t want to wake up to this view every morning? Image from Facebook The Malaysian architect, who is the owner of his own firm, built it for a family of seven on a slope overlooking a forest. The owner (who is anonymous) told Creative Home X that he was referred to Gim Wah by other homeowners in Janda Baik. “I bought this plot of land eight years ago (the interview was in 2013). This location is ideal for a family retreat or a short getaway from the hustle and bustle of city living,” he said.

He gave Gim Wah the licence to go crazy because he didn’t have any concept in mind. So, Gim Wah let the surroundings and natural curving slope inspire him. But it wasn’t easy building on steep terrain like that. Many times, he and the contractors had to get creative when devising ways to transport the materials down.

Finally after 15 months, they completed the 6,800 sqft, three-storey bungalow, with a very modern interior. For more pictures inside and outside, click here. You may have heard of the Tanka people from China, who lived on boats their whole lives. But in Malaysia, there is such a thing as boat houses too. We’re not talking about kelongs or other houses on stilts over water. We mean FLOATING boat houses. They’re pretty common on lakes, such as Tasik Kenyir or Tasik Belum Temengor, except they’re not permanent residences or anything like that.

NAH, BACA:
Being gay: 8 things I learnt after leaving Malaysia for New York

These boat houses are up for rent for tourists who wanna try living a few days on a floating house in the middle of a lake. So zen! They look like any ordinary house with TVs, sofas, beds, kitchen stove, etc., except instead of having a garden, you open the door and it’s a lake. Cantik leh? So for your next holiday if you’re interested, you can rent one of these boat houses here, here and here.

Malaysians seem to love the castle concept. Images from The Star

No, we didn’t steal these pictures from someone’s Pinterest. These castles really exist in Malaysia. Here’s another one we found on Google street view: Notice the one common feature among these houses are the turrets? Where else are they gonna shoot arrows and pour boiling oil out of, right?  😛

According to The Star, that one with the conical blue roofs is called Sophia’s Place. Located in Ampang Hilir, it supposedly looks very dreamy at night when lit up. It even faces a lake – like a moat! Bro, authenticity points = 10/10!

Some of you might recognise the castle house on the right if you have driven by the Damansara Heights neighbourhood.

The white one in the middle is 6-storeys high, has 14 bedrooms, 15 baths and 4 separate kitchens. Fuyoh! And you know what it’s called? Camelot…as in King Arthur’s Camelot. For more info on its drool-worthy features, click here.

Where: Used to be in Bangsar, KL OMG the aliens have landed! Just kidding. This UFO looking house is called Futuro House and has a very interesting story behind it. In 1968, a Finnish guy, Matti Suuronen, created the first Futuro House in Finland as a portable ski chalet. It went global with fewer than 100 being built. But wherever they were built, they often met with public hostility. Yet, they did appeal to some people who became collectors of the fiberglass-reinforced polyester plastic structures.

So how did this UFO land in Malaysia? There’s very little information but we found this website. There was a Futuro on Jalan Bukit Pantai, Bangsar, belonging a C.T. Doshi (who died in 1996). It’s said the house was imported from Australia and installed in 1973, then very sadly it was demolished in 2003. 😥 The website writer was so gung-ho, he even tried Google Earth to look for it, but by then it’s already gone. He also found a 2003 article by Dennis Chua, which ends with these words:

“Monuments exist to remind us of our history, and their preservation cannot necessarily stand in the way of development.” – thefuturohouse.com Or toadstool… Image from The Star

C’mon, does this house not look like a cluster of mushrooms? We half expect gnomes or the Smurfs to wave from the windows. It’s real name however, is Lee Residence. Designed by Wooi Lok Kuang for his client, Francis Lee, it won the Pertubuhan Akitek Malaysia (PAM) Architectural Awards 2010. The jury called it:

“A bold statement of free-flowing forms and spaces around nature; a piece of art expertly executed.” – jury people, The Star

The whole idea was to have a 3-in-1 residence, so that when the family expands, they’d all get to stay close together. Really, really like the Smurfs! Each bedroom suite is private and has its own independent area, but the loft has a 360° view where the family and their friends do line dancing.

Literally a house made from earthbags. Image from naturalbuildingblogcom

A cheap and natural way to build a home if you’re on a tight budget or live in a natural disaster prone area. Earthbag construction can be done very quickly, but despite that, it’s sturdier than you think and no big bad wolf is gonna be able huff and puff and blow it down. They’re flood resistant, earthquake resistant (passed an ICBO shake table test), bullet and blast-proof. In fact, this technique was used during the war to build military bunkers.

All it requires are sacks filled with inorganic material (like earth), then you just pile them up like the standard bricklaying pattern. The house in Kampung Buayan was the product of a masterclass organised by Arkitrek. It was a programme to help the people at Ulu Papar because of a restriction on the traditional use of forest and a dam being built there which would flood the homes of everyone in the valley.

Will this type of house become a trend outside of Kampung Buayan? We dunno, but a couple in KL seemed interested in the idea. And if it’s good for floods, maybe they can build them along the East Coast where it always banjirs. DIY your own earthbag house with these steps. This house is so big, it overshadows all the others around it. Image from vincentloy.wordpress.com

You know who this house belongs to? YTL… in other words Yeoh Tiong Lay, yep, the land and hotel mogul. Designed by Paris based Jouin Manku and completed in 2008, the house is called YTL Residence – although we would’ve called it the Tony Stark House. You are what you live in The line, “you are what you eat” is so true for houses as well, yep, a house can describe its owner’s personality. Subconsciously, we shape our life around it – patterns, colours, textures, arrangement, etc.

For example, a person who goes for minimalist design is probably a perfectionist, determined and introverted, according to Freshome design and architecture magazine. On the other hand, someone who decorates in pop art style with lotsa bold colours and unconventional pieces, is probably complex, mysterious and fresh. So, for someone who’s creative and 25 and a freelance web designer, he’d probably go for a container home. That’s Azree, whom we interviewed for our rumah kontena story.

It’s nice to see you’ve got some creative, unconventional homeowners in Malaysia. Hopefully, this list eased your pain a bit on the house hunting. If none of them are to your liking, then hey, maybe you could start something unique?