It feels like everyone’s a Datuk nowadays. So much so that there’s even this famous saying by the Sultan of Johor that sounded like this…

“If you were to randomly throw a stone, it will hit a Datuk’s head, bounce off, and hit another Datuk’s head.” – translated from Berita Harian.

This has been an issue for the longest time and it seems like someone – or rather an organisation is finally doing something about it. The Council of Federal Datuks of Malaysia (MDPM) has recently suggested that a new Datuk registry be formed. 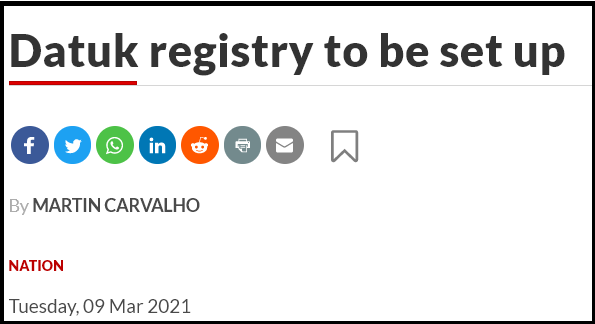 Don’t we already have a proper registry for that??

We got in touch with Datuk Samson Maman, exco member of MDPM to find out more about this. And, according to him, yes, the govt has its own national registry that you can visit to verify whether a person is a legitimate, and recognised Datuk or not.

In fact, he advises everyone to go on the govt’s Ceremonial & International Conference Secretariat Division website if they wanna verify someone’s Datuk title. However, we discovered that using the website can be a bit tricky.

Here’s a tip: ensure the website is set to the Malay language first before you scroll down and click on ‘Semakan Penerima Darjah Kebesaran Bintang dan Pingat’, where you can check a person’s Datuk title and ALL awards conferred to him or her.

Fret not if the website takes some time to load (well… it’s the govt website anyways…) because, according to Datuk Samson, it has just been upgraded sometime in December 2020. As it turns out, the older version of this website won’t show you all these deets.

“Last time, when you key in a person’s name, you’ll also have to state if he or she is a federal or state datuk, specifically the state where he or she was awarded the title itself.” – Datuk Samson to CILISOS.

Datuk Samson added that the govt has worked really hard to obtain this information cos… y’know… these are really private information. And it can be tough for the people in the division to get their hands on this info, especially if the titles and awards were conferred in the past.

So, if Datuk Samson is telling Malaysians to go to the existing national registry to verify people’s Datuk titles, then what’s the need for a new registry or body?

This new body is for legitimate Datuks from all around Malaysia

Reading from the headline we featured in the intro (cos who has the time to read the full article, right?), you’d think that MDPM wants to form a new registry in addition to the existing one. But, no, ladies and gents. MDPM is NOT forming a new registry. In fact, MDPM’s main goal to form this body was entirely different. So, we’re gonna refer to their proposed body as bodies or associations to avoid further confusion.

“Majority of the Datuks who received their titles and awards from other states reside in Kuala Lumpur and Selangor. They want to have a national presence and be active at this level but there isn’t any association representing them at the moment.” – Datuk Samson.

Now, you’d ask – why don’t they just join MDPM? For one, Datuk Samson clarified that MDPM is an association for Datuks who receive federal awards and are residing in KL and Selangor.

Just to quickly refresh your minds, a Datukship can be conferred at two levels:

He also added that there are existing state associations that are representing the state Datuks who reside in their respective states. There, these associations conduct various activities including this… No, we’re not kidding. Img from Twitter #resettourism for illustration purposes only.

So, all that’s left are the state Datuks who reside in KL and Selangor, who can’t join any of these associations. Datuk Samson mentioned that this new body proposed by MDPM will cater to them and also other federal or state Datuks who wish to join this body.

But why is MDPM taking the responsibility to form this body? Can’t these Datuks just form one association by themselves?? For one, it seems like there is a demand from the state Datuks in KL and Selangor to join MDPM’s proposed body because MDPM is known for being a credible body.

“The MDPM Datuks will carry the MDPM card and everyone knows their titles are legit.” – Datuk Samson.

And that’s because, aside from it being a registered association under the Registry of Societies (RoS), it follows a really stringent membership process. Datuks who want to be MDPM members would have to submit a copy of their watikah (instrument where the YDPA signs to grant them their Datukship) to verify their legitimacy of their Datukship.

Once they pass this process, they would be given a membership card and would be able to participate in activities the association organises. Perks of being an MDPM member: membership card (left) and car emblems. Images from The Star and MDPM

Datuk Samson mentioned that using the same stringent process, the new body will be able to verify the validity of its members’ Datuk titles. But there will be an additional requirement to be this new body’s member.

“We will again ask for a copy of their watikah and inauguration photograph (the photo with Sultan) as proof. The reason being is some of them are just getting their Datukship online or are manufacturing the watikah by printing it themselves.” – Datuk Samson.

So, it seems like anyone with a printer can be a Datuk these days because…

Some associations in Malaysia are selling fake Datukships!

But with all the associations claiming that they serve to filter out these bogus Datuks, how can you even tell which association is legit? Datuk Samson said that if an association is unregistered under the RoS and offers you any kind of Datuk title with or without a fee (no, not membership fee), then it is likely a bogus association. Yes, even if they say they can offer you an Honorary Datuk title. This guy even got an offer letter to get a Datuk title in Melaka in 2013. Img by Faihan Ghani from The Star.

“The word honorary itself is dubious – it’s either you’re a Datuk or not. There’s no such thing as an Honorary Datuk.” – Datuk Samson giving an example.

He told us that oftentimes, these unrecognised Datuks are the ones tainting the Malaysian honorifics as many people have been reportedly duped by them. This may be why you’ll see recent news on individuals like MCA’s Datuk Seri Michael Chong and associations like MDPM aiming to catch these bad guys.

At the time of writing, MDPM has recognised and is gathering some info on bogus associations in Malaysia. It will soon lodge a police report under the Offences Relating to Awards Act and Emblems and Names (Prevention of Improper Use) Act 1963. Datuk Samson also encourages Malaysians to do the same if they suspect anyone or any associations to sell or use fake Datuk titles.

But with all these efforts, we could only wonder if we would finally see an end to an issue that has been around for some 22 years.

Share this article:
NAH, BACA:
How MCA ended up with a Malay president in the 1980s