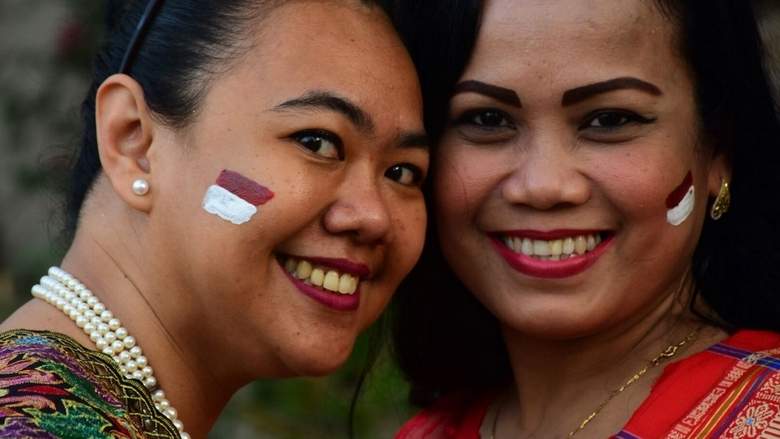 However, despite that, we haven’t always been on good terms. Like, even at the recent 2017 Southeast Asian Games that was held in Kuala Lumpur, we somehow managed to mess up at the opening ceremony itself. As it turned out, in the guidebook for the SEA Games, Indonesia’s flag was depicted upside down, as tho it was Poland’s flag. Suffice to say, it wasn’t taken lightly by our Indonesian counterparts, with Indonesia’s sports minister Imam Nahrawi tweeting:

Thankfully, Indonesian President Joko Widodo wasn’t too offended, only that he wanted a formal apology. Khairy Jamaluddin, Minister of Youth and Sports apologised, along with our Foreign Minsiter, Datuk Seri Anifah Aman. The people of Indonesia however were a little bit more peeved and got the hashtag #ShameonyouMalaysia to trend on Twitter.

This may seem like an embarrassing mistake by us, but with relations between Malaysia and Indonesia more on-again-off-again than Ross and Rachel in Friends, you’d be worried too. In fact, here are four times we pissed them off so bad we almost got into real conflict, starting off with the time when…

Yeah so uh, probably the biggest breakdown between Malaysia and Indonesia happened when Malaya decided to become Malaysia. “How dare you Tunku, how dare you?” Image from Merdeka

This marked the start of the Konfrontasi period of conflict between Malaysia and Indonesia, with Soekarno’s infamous speech:

“If we’re hungry, that’s fine. If we’re embarrassed, that’s also fine. But if we’re hungry and embarrassed because of Malaysia, that’s not fine!” – Soekarno, translated from quote in Paijo & Paijah

It was at that very speech where Soekarno first called for Indonesians to ‘ganyang Malaysia‘, which means to crush/defeat Malaysia. With the Konfrontasi period in full swing, Indonesians began launching attacks towards Malaysia. It isn’t technically war because there was never a formal declaration of war. Despite that, the list below is sadly only a fragment of the attacks on Malaysian soil by Indonesia: Despite the relentless attempts to ‘ganyang Malaysia’, we managed to repel most of the attacks thanks to Commonwealth countries such as Britain, Australia and New Zealand helping us out. Eventually, by 1965, the attacks became less frequent, with Indonesia struggling due to internal issues. Infighting among several government factions meant Soekarno slowly lost control of the government.

He would eventually be ousted by General Suharto in 1967. Suharto had just come to power after years of domestic fighting and the last thing he wanted was more fighting outside their borders. It was this change of power that thankfully, restored diplomatic relations between Malaysia and Indonesia.

2. Both wanted Sipadan in their sempadan

You would think that after coming really close towards actual war that Malaysia and Indonesia would stop bickering over territory but nah. Land (and ocean) issues remain a common area of disagreement between us two neighbours. One of the more well known incidents of this is the argument over Pulau Sipadan and Pulau Ligitan. It’s quite important, as it’s the first Southeast Asian territorial dispute to be settled at the International Court of Justice. A map of the disputed islands in the region. Image from Durham University

Pulau Sipadan and Pulau Ligitan are two small islands near Sabah. Indonesia and Malaysia have been arguing over these two islands for awhile now, since the tail end of the Konfrontasi period in fact. Indonesia claims that in 1969, they had a verbal agreement to discuss who owns the islands, but Malaysia denies they ever had this agreement. The argument really heated up in 1991 cos Indonesia found that Malaysia had been developing Sipadan to make it a tourist destination.

You gotta admit, the International Court of Justice has one cool lookin’ logo. Image from Wikipedia

Eventually, the issue got way out of hand to the point where in 2002, the International Court of Justice had to intervene. The mat sallehs decided that the islands were indeed Malaysia’s. The main reason why was that the British had already been developing these two islands back when everyone in Southeast Asia were colonised. Besides, Indonesia’s colonist, the Dutch, didn’t bother with Sipadan and Ligitan. As such, the ICoJ said that these two islands belong to Malaysia. In any case, they’re much closer to Malaysia than Indonesia anyway.

NAH, BACA:
Nazri's MP seat is in danger for GE14, and his counter plan is... Chinese Aunties! (Seriously)

That doesn’t mean we’re done arguing with Indonesia over our borders tho. In fact, we’re still arguing today! The Ambalat sea block off the coast of Sabah is rich in oil and natural gas, and both countries want it. We’ve been arguing over Ambalat since 2001, and there hasn’t been a significant verdict about it just yet. The closest that Malaysia and Indonesia have gotten towards a peaceful verdict regarding Ambalat was in August last year, where both nations signed an MoU to “explore possible solutions”.

3. They threw poopoo at the Malaysian Embassy

Speaking of territorial disputes about the sea, back in 2010, our embassy in Jakarta once had human poopoo thrown at it during a protest. The protest happened because of the arrest of Indonesian maritime officers that were reportedly in Malaysian waters. Incredibly, the reason the Indonesian officers were in our waters was because they were arresting Malaysian fishermen who had entered Indonesian waters. This stems from the fact that we both have different opinions on the actual border in the sea, resulting in overlapping areas. An officer tries to manure-ver himself over a protester before they throw the feces. Image from Citra Ceria Berita

In the week that followed the arrests, Indonesians began protesting heavily. The Jalur Gemilang was burned throughout various Indonesian cities, and it peaked with a demonstration in front of the Malaysian embassy in Jakarta. It was at this protest that the infamous ‘poo’ incident happened. Indonesian NGO Benteng Demokrasi Rakyat (BENDERA) led the charge during these protests, as they threatened to shave the heads of Malaysians in Indonesia and deport them home. They also called for Indonesians in Malaysia to return home, and an end to diplomatic relations between the countries. The Jalur Gemilang being trampled on during the 2010 protests at the Malaysian Embassy in Jakarta. Image from Citra Ceria Berita

Thankfully, the leaders of both nations were quick to condemn the protests to prevent any further altercation. The then Home Minister Datuk Seri Hisham­muddin Hussein promised no retaliation toward Indonesians in Malaysia, assuring that they would remain safe and that there would be no backlash from locals. Indonesian Minister Widyarka Ryananta also spoke out against BENDERA’s actions, stating:

“We are very disappointed with Bendera’s foul abuse of the freedom of expression that is available in our country. They are just a minority group launching an extreme discourse,” – Widyarka Ryananta, as quoted in The Star

Seriously, not even our fault this one. A 2009 ad from Discovery Channel for the documentary Enigmatic Malaysia started off well enough, with the iconic Rafflesia flower in the opening shot. Then the next scene featured two traditional ‘pendet’ dancers and later some wayang kulit. Typical Malaysian stuff right?

Well…. not exactly. You know the meme about Indonesians claiming everything Malaysian? This isn’t one of those times: ‘pendet‘ is very much a piece of Indonesian culture. It’s actually a traditional dance from Bali, usually performed by Bali’s Hindu population during religious ceremonies. Our neighbors weren’t too pleased with pendet being credited to us, and this triggered many Indonesians.

Firstly, the Indonesian government claimed that pendet is just one of seven forms of culture we ‘stole’ from them between 2007 and 2012; the others included the Rasa Sayang song, batik and other traditional dances. Then there were protests on the streets, with protesters burning the Jalur Gemilang while chanting ‘ganyang Malaysia’. Our government websites were even hacked and vandalised on Merdeka Day of 2009. This was when BENDERA first got attention as they claimed they had 1,500 members ready to attack Malaysia. 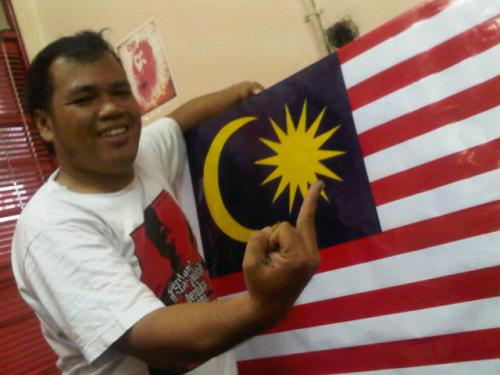 There is one solid reason behind the extreme reaction by some Indonesians over what seemed like a genuine error by Discovery Channel though, as pointed out by researchers Ali Maksum and Reevany Bustami:

“The reaction of some parties in Indonesia is seen to be quite extreme compared to that of Malaysia. This is largely due to the fact that the pendet dance dispute occurred within the scenario of internal political contestation of post 2009 presidential election in Indonesia. Consequently, anti-Malaysian sentiments were exploited in Indonesia,” – Ali Maksum and Reevany Bustami in a study on the pejndet dance issue

Despite everything, we’re still neighbors who care for each other

The ancient Majapahit empire once connected Indonesia, Singapore, Brunei and Malaysia under one roof, and it’s fair to say the history between our nations go way, way back. In fact, we had really great relations too til people began politicising and dividing for their own agendas. Ironically, while our nations may often argue over what culture comes from where, most of the time it is our similar cultures that unite us in the end.

Our artistes and movies do very well in Indonesia and vice versa thanks to the similar languages. Indeed, P. Ramlee was so influential in Indonesia that Soekarno had banned his films during the Konfrontasi period. Our relations reached peak friendzone during Mahathir’s first time round as Prime Minister too, with Mahathir saying he treated Suharto as a brother-like figure. Mahathir and Suharto way back when. Image from Tribun News