In case you missed it, the Malay Dignity Congress (Kongres Maruah Melayu) happened last 6th October 2019 at the Malawati Stadium, Shah Alam. The congress, which was participated by more than 20,000 people, was organised by four public universities:

According to the congress’ website, the main purpose of the congress was to collect and submit the demands of the Malay people to the govt to restore their dignity. The demands made were generally based on five clusters: politics, religion, culture, education and economy. Each cluster was presented by a speaker from various backgrounds. 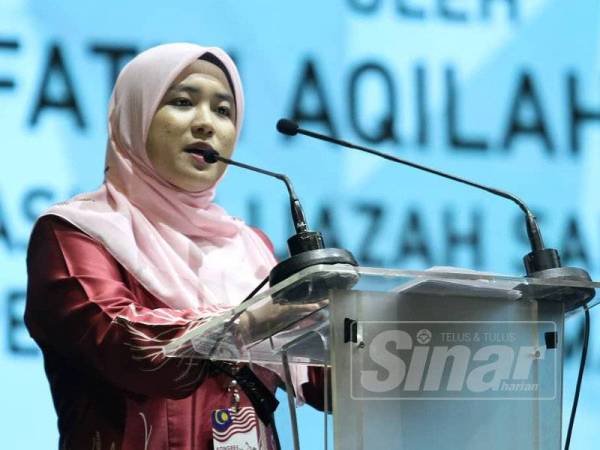 Yea, you may have heard a lot of things about the congress like the controversial speech by the chief executive of Congress secretariat, Zainal Kling, who talked about the position of Malays according to the Federal Constitution besides reminding the audience that the Malays are the rightful owner of the land. There was also the odd demand to give PTPTN exemptions only for high-performing Malays and even the food poisoning incident that affected 179 participants, who were all students btw. You can find out more about the resolutions here.

But being the kepochi we are, we decided to sit down for more than an hour to watch the full video of the congress (you can do so here or, for a shorter version, here) to find out what else we can find from the congress itself. After about an hour of watching the video, we spotted someone familiar.

The congress began with a silat performance and Zainal’s speech before proceeding with the presentation of the demands. The first demand on economics was presented by Universiti Teknologi Mara (UiTM) student Muhammad Syafiq Jebat, who demanded the govt to create agencies and policies that would help enhance the Malay economy.

The next presenter was Nurul Fatin Aqilah Rahim from Universiti Perguruan Sultan Idris (UPSI), who presented the education cluster, particularly on the abolition of vernacular schools. Yea, the demands on PTPTN mentioned in the intro were also presented by her.

As Fatin was presenting, there was a sudden cheer from the crowd. No, they weren’t cheering for her but for… When Dato Siti Nurhaliza appeared on the screen, she smiled and gave a smol thumbs up to the camera. She was there with her husband, Datuk Seri Khalid Mohd Jiwa.

We can’t really tell if she was supporting the notion of the congress (we tried checking her social media but nothing so far) but what we know is that she was reportedly present to perform a song entitled Warisan (Anak Kecil Main Api) when Dr Mahathir entered the stadium.

2. Rani Kulup was present too… with a special advice to the Malays

You may have heard of Abdul Rani Kulup Abdullah,seen his face somewhere or even heard of this tagline: ‘Kipidap, dongibab’. Does his face ring a bell? If it doesn’t, then click image to find out who he is.

We’ve even written about him four years ago when he was famous for lodging reports against alleged seditious online posts. But he may not appear in the media as frequent as he used to la.

You’d normally recognise him in his uniform so it was a bit unusual to spot him among the crowd in a traditional Baju Melayu! Rani Kulup said he attended the congress because it is deemed beneficial for the Malays regardless of political belief. He claimed that the Malays are now segregated so this congress is supposedly organised to bring unity.

Speaking of which, while being interviewed by KiniTV, he also advised Malays to stop envying each other.

“Malays are only envious of other Malays. You have to throw away all that feeling in order to restore unity among Malays.” – Rani Kulup told KiniTV.

3. There’s a theme song and pledge that were written based on… a historical document??

Yeap, and that includes this congress too.

The theme song is called Sumpah Anak Watan (which literally translates to the native’s vow) and, according to the Malay Dignity Congress’ website, it is the name of the document, which is deemed historical, that compiles all the demands based on the five clusters that were presented during the congress itself. As mentioned earlier, the demands were made based on a series of round table negotiations and academic workshops involving:

The document was then presented to Dr Mahathir at the congress.

As if a song wasn’t enough, the congress had even called upon all the audience to read the pledge entitled… Sumpah Anak Watan. #muchcreative The content of the pledge include things like the promise of each Malay person to restore their own dignity. The pledge was led by these guys. Screenshot from Astro Awani

While searching for this story, we found out that there’s a poem written by Adi Badiozaman called Sumpah Anak Watan. We managed to get in touch with the congress via Facebook, who clarified that its document, song and pledge have nothing to do with the poem.

NAH, BACA:
MACC names 41 entities that received 1MDB money. Here's a cheatsheet to 40 of them

4. The video presentation on evolution of Malays features one of the congress organisers

Besides the performance, presentation of clusters, pledge and speeches, the congress also showcased a video presentation called the Malay Dignity Congress video (seriously, can’t they name it anything else?). The 4-minute video is basically an evolution of the Malays in Malaysia. Err… we’re not sure which screen Mahathir (sitting in the middle) and the two guys were looking at. Screenshot from Astro Awani

The video began with the Sultanate of Melaka period and it continues with other historical events such as Malaysia’s Independence Day and May 13th.

It also featured some of the organisations that was created to help the Malays like FELDA and FELCRA.

Oddly enough, one of the things that was included in the video was one of the organisers of the event: UiTM. It was a short segment before the video showcases landmarks in Malaysia like the KLCC and Sepang International Circuit.

Besides that, it also featured successful Malays from various industries like the late P. Ramlee, Sudirman, three Malay scientists (no, we didn’t get their names based on the video itself) and Dr Amalina Bakri. It was pretty surprising that Siti Nurhaliza didn’t make it in the video considering her contributions to the country tho… :\

Heck, some were even sitting next to each other… …or even shaking hands with each other! Azmin Ali and Hishamuddin Hussein at the congress. Img from Malaysia Gazette via Syafiq Ambak

There’s also one photo of them on stage with Mahathir: The only missing person from the congress was Anwar Ibrahim, who claimed that by the time he received the invitation to the congress, he already had other plans.

One of the first things that Mahathir pointed out in his speech was that the congress isn’t about political parties but rather about the Malays. He also claimed that he was initially told by some people not to come to the congress but he did because the things discussed in the congress is related to the dignity of the Malays. So, Mahathir believes that he has the rights to attend the congress.

We tried searching for events that unite people regardless of political parties from the previous govt but all we could find is this picture of Anwar and Najib that was apparently taken sometime in 2010: Okay take this tea with a pinch of salt pls. Img from dinmerican.wordpress.com

6. Dr Mahathir admits that his 50-mins speech is… boring

Although the congress urged the govt to do many, maaaaannnnnnyyyyyy things to restore the dignity of the Malay people, Mahathir mentioned that the Malays must work hard to restore their own dignity. In fact, he added that the govt got no obligations to fulfill their resolutions.

“We will find a way. The Malays themselves must play a role to preserve the dignity of the Malay people.” – Mahathir, quoted from FMT. Translated from Malay. Mahathir delivering his speech at the congress. Img from FMT

Another thing Mahathir pointed out is how the Malays shouldn’t be complaining about getting low salaries. He said it’s a bit ironic for the Malays to complain when they’re the ones who simply receive the RM500 govt aid.

He also pretty much blamed the Malays for not taking up 3D – dirty, dangerous and difficult – jobs, which has been dominated by foreign workers. Mahathir also urged the Malays not to sell their lands, especially the Malay reserved land to other people, among other things.

After his long and repeating speech (yea, he repeated some points, especially on the 3D jobs), he admitted that his speech was boring. Around that same time, netizens have been commenting ‘bosan’ on Kongres Maruah Melayu’s Facebook live video.

Mahathir had also thanked the organisers for allowing him to give a ‘lecture’.

People like Rani Kulup and even Dr Mahathir pointed out that the congress is to bring unity and talk about ways to restore the dignity of the Malay people. One thing all of the attendees may have in common is how they viewed the congress: that it doesn’t cause harm to the unity of Malaysians in general. In fact, Dr Mahathir denied that the congress was being racist to anyone.

Ironically, in his own speech, he reportedly used the word ‘orang asing’ to refer to the Chinese and Indians during the British rule. DAP lawmaker, Ramkarpal Singh pointed out that the remark itself is insulting and uncalled for.

“The PM should know that such remarks are highly sensitive and threaten racial harmony in the country and can lead to a divided nation along racial lines, which must be avoided at all costs.” – Ramkarpal told Malaysiakini.

Anwar Ibrahim also commented on one of the congress’ resolutions – to reserve top ministerial posts for Malays and Muslims. He mentioned that those govt positions, especially Finance Minister, should be someone who’s qualified for the job and professional who cares for Malaysians in general.

Lim Kit Siang of DAP had also questioned the needs of these public universities to conduct this congress in the first place.

He added that there will only be dignity for all Malaysians if every ethnic and religion enjoys dignity by keeping with the fundamental principles in the Malaysian Constitution and the Rukunegara.

Nevertheless, whether or not the Malay Dignity Congress would become a major factor in our politics or just a small paragraph in our history, remains to be seen.