[Ed’s note: This article was originally published in Sept 2014]

What is it that makes Malaysians such bad drivers (that we even have a blog dedicated to our bad driving)? Hold up… at the risk of offending everyone (including the politically correct), please, allow us to rephrase that – why are Malaysians (among the many Asian nations that are) STEREOTYPED as bad drivers? Could it possibly be because of the actual, factual stats?

Not sure if we’ve done anything to mellow this persistent, universally held perception of Asians, but we did add fat to the fire, because WE have the 17th most dangerous roads in the world! Congrats. In this dark time of one nation’s shameless reputation for its mean streets, let’s sweep things under the carpet and facepalm over these Top 9 epic transport misadventures of Malaysia. Counting down…

9. I wanna be a Rempit Superstar

In true America’s Funniest Home Video’s style, this motorcycle fell into a drain, taking Mat Rempit with it. The brah could have totally avoided getting hurt if he had let go of the motorcycle at the last minute. Oh brah, oh why? Fail Level 9,000, lah you. *facepalm*

Did you know: The word ‘rempit’ comes from ‘ram-it’ (ram the throttle). According to Kamus Dewan, the definition of ‘rempit’ is ‘the act of whipping with a cane’. Hello, Kamus Dewan? This is the 21st century speaking. It’s time to revise your edition!

Stranger things have fallen out of vehicles and onto the highway than your average used tissue or drink can. A midnight accident on the North-South Expressway caused 10 and 20 sen coins to spill across the highway, according to Asia One. The armoured van that was transporting it burst a tyre, hit the highway guard rail and flipped on its side. Several motorists pulled over to help the security company personnel pick up the spilled coins, while others helped themselves to the change! Greed – one of the seven deadly sins. Image from transport.asiaone.com

In another incident, rice spilled out 20 metres long onto a road in Penang, when the 14-wheeler transporting it jammed on the brakes, stated Loh Tern Chern’s report in The Star. Motorists, passers-by and workers from nearby factories swooped in like vultures for a rice buffet. No use crying over spilled rice. Image from thestar.com.my

“I saw numerous foreign factory workers, armed with buckets and containers, rushing out from their workplace to collect the rice. I tried to stop them but failed as there were too many. Some of them even climbed into the back of the truck to get to the rice,” described the driver, who wanted to be known only as Liu, 46.

And CILISOS editor had a personal experience of a dramatic vehicle spillage one night at Damansara Jaya. A KK Mart truck overturned, giving birth to bottled water, glass bottles and tinned drinks all over the road. Good thing no one was hurt. You can check out more photos of the mishap on our Facebook page. Now there’s something you don’t see every day. Image from CILISOS.

Note: We’re laughing not at the armoured van driver, nor Uncle Liu, but rather at the contents spilled. Coins, rice… how could you not? A CILISOS writer has even seen packets of yee mee lying on a highway road before!

The drive was made less dreary for motorists along the North-South Expressway in June 2008, when they were treated to a one-man bogel show after a car collided into a mini lorry. The driver veered to a stop on the left lane and then climbed up to the roof of his car, gesturing strangely to passing vehicles, according to Funny Malaysia. With that kind of drama, you do have a strong defence for slowing down to take a kepoh look. Was he trying to channel his inner Rose Chan with a striptease act? Image from funnymalaysia.blogspot.com

We can’t tell what moves he was putting on, but we’d confidently bet it wasn’t the twerk or the Gangnam. Policemen and firemen tried in vain to coax him down, but in response, the guy stripped off his shirt! He then lit a ciggie, sat on the car rooftop and complained about the heat. It was only about an hour later, that policemen managed to grab the disturbed dude when he was caught off-guard. They sent him to a hospital. And that was the last we’ve heard of Bogel Man.

NAH, BACA:
A Tamil school with a Chinese name has only one Standard 1 student and it's a Malay boy?! Pohee.com shared this fail accident from The Star’s RM50 photo contest. Murali Sundareson won the prize for submitting this photo of a very scary, very dangerous accident where a car crashed into a petrol pump at the SS3 Shell Station. Thankfully this didn’t escalate, quickly or otherwise, into a mini Hiroshima copycat (minus the uranium).

After watching this video, we had mixed emotions – on one hand, we understand the frustration of the truck driver, but what about the other motorists he endangered, pushing that MyVi out onto the middle of the road? Then there were those cheering him on… -_-

According to Says.com, it was believed that the driver of the pickup truck had honked, but no soul showed up to attend to the MyVi. Well, if that’s so, he tried… still. And what’s more, the pickup truck (and every other car there) had not parked in a legit space to begin with. 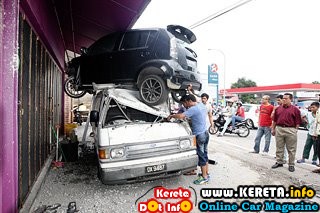 I’m captain of the cheerleading squad. Image from kereta.info 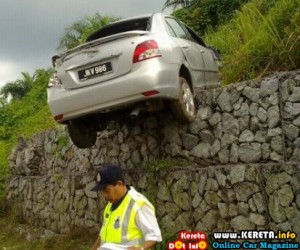 Don’t hate me coz i’m fabulous! Image from kereta.info

All Myvi and Vios drivers, check your car for a hidden fly mode button. Nawww, you wished! Here’s what really happened…

A Perodua Myvi spun out of control, rammed into a hill of sand and took flight. It landed not so gracefully on top of a van along Jalan Perkeliling, Kota Bharu. Kereta Dot Info reported the incident from Zaman Huri Isa Bharian’s Facebook post and urged Myvi drivers to learn a lesson from this accident. “This is a compact car which is very light and not stable. It is designed for city driving, not for high speed cruising,” stated KDI.

A silver Toyota Vios driven by an old lady crashed into a wall of a hill. How the car came to rest on top of the wall is anyone’s guess, reported Kereta Dot Info. You don’t s’pose… nah, UFOs aren’t real.

3. Looks like 8 is not be such a ‘lucky’ number after all

Someone had a little too much to drink and went on a real life bumper car rampage in the parking lot of Scott Garden, KL. What the actual tooooot?! Shame On You gave the scoop that the man damaged at least 9 other cars during his bumper-happy episode. As far as we know, no other humans were harmed in the making. Look at the damage you’ve caused! Image from shameonyou.asia

BTW, the drunk didn’t escape unscathed – he injured himself and you can see him bleeding in this picture. And then we were like, poetic justice has totally been served him, man. Righteous! He had attempted to leave the scene, but was too drunk to drive on home.

We couldn’t believe our eyes when we saw the pictures, but the bus really did fit in the drain like a hand to a glove. In fact, a friend of CILISOS said that it looked like Tetris. OMG, it does look like the Straight Polyomino in Tetris! And if you visualise the bus falling in slow-mo, you’d swear it was the real thing! ~ “A whole new world…” ~ The Star reported that the express bus from Melaka had skidded and landed inside a drain at Jalan Baru. Patrons at a nearby restaurant rushed to the scene and helped the passengers out. The rescuers had to break the front window to help them out of the beached whale, Siakap Keli revealed.

What’s a Malaysian transport poke fest without throwing in a KTM story that’ll stop you in your tracks?! Here’s a real story that happened to me (the writer of this article). It involved mountainmegatonnes of metal and a scaly reptile. 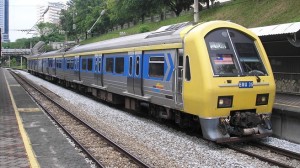 The the train, was rattling along at quite a fast pace, when the train suddenly jerked. It constipated for a short distance before halting for 15 minutes. Everyone was steaming at that point, wondering apa jadi nih? And then they made their funniest ever over the speakers: Never stood a chance. Image from Lekies on pixabay.com

Have a transport-fail story to share? Let us know in the comments section!