There was a time when we’d probably expel a tear or two every time we pump petrol and watch the price meter increase like a monster waiting for rip wallets apart. Now though, we imagine the heartbreak won’t be as deep, since you’ll probably be able to pump a Myvi with RON97 and not reach RM50 at full tank.

Well, while Covid-19 itself is a health crisis, it soon became an economic crisis as well, tanking industries like tourism and manufacture. And at the latest, it has also apparently tanked the crude oil industry. See, the reason we’re seeing such low prices in petrol today is because crude oil prices have been crashing all around the world.

At one point, crude oil price in the US even collapsed into the negative range on the 20th of April, 2020. Fortunately, it’s no longer in the negative territory for now, though things are still kinda dangerous. So in the midst of either complaining about how we can’t pump petrol anyway because we’re stuck at home or gaping at the cheap petrol prices we see today, we’ve also been wondering…

What’s the cause behind the oil price crash? Not this oil, by the way. Image from C4 Center

Due to Covid-19, many countries have put in place all forms of lockdowns or movement restriction policies, and that doesn’t exclude Malaysia. As such, when you stay at home without using your car, planes are not flying because nobody’s going anywhere, or manufacture’s simply stopped due to the MCO, it only means that no one needs oil, causing a fall in oil demand.

So, in order to curb the effects of Covid-19 on the oil market, the Organization of Petroleum Exporting Countries (OPEC), led by the world’s top oil producers Saudi Arabia and Russia,  scheduled a meeting in early March with oil producing countries to agree on cutting or reducing oil production by 1.5million barrels per day in 2020, and everyone had pretty much agreed. Even Malaysia, who’s not a part of OPEC, had agreed. Things seemed to be going swimmingly, until Russia refused to comply with the agreement.

And that kinda launched the oil market into a price war. In response to Russia’s refusal, Saudi Arabia decided to abruptly slashed oil prices by $6 to $8 per barrel to its customers in Asia, Europe, and the US on the 8th of March, 2020. And in a complete U-turn, instead of reducing production, Saudi Arabia reportedly wanted to increase oil production to over 10 million barrels a day. It was seen by some as a punishment to Russia and a way to gain a greater edge in the oil market in these trying times. But that didn’t quite work out as oil prices and stocks plunged by 30% as a result.

Oil prices continued to drop, stock markets continued to plunge, and things became so bad that apparently US President Donald Trump stepped up to negotiate terms with Saudi Arabia and Russia. And his infamous The Art of Deal might have come in handy, because it apparently worked, as Saudi Arabia and Russia managed to reach an agreement on the 10th of April this year, where all oil producing countries will cut oil production by 10million barrels per day. Image from Know Your Meme

Essentially, Saudi Arabia came out of the price war the winner, what with Russia agreeing to reduce oil production, but the win might have come a little too late. See, while the two countries were fighting with each other, there was no deal to abide by, so oil production apparently continued. And as we’ve mentioned above, even though oil production continued, no one needs oil now.

So that means only one thing: an oversupply of oil with no demand. And the concerns of the oversupply led to another thing: consistent fall in oil prices. Now, oil producers might be cutting down oil production, but if no one buys oil in the meantime, they’ll be running out of places to store oil. If demand continues to subside, well, at one point, oil producers might actually have pay customers to take the oil from them, which will send oil prices into the negative – something we saw briefly on the 20th of April this year.

At the latest update, international oil prices have remained in the red zone, and doesn’t seem to be improving anytime soon. Okay, okay, and now you’re probably wondering…

How does Malaysia come into play in all these? 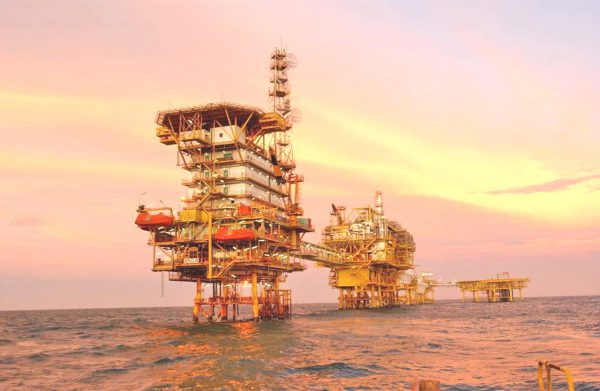 An oil rig in Malaysia. Image from Borneo Post

Well, for one, the oil market is an international thing, and almost every country is involved in the industry.

Malaysia has a pretty big presence in the oil market, being one of the largest oil producers in Asia, alongside China, Thailand, and Vietnam. We’re even ranked 25th worldwide in terms of oil production. It was reported that Malaysia produces approximately up to 624,670 barrels of oil per day, as of January 2020. And nearly 80% of it is made up of crude oil, while the remaining are things like natural gas liquids and bio-diesels. Image from The Malaysian Reserve

As you know, Petronas is a government-owned oil and gas company, responsible for all the oil and gas resources in Malaysia. According to Financial Times, it’s one of the seven most influential energy companies in the world.

Due to Petronas, Malaysia’s apparently managed to turn itself into the world’s second largest oil and natural gas exporter and producer in Southeast Asia. And it’s even been said that Malaysia produces the most expensive oil in the world, because we produce oil that’s graded Tapis, which is considered of the highest quality and most expensive grade.

Did you think we’re lying? Headline from Business Insider

As such, much of Malaysia’s income is generated from the production and exports of what is apparently the world’s most expensive oil – and, as we’ve said, a large part of the production and exports are controlled by Petronas. Over the last five years, Petronas has accounted for over 15% of the government’s total revenues, with oil-related products making up 9% of our total exports.

“In the 40 years following its corporation, Petronas alone has contributed a staggering RM881 billion to the government’s coffers in the form of dividends, royalties, duties and taxes.” – Economists Zukarnain Zakaria and Sofian Shamsuddin, as quoted from International Journal of Energy Economics and Policy

15% might not seem like much, but it actually helps out the government a lot in terms of tax revenues, employment, and energy purchase decisions. And apparently, we’ve only grown to be more dependent on oil revenues after the removal of the goods and services tax (GST) in 2018.

NAH, BACA:
Chup. This green tea from Cameron Highlands...IS MADE IN CHINA?!

So yes, we suppose it’s safe to say that… The oil price crashing doesn’t just affect the oil market, you see, it also plays a big role in the stock markets, whether locally or internationally. Usually, when oil prices low, it means an increase in the stock markets due to improved productivity from lower fuel costs and such. But this time, it’s different – oil prices didn’t just lower, they straight up crashed.

When one of the busiest industries has gone into such dire states, it apparently negatively affects what is already a nervous stock market due to the impact of Covid-19. People are uncertain of what the future is for the economy and for their businesses, especially for the oil sector, which doesn’t add much confidence to the stock markets.

And amidst the Malaysian stock exchange Bursa Malaysia, oil and gas stocks are typically the most active. However, Bursa Malaysia’s been pretty weak since the whole Covid-19 thing kinda tanked a lot of industries, but it’s only been made worse from the oil price crash. And it’s not just happening with Malaysia, but also other Asian stocks, like Japan and South Korea.

“The market is in the process of pricing a global recession.” – Deutsche Bank strategist George Saravelo, as quoted from Financial Times

The stock market after the oil price crash. GIF from Giphy

But it’s not just that. Even though there are a lot of global players in the oil industry, there’s a petrodollar system going on in the oil industry, which is the standardization of oil trading in USD. While it was initially constrained to only the US and OPEC countries, other countries have been following suit as well, making at least 60% of international oil trade to be done in USD.

While it’s not usually a problem for Malaysia, it’s become quite a problem now. As the oil prices and stock markets continue to decline, the weakened Ringgit Malaysia against USD isn’t really helping much as well. The worsening exchange rate is making it more difficult for Petronas, what with high production costs.

And all these may only make things worse for the Malaysian economy. It’s been said that Malaysia is likely to lose around RM31billion in revenue this year due to the oil price crash, given that Petronas accounts for a significant sum of government revenues. This can mean that we won’t be able to meet the targeted gross domestic product (GDP) growth rate as predicted previously.

“Petronas, as a 100%-owned national oil company with sizable international presence, is hurt by low oil prices. With less revenue, it becomes more challenging to make the same amount of capital expenditures and pay dividends to the government.” – Oil and gas sector analyst Renato Lima de Olivera, as quoted from FMT

Petronas claims to have it all under control

With the oil price crash, it means that petrol prices have been following suit as well, where it’s been lowering consistently over the past several weeks. So that means that we, as consumers, get to enjoy relatively cheaper petrol as a result. But then again, it probably won’t mean much given that we’re pretty much stuck at home with nowhere to go.

In the meantime, Petronas has claimed that it has everything under control and won’t be changing their business direction for 2020 just yet. It also maintained that it’s gonna pay the planned dividend of RM24billion to the government this year.

In order to cope with the oil price conditions recently, the oil company said that it will reassess existing plans and budgets to be able to cushion its expenditure. But for now, operations are still ongoing as usual, where 18 rigs are still in operation to dig up natural resources in Malaysian waters. Still, in accordance to the OPEC agreement, we’re also one of the countries that’s agreed to cut oil production, but only by 136,000 barrels per day in May and June.

“In line with the efforts undertaken by OPEC and non-OPEC countries, Malaysia reiterates our strong commitment to preserve the stability of the global oil market.” – Economic Affairs Minister Mustapa Mohamed, as quoted from Reuters

But of course, that’s just what the company’s saying for now. Oversupply and running out of storage seem to be the biggest concerns for the oil industry currently, but the oil price situation’s reported to have improved marginally in the last few days. However, given that the recovery’s only just begun and we still don’t really know what’s gonna happen in the future, it’s still too early to be happy about that. All we can do is wait and see whether the OPEC agreement to cut production will help and if the crisis will subside soon to allow the industry to recover.