Before we begin, here’s an important announcement:

By the way, this is Pusheen the Cat. Please check out her website for some tak tahan cuteness :3

Okayokay… back to topic. So CILISOS depends a lot on news headlines in order for us to gauge what’s relevant and then add sos to it for ugaiz to read. However, some types of headlines have popped up so often that we’ve either gotten bored of it ourselves, or applied the #toosoon label and would rather not talk about it if we could.

For the forthcoming year, we’ve compiled a list of headlines that we hope to *NOT* see anymore… most of them are so common that you can literally fill in the ____________ yourselves. Literally.

(The word was “blanks” in case you were wondering)

Screencapped from Channel News Asia. Click to link to article

Well, it really isn’t what he’s charged with (cause we all know what the charge will most likely be) but what he’s going to be charged with again. That being said though, with his November verdict being delayed to an unspecified date (which is definitely in 2015 by now), we might not be seeing him charged with anything for awhile if he’s found guilty. We’ll leave it up to you to decide which the better option is. Screencapped from The Star. Click to link to article.

It’s not been a good year for our aviation industry, with two planes down and one still missing. While we can talk about how companies are being managed or who is to take responsibility, we’d really rather have NOTHING to talk about in this category at all. The floods currently affecting the east coast are one of the worse in decades. We’re written about how bad the situation is and what Malaysians can do to help, and a follow-up article about the different ways Malaysians are helping the flood victims. Also, with the National Security Council admitting that they messed up in responding to the situation, we wonder if any lessons can be learnt if such a thing were to happen in the future.

Oh, by the way, we just noticed the screencap we uploaded was from last year’s floods. We apologize for the error.

But really though, perhaps the better thing to do in this situation might be to do prevent it; with even the Sultan of Kelantan urging people to “not mess with the environment” Screencapped from International Business Times. Click to link to article

Well, we kind of had a choice between this or “_____ TAK HALAL” but we went with the fatwas since it’s more of a statement of learned opinion and is not binding whereas halal-ness pertains (mostly) to dietary laws as well as the treatment of animals that we use for food. Yes, we know most of you are gonna say “But what about the Cadbury incident?”  It was really a one time thing and, if there really was porky DNA in the bars (Note: there wasn’t), it would have been quite a cause for concern. Can’t really say the same about yoga.

Having said that, many fatwas do stem from good intentions, like the fatwa against smoking. But those have probably already been set, which means that the new ones will most likely be ridonkadonk. Screencapped from The Straits Times. Click to link to article

Penang has become both a local and foreign tourist attraction over the years for its culinary heritage and it’s been something Penangites have been rather proud of. With Penang Chief Minister Lim Guan Eng enforcing a ban preventing foreign workers from cooking at hawker stalls since it might compromise the authenticity and taste of the food, we figure the general acceptance of the ruling might encourage the state to enforce similar bans on other areas that have come to be associated with Penang’s cultural heritage.

Let’s hope not. Cos deep inside, we’re all foreign cooks. Do check out our article on this topic as well. Screencapped from Free Malaysia Today. Click to link to article

This whole Goods and Services Tax (GST) thing has been a neverending source of speculation and confusion for many people, particularly everyday Malaysians who would “suddenly” find some random item being listed as GST-chargable. The latest addition to this list, going around Whatsapp and Facebook, is a 6 sen charge to the RM 1 transaction fee for MEPS ATM withdrawals. While this doesn’t seem like a lot at first glance, think of how much more often you’ll have to withdraw money to cover the additional costs incurred by GST.

While we can accept that any new implementation will have teething problems and people not being happy about it, at least announce everything one shot in a way that the regular rakyat can understand la! Okaylah. To be fair, we should expect to see this with the removal of petrol price subsidies. Actually, petrol prices are expected to end the year a little lower as crude oil prices continue to fall, but that only gives it more room to go up next year. Too many to choose from, so we made a montage

The rainy season has given us some forgetfulness about the haze situation, but you know that once we reach the dry season, it’ll be the same darn thing again. Let’s hope this year with Jokowi heading up Indonesia, that maaaaaaaaaybe, please please please, hopefully it will be different this year. We like our coffee here at CILISOS, and we like our cakes and cutely-named sandwiches as well, but the irrelevant/random/”non-conformist” hipster naming scheme has got to stop! As it is, we already can’t differentiate the Angry Artisan from the Grumpy Tortoise so why not try a different scheme like…. puns? Here are a few we’ve come up with: Screencapped from The Malaysian Insider. Click to link to article

After every UMNO General Assembly there will be the inevitable reports and opinion columns about how non-Malays are still encroaching on Malay rights, etc. etc. Even Prime Minister Najib has acknowledged that this does happen among “one or two UMNO leaders,” although adding that it isn’t representative of the party’s beliefs as a whole.

While we do think that the public should know of what goes on at the General Assembly, we wish news like this would be paid less attention to. Even more so, we wish that people who speak at the assembly would stop making such provocative statements. That being said, we can’t completely place full blame on our leaders all the time since there’s also a matter of……. There are two parts to this: the first, being in the online (sorta) journalism business as well, we understand that news gotta sell. With the number of different news portals reporting on the same issue, we try to come up with headlines that’ll best grab the viewer’s attention while still conveying the gist of the story. The problem with this is that sometimes, the headlines can become sensationalist and misleading. The second is just plain ol’ human error when we either fail to grasp context or mistranscribe something. For example, 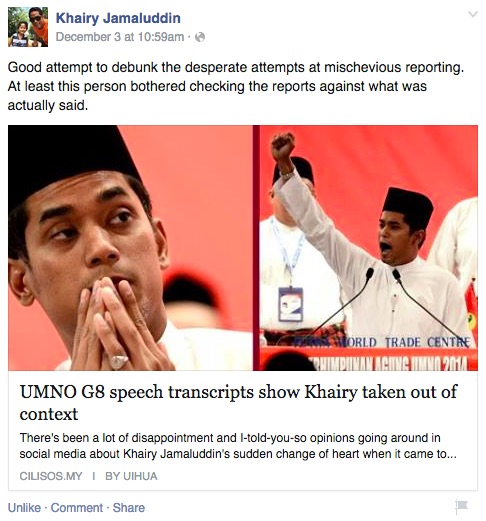 Back when Khairy was getting a whole lotta hate for his alleged racist comments during the UMNO General Assembly, we like to think we broke the story when we stumbled upon the transcript of his speech. We even got a mention in NST Online and The Star 😀

From The Star Online. Click to link to article.

We legit yo! No longer a blog! Over the past year, there have quite a few incidences of LRT construction-related accidents leading to the injury and loss of life of migrant workers. In fact, one just happened at Putra Heights on Christmas eve. It’s not just LRT-related too… there was a mine explosion in Sarawak involving North Koreans.

But at the core of it, perhaps the bigger issue here is an apparent lack of safety precautions that we need to see improved on, or perhaps even a lack of appreciation of these laborers we barely see as equal human beings.

Screencapped from The Straits Times. Click to view article.

There’s been a spate of murders involving Myanmar nationals in Penang over the past year. The news of these cases have remained fairly low-key until they started forming a pattern, with most of the bodies found with limbs severed. And 18 of them so far.

Really, the only headline we want to see related to this is/are the case(s) being solved. You know… cause Rosmah is already being unfairly targeted by haters despite the positive news she’s generating, so we don’t want to make things worse for our First Lady la. #kitakawan You know… cause Najib is already being unfairly targeted by haters despite the positive economic policies he’s generating, so we don’t want to make things worse for our esteemed leader la. #kitakawan You know… cause Ridhuan is already being unfairly targeted by haters (he was banned from entering Sarawak to talk at an event, which is a total denial of his right to free speech) despite the positive academic opinions he’s generating, so we don’t want to make things worse for our national akademician la.

On the topic of free speech, it works both ways. Everyone should have the right to speak, even if they’re total idiots. #kitakawan We usually try to not dampen the mood on holidays, so we did our best to inject a bit of humor here and there despite how serious and prevailing some of these issues are. Even though it gives us less stuff to write about, we honestly do hope to give these headlines a skip in 2015.

But if you’re depressed thanks to this article, here’s Pusheen doing the Gangnam Style

And again, Happy New Year Everyone 😀