As humans, we’re naturally attracted to scandals and political drama, with these topics becoming dinnertime conversations and the like. For example, Malaysia’s been shaken by financial scandals quite a few times in recent years, with the latest one being former Finance Minister Lim Guan Eng’s graft charges.

Speaking of financial scandals though, none of them has exactly been as earth-shattering as former Prime Minister Najib Razak’s 1MDB scandal. And on the 28th of July, 2020, Najib was found guilty of seven charges that are related to the scandal, sentencing him to 12 years in jail.

Actually, we’ve written quite a few articles about 1MDB already, so you may be wondering what else can we even write about 1MDB that you wouldn’t know about. Well, we’re gonna talk about this Indonesian fella Djoko Tjandra. 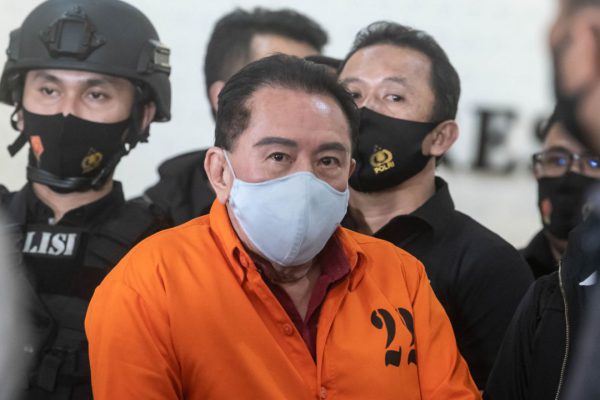 Djoko was recently arrested on Malaysian grounds, but it’s not for 1MDB. He was apparently a fugitive from Indonesia running away from his home country due to alleged corruption charges, but apart from these corruption charges, some have been claiming that he has ties to the whole 1MDB shebang as well. If y’all have been catching up with 1MDB all this while, you’ll know that the Tun Razak Exchange (TRX) project kinda landed in hot water due to its affliations with the formerly government-owned fund. And then ownership of the project was transferred over to the Finance Ministry in 2017 because they couldn’t secure sufficient funds for the project due to its ties with 1MDB.

However, it turned out that 1MDB had been selling parcels of lands in the area to develop the TRX district, and one of them was a Jakarta-based developer Mulia Group to build the Exchange 106 building smack dab in the middle of the financial district in 2015 – you know, that looks like a…um, nevermind.

And apparently, Indonesia’s most wanted fugitive Djoko Tjandra used to own Mulia Group.

Mulia Group’s apparently a pretty large property development company in Indonesia, owning stakes in numerous hotels, shopping halls, and residential projects. The group was reportedly founded by a fella named Eka Tjandranegara, along with his father and two brothers, one of which is, you guessed it, Djoko Tjandra.

Since the beginning, the transaction between Mulia Group and 1MDB for the Exchange 106 building had been considered pretty shady. Before Mulia Group came in the picture, the building’s development was apparently supposed to go to Lembaga Tabung Haji, but the deal fell through for some reason. And only six weeks after, 1MDB announced that it had reached a deal with Mulia Group.

“As one of the biggest commercial property developers in Indonesia, we are excited to be embarking on this project to develop the Signature Tower.” – Mulia Group president director Tjandranegara, as quoted from The Star

Plus, it was also later found that while 1MDB had purportedly sold the land to Mulia Group to build Exchange 106, it apparently still had a 51% stake in the building and Mulia Group only 41%! And that was why the whole project came under scrutiny in the first place, because it was suspected that 1MDB had misappropriated funds for the project to settle its debts.

So yeah, it appears that the transaction itself already seemed kinda weird. But Djoko’s alleged involvement may have made it shadier, because… 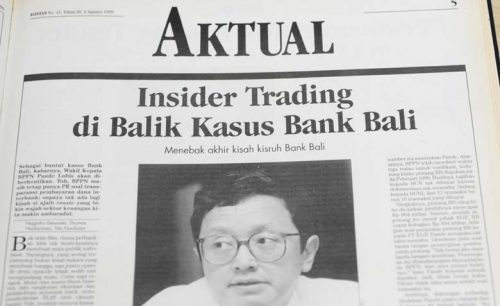 So in 1999, Indonesia was plunged into a financial scandal of its own, where Bank Bali, one of Indonesia’s biggest banks, was found to have been involved in a corruption scheme with an Indonesian political party, Golkar Party. It was aptly known as the ‘Baligate‘.

We’re sure y’all know about the Asian Financial Crisis in 1997, or you’ve at least heard about it. Well, let’s just say that the banks in Indonesia didn’t really do well, and Bank Bali found itself with a lot of outstanding loans with a number of banks that the Indonesian government had taken over. For real, Bank Bali ended up being owed Rp1.235 trillion in total.

And because Bank Bali would risk getting absorbed by the government as well if it doesn’t recover the money soon, the bank’s then-president Rudy Ramli apparently decided to turn to a debt collector agency PT Era Giat Prima (EGP) to help him recover the loans.

“If everybody is going to die, we want to be the last ones to die.” – Ramli, as quoted from New York Times

And this is where it gets interesting, because the company was led by Golkar Party’s deputy treasurer Setya Novanto…and Djoko served as a director in the same company. Some have even said that Novanto approached Ramli himself, but there’s no confirmation to that.

The EGP actually did help Ramli recollect the outstanding loans from the Indonesian Bank Restructuring Agency, a government agency meant to handle all the failed banks’ affairs. However, it turned out that there was a catch – Djoko apparently struck a deal with Ramli that EGP would be taking a 60% commission from the recollected money, so Ramli ended up getting his money back but also having to pay a whopping $70 million to EGP.

NAH, BACA:
5 Types of Shops That Are Always On Sale In Malaysia

Upon investigation by the authorities, they discovered that Djoko had siphoned off some of the commission money to a private bank account, while the rest were distributed among a number of Indonesian lawmakers. Oh, and it also sorta became a political scandal when Ramli stated that part of the cash went to support the reelection campaign of then-Indonesian president BJ Habibie, who, coincidentally enough was also the leader of Golkar Party.

“It is about huge sums of money involving people in high places, if not the president – an allegation yet to be proved – then certainly people in his circle.” – The Jakarta Post, as quoted from Scoop

At the end of the day, a number of Indonesian officials went under investigation and were brought to trial. But Djoko, who pretty much had a hand in orchestrating the whole thing, basically fled the country to Papua New Guinea in 2009 to avoid conviction. He even became an Interpol fugitive as a result. 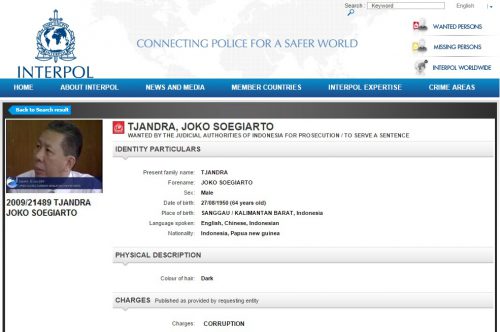 Now, we’re not saying it’s connected, but it seemed odd that Djoko, who was already involved in a pretty big scandal back home, would turn out to have ties with a company that’s working together with 1MDB. But Mulia Group isn’t the only thing connecting Djoko with Najib, since apparently…

So right now, as we’ve mentioned earlier, Djoko’s finally arrested after a decade on the run, and he’s gonna undergo investigations like his suspected cohorts did. And there was someone named as a graft suspect in the investigation papers by the Indonesian police that got us all like…wtfqwertyptptn?

And that guy is Tommy Sumardi. 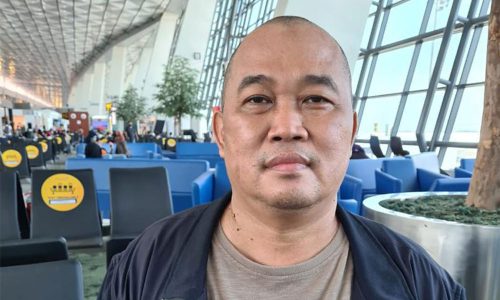 So why is Tommy named in the investigation papers at all? Well, apparently, it was claimed that the guy was a known close friend of Djoko and Setya, you know, the guy who was leading the company that allegedly extorted Bank Bali.

And yeah, in relation to that, some have even said that the business relations between Mulia Group and 1MDB started partly due to Tommy’s friendship with Djoko. This is because…Tommy is Najib’s in-law! O.O

However, Tommy wasn’t named in the investigation papers for 1MDB – it was because the Indonesian authorities suspected that he played a part in bribing two senior police generals to remove Djoko’s Interpol red notice status and allow him to travel again. The two police generals were subsequently removed for allegedly accepting the bribery.

“The alleged involvement is that in April 2020 Tommy allegedly asked Brigadier General Prasetijo Utomo to introduce the officials at the International Relations Division of the National Police Headquarters who oversees NCB Interpol Indonesia.” – Boyamin, as quoted from MBS News

Whether or not Tommy really did bribe the police generals to help Djoko remains to be seen. But despite Tommy’s purported involvement, it doesn’t seem like Malaysian authorities have been actively protecting Djoko during his stay here or were even aware of his presence here, given that…

PDRM’s been working with Indonesian authorities to capture Djoko

While Mulia Group had long since denied Djoko’s continued involvement with the company, Malaysiakini apparently sighted an employment document that suggested that Djoko had come to Malaysia as an operations and development director for Mulia Property Development, an arm of Mulia Group. Therefore, it appears that Djoko’s relationship with Mulia Group hasn’t totally ended. 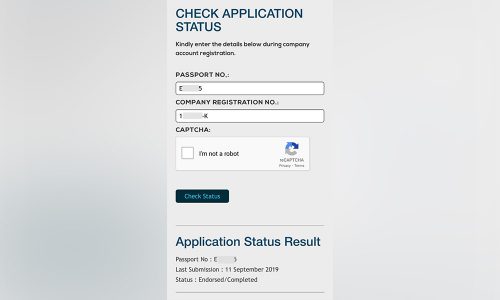 But then Djoko apparently even managed to find his way back to Indonesia in June this year, courtesy of the police officers that Tommy had allegedly bribed. That kickstarted a joint effort between Malaysian and Indonesian police officers to arrest Djoko once and for all.

“The police should examine the possibility that more National Police top brass are involved in covering Djoko Tjandra’s tracks.” – Indonesia Corruption Watch, as quoted from The Star

For now, Djoko’s serving a two-year sentence in prison for the Bank Bali scandal, and is still under investigations for…more corruption. As for his seemingly shady connections with Najib and 1MDB, as we’ve said, they could all be coincidental. Or maybe not. We can only keep our eyes peeled and see whether it’ll be brought up in the current investigations that are being held against Djoko right now.

After all that, it does seem to us like Djoko’s always had a few tricks up his sleeves to get his way, like robbing a bank, running to Papua New Guinea, and getting a new passport to return to Indonesia. But still, if there’s anything to be learned about Djoko’s colorful history with political scandals and being a fugitive, it’s that things will always come back to bite you in the behind no matter how much you try to escape it. So, you know, keep your hands clean and don’t do crime!