The Sidek brothers, Mokhtar Dahari, Datuk Nicol David, and Dato’ Lee Chong Wei. These are all names we as Malaysians are familiar with and are fond of. Whether we look up to them as our own heroes or whether we give them praise for the service that they have done for our country, pretty much all of us can agree that these guys are badasses in their own right.

Which is why here at Cilisos, we think that there should be another name added to this list… and if you thought it was gonna be the guy on the left in the picture above… it’s actually the guy on the right. His name is Nigel Richards.

Who’s this Nigel feller? And what’s he gotta do with Malaysia?

Where do we start… let’s just say that Nigel is to Scrabble what Michael Jordan is to basketball, what Serena Williams is to tennis, what Tiger Woods is to golf, and what Lionel Messi is to football (he has been compared to a few more sporting legends than this, but you probably get the point).

This isn’t to say that he’s just a great Scrabble player, which he is. He is widely considered to be the greatest Scrabble player of all time… and the most surprising part is, Nigel actually lives in Malaysia (!!) and represents us at international competitions (!!!).

Originally from New Zealand, Nigel was first introduced to Scrabble when he was 28 by his mother who was tired of him beating her at every game of cards they played. Because he hadn’t gone to university, “couldn’t spell very well“, and “wasn’t very good at English“, she figured Nigel wouldn’t be good at Scrabble either.

This would be some next level salah sangka man.

Shortly after, Nigel Richards took part in his first New Zealand Scrabble Championships… and the rest is history. He has since been coming in first place in most of the major Scrabble competitions around the world including the US Championships five times, the UK Open Tournament seven times, the Singapore Open Championships eleven times, and the King’s Cup in Bangkok thirteen times.

He is also the only player ever to have won the World Championships more than once, having been world champion three times! Depending on the competition and the rules, Nigel may represent New Zealand at some events and Malaysia at others. For example, in the Causeway Challenge competitions between Malaysia and Singapore, Nigel has been playing for Team Malaysia against our neighbors south of us since the competitions were first held. Not just that… shortly before this article was written, Nigel had also taken part in an International Scrabble competition at the Summit USJ in Subang Jaya where he came in first place! Nigel with Muhammad Ali Ismail, the founder and president of the Malaysian Scrabble Association.

He also won the French Championships… but he DOESN’T EVEN SPEAK FRENCH!

If you are impressed now, we’re not even done yet. See, the achievement that really threw Nigel into international headlines was when he won the Francophone World Scrabble Championships in 2015, after memorizing the French dictionary in just nine weeks. This would be equivalent to Cristiano Ronaldo picking up a basketball, bouncing it for the first time, and then winning the NBA after practicing for just that amount of time. Add this to the fact that Nigel won despite not actually being able to speak French! A close friend said he had memorized the dictionary without knowing any of the words’ meanings. It got to the point where during one of his matches in the final, Nigel was able to correct his opponent and challenged their use of a wrong word in the game! At the end, he even needed a translator to thank the audience during his winning speech.

Nigel’s ability in Scrabble has been credited to him having a photographic memory. He apparently has a mathematical ability to recall the position of letter combinations from memory, simply by having seen them before. And at the highest levels of the game, Scrabble is more a game of maths than it is of language. But… if you were to ask him how he does it, all he can tell you is this.

“I’m not sure there is a secret. It’s just a matter of learning the words!” – Nigel Richards, in an interview after winning the 2011 World Championships. Do you even math bro? Original image from Anthony Bonato

NAH, BACA:
From poop parasites to durian-sized tumours... 5 realities of working in a Msian hospital lab

But how the heck did he end up playing for Malaysia?

Haaa… so here’s where it gets interesting. In 2000, Nigel was offered a job in Malaysia by a Scrabble fan and he has been living in the country ever since. When he moved to Malaysia, he started doing programming work as his math skills made him a natural at coding. He had competed in and won a number of big money tournaments during his early years in KL, and he used his winnings to invest in properties.

With various Scrabble profiles of Nigel registering his home country as Malaysia, Nigel is even described as a New Zealand-Malaysian professional Scrabble player internationally in competitions. When he won the French Scrabble championships in 2015, he had actually been working for a security company in Kuala Lumpur, looking at CCTVs as part of his job. Where we see letters, Nigel sees the universe.

In fact, Malaysia has one of the strongest track records in international scrabble, with several world class Scrabble players having represented Malaysia. The 2007 Malaysian team at the World Championships was made up of Suanne Ong and Ganesh Asirvatham, who are both legends of the game in their own right.

Suanne had become the first Malaysian and first female World Youth Scrabble champion in 2009 at age 16, and had also beaten Nigel the year before to take first place at the King’s Cup scrabble competition in 2008 when she was just 15.

Ganesh, on the other hand, was the guy Nigel had to beat in 2007 to become the World champion that year. Prior to Nigel’s win over him at the 2007 Championships, the both of them had played each other twenty times, with Nigel only beating Ganesh once before. Ganesh, a former English school teacher from Klang, was at that time the world number one and Guinness World Record holder for the most games of Scrabble played at once.

“At that point in time (during the 2007 World Championships), I had decided to focus on Scrabble to prove that I could be the best player in the world. Nigel and I were peers then and in our games in Malaysia, I would typically gain the upper hand over him. Unfortunately my streak came to a halt during our 3 game final when he soundly defeated me”. – Ganesh Asirvatham, in his interview with Cilisos. You’re pretty much looking at the Nadal and Federer of the Scrabble world in this picture.

Even today, Nigel is a familiar face among the Scrabble players in Malaysia, especially in Kuala Lumpur. Alex Tan, who is the secretary and former president of the Malaysian Scrabble Association, describes Nigel as very humble, very quiet, but friendly to those who know him. He is said to not own a TV or radio while living here, doesn’t drink or smoke and is unmarried, without kids.

Nigel rarely if ever gives media interviews, and while he is mostly calm, the only time he shows any emotion is when reporters are trying to interview him. Alex said that Nigel was especially irritated when he saw that there were news articles describing him as a vegetarian, when he isn’t. He doesn’t particularly like the food here that much, and thinks Malaysia is too hot. But possibly the main reason he has chosen to live in Malaysia is because we are “friendly, but private” here in this country, which fits him and his lifestyle. 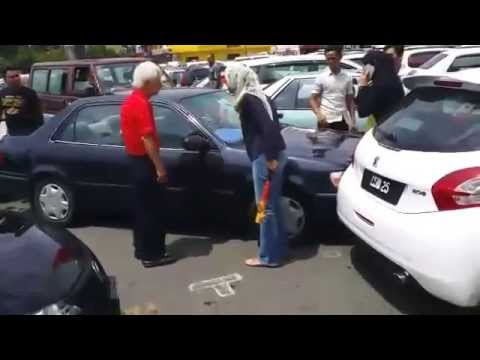 Friendly until we get on the road la. Which is probably why Nigel prefers cycling instead.

Walao… so Nigel really is among the great Malaysian sportsmen of all time. 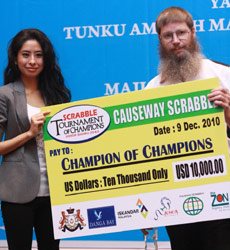 But apart from one article on him by The Star and another by The Malay Mail, he hasn’t received much attention from Malaysia outside of the Scrabble scene here, although this is probably just the way he likes it. Even for our own champs like Ganesh and Suanne, there hasn’t been much recognition and support for them to represent Malaysia internationally. The parent of one youth player interviewed by Cilisos mentioned that his son had represented Malaysia at the World Youth Championships in Perth on his own sponsorship.

“Scrabble isn’t a spectator sport. People understand the game that they played as kids or with their family, but competitive Scrabble is a different beast altogether”. – Ganesh, on the reason behind the lack of support for Scrabble in Malaysia.

Organizations like the Malaysian Scrabble Association and the Scholar’s Scrabble Club which are affiliated with the Malaysia Sports Commission do not receive funding and instead rely on membership fees as well as funds from organizers themselves. However, they are active in running events throughout the year, many of which Nigel often takes part in himself.

You can often even see him in action by going to some of these events, but eh… if ugaiz do go, don’t altogether ask him for a selfie ok. 😉