Imagine you’re chilling at home when suddenly police officers barge into your house and tangkap you. After interrogating, the religious officers pulak come and take you away to a religious rehabilitation centre.

If ugaiz haven’t heard it already, activist lawyer, Siti Kasim was recently remanded under Section 186 and 363 of the Penal Code for obstructing public servants from doing their duties and kidnapping respectively. She was reported to have helped a 24 year old woman, Anis Izzatty who was trying to escape her ‘controlling’ mother. But Siti was later released. Siti Kasim (third from left) was arrested. Image from The Star

Anis who was questioned by the Selangor Islamic Religious Department (JAIS) was said to have been ‘abducted’ by the religious body. She was taken for a mental health assessment at Hospital Kajang as her mother claimed that she was mentally unstable and that her akidah (faith) was in question. She was later released too.

But this wasn’t the first case. Another woman, Shaqirah went through the same experience.

“My friend was reported as deviant and an atheist. So, she was questioned by JAIS and soon after was sent to rehab centre. Siti Kasim was involved with her case too. But it wasn’t this big (referring to Anis’ case).” – Terry, Shaqirah’s friend told CILISOS.

However, unlike the first case, Shaqirah was placed in one of Islamic Rehabilitation Centre after being interrogated. She spent more than 6 months there before, based on Terry, she escaped the centre. But wait a minute…

And they’re legit gaiz. But some might have never heard of it before. We managed to get in touch with the Head of Department of Baitul Iman, Ustaz Izhar to get more information on these centres, particularly Pusat Pemurnian Akidah Baitul Iman in Ulu Yam, Selangor. According to him, the centre which began its operation in 2000 was founded to provide guidance and counselling services to individuals and groups of Muslims who needed to restore their faith.

An academic paper which was presented at the Law and Muslim World International Conference by Mohd Al Adib Samuri stated that this centre could house 100 patients at a given time. The administration and management of this centre was said to be based on the Rules of Baitul Iman’s Islamic Rehabilitation Centre, which is one of the JAIS Director’s Permanent Order. Apparently, based on Morning Star News, a religious website, there are three Islamic Rehabilitation Centres in Malaysia. Two of these centres are located in Peninsula (Selangor and Negeri Sembilan) while another one is in Sabah.

The facility in Negeri Sembilan was said to be smaller compared to the one in Selangor. Morning Star News reported it was closed due to lack of patients, a remainder had been moved to an internment camp in Kamunting which operated under the Internal Securities Act (ISA).

But, Pusat Pemurnian Akidah Baitul Iman which receives an annual budget of RM 400,000 through zakat fund also serves as a detention for Syariah offenders in Malaysia.

“(The centre is) Fully funded by Lembaga Zakat Selangor under asnaf (those who receives the zakat) al riqab.” – Ustaz Izhar told CILISOS. Translated from BM.

Wait… Where are all their patients from?

There are two types of patients in Islamic Rehabilitation Centre; Syariah offenders and voluntary patients.

“It could be from court cases when offenders are arrested by JAIS officers and held for trial. Or it could be voluntarily when family or individuals seek help with Al Riqab Rehabilitation Department. Discussion will be held to look into the appropriateness of cases before deciding whether they should enter the centre or go for counselling outside (the centre).” – Ustaz Izhar.

Basically, the Syariah court has the power to convict a person to a rehabilitation centre under Section 54(1) in Syariah Criminal Offences (Selangor) Enactment 1995:

“If any Court has convicted any person of an offence under Part II or under section 9, 10 or 11, such Court may, in lieu of the punishment specified for such offence, order such person to undergo counseling or rehabilitation in an approved rehabilitation centre for such period not exceeding six months as may be specified in such order”

So, the court gets to choose the centre as an alternative to imprisonment or as a first-choice sentence.

There are actually three categories of offences that may cause detention in the rehabilitation centre. Offences related to akidah (faith) are like declaration of being non-Muslim to avoid action taken against him under the Enactment and false claims. An example of false claim would be the cult leader Ayah Pin who also founded a sect called the Sky Kingdom. He was believed by his followers to be the reincarnation of Jesus, Buddha, Shiva, and the prophet Muhammad. The late Ayah Pin with his Sky Kingdom. Image from Wikipedia

Another category of offences would be related to the sanctity of Islam and its constitution such as insulting the verses of the Quran or Hadith and destroying or defiling the place of worship. Offences related to decency includes incest, indecent acts in public place and khalwat among other offences.

However, while researching for this article, the writer came across one pattern of those who masuk these centres; apostates. Some of the search results on Google. Even the suggestions were related to apostasy. Screengrab from Google

And although there were cases shared by former patients, Ustaz Izhar denied the statement.

“In Selangor, apostates aren’t detained in the centre. They will follow a consultancy session at the faith advisory unit in Jabatan Mufti Selangor. But you will have to look at other state’s enactment if apostasy cases happen outside Selangor.”- Ustaz Izhar.

Besides Syariah offenders, there are those who voluntarily enter the centre.

“Those who enter voluntarily are adults aged 18 and above who normally have social issues. They can be present at Selangor Islamic Religious Council’s (MAIS) Al Riqab Rehabilitation Department in Klang to discuss more and to see the appropriateness of the case.” – Ustaz Izhar.

He also mentioned how some teenagers aged 13-18, who are normally dropouts, were sent by their families to the centre.

NAH, BACA:
Why did this FBI-investigated Imam come to Malaysia?? ಠ_ಠ

Some were reported to have been detained for… three YEARS?

You might be wondering what the patients do in the centre. Aside from the usual al-Quran recitation classes, daily guidance sessions and prayers, the Islamic Rehabilitation Centre in Ulu Yam conducts community service and aerobics on Saturdays. In fact, they have hands-on workshops such as handicraft and gardening/farming workshops.

Ustaz Izhar said even teenagers at the centre would have to go for academic classes besides religious ones. So, how come there are claims about how horrible it is? Classroom at the centre. Image from Morning Star News

It was reported by CBN TV that some patients weren’t treated right. In one case, a young lady who claimed to be a former patient was taken from her workplace, interrogated and placed in one of the religious rehabilitation centres without any legal representation or court proceedings. Her accounts in the centre was described by Morning News Star:

“The warden and staff quickly discovered that she knew more about Islam than they did, and instead of teaching anything, they tried to entice her back to Islam with the “charm approach.  After many months, the warden told her to write a description of her conversion to Christianity, instructing her to blame Christians for fraudulently or forcibly converting her.”

Another former Muslim, who feared he would be taken back to one of the ‘Faith Purification Centres’, revealed another shocking truth behind the centre. He mentioned how the religious officers were trying to reconvert him.

“They were clearly angry and wanted to kill me but they did not harm me physically. They force you to recite the Islamic prayers and the Quran… to do all the things you’re supposed to do as a Muslim. They’re trying to force us to believe what we can’t believe.” – Former Muslim told CBN TV.

When we asked Ustaz Izhar on the cases mentioned, he denied that they happened, calling them fake news.

“In 2012, Americans made a fake clip at the first premise (Bukit Ulu Yam) which has been abandoned, with false narration. Although there were proper entrance (to the centre), they followed the Orang Asli through the jungle. The centre was operating at the second premise in Kuala Kubu Bharu when they filmed the clip.” – Ustaz Izhar.

According to Ustaz Izhar, the centre originally operated in Bukit Ulu Yam before moving to Kuala Kubu Bharu in 2010. The centre now operates next to Sungai Tua-Ulu Yam road. But, it was reported by another website dedicated for those persecuted under Islam, SMYRNA Ministries International, that patients can be kept for as short as 100 days to as long as 3 years in the centre although the provision stated differently. Ustaz Izhar denied this statement by strictly mentioning how the maximum period of detention is only 6 months.

The combination of the treatment and period of detention might be the reason as to why some patients escaped the centre.

Shaqirah, who claimed she had her rights stripped off her when they took her away, wasn’t the only one who escaped the centre. Fake news or not, the Christian lady who was taken away from her workplace also escaped the centre. It was reported that she ‘miraculously’ escaped during a rainstorm that knocked out the electrical power.

But there are other ways to leave lah. Offenders who enter the centre would have to follow the court’s order.

“If it’s one month, then they have to stay (at the centre) for one month. But adults who entered the centre can appeal to leave the centre early and it will be considered.” – Ustaz Izhar told CILISOS.

How is this all legal?

There were some cases where the centre was seen to have gone against the law. Samuri in his academic paper pointed out one case where male and young offenders who committed offences related to decency were sent to the rehabilitation centre. This goes against the provision which clearly stated that only female offenders have the option to be sent to the centre. 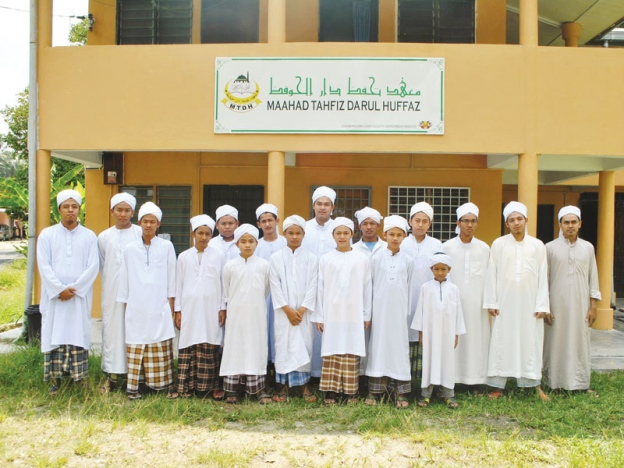 Just like tahfiz schools, parents are now sending their kids to rehab centres for rehabilitation. Image from Sinar Harian

“We would call the family members and ask them to come each month to help with their children’s rehabilitation process.”- Ustaz Izhar.

However, this goes against Child Act 2001 which states how parents must first send an application to the Child Court for institutional care under the Community Welfare Department. But this matter is questionable since there isn’t any legal provision which prevent parents from sending their children to rehabilitation centres.

When it comes to rehabilitation though, sometimes the rules are a bit more flexible, as mentioned in our report on a drug rehab centre we visited in PJ, run by ex-drug addicts. Sometimes you do need to keep people against their will. Also, much like religious rehabilitation, there are arguments that some drugs don’t need to be subject to rehabilitation.

So is religious rehabilitation all that different from drug rehabilitation? Well, perhaps it depends on which drug you’re talking about.