Malaysia and Singapore has never exactly been model BFFs like Kendall and Gigi. You see our leaders do the diplomatic handshake on TV and all, but from the time we went our separate ways, we’ve constantly poked, jabbed and trout slapped each other.

We gaduh over the crooked bridge, we gaduh over this really tiny island, what more with the recent cancellation of the high-speed rail (HSR), lagi gaduh la, gaduh some more.

Now PM Tun Dr. Mahathir wants to reopen an old wound that has been the cause of fighting between the two countries for over 90 yearrsss – the Malaysia-Singapore water deal. The deal works like this… we give Singapore 250 million gallons of raw water daily at 3 sen per 1,000 gallons, then Malaysia buys back a portion of that water, treated, at 50 sen per 1,000 gallons.

“I think it is manifestly ridiculous that we should sell water at 3 sen per thousand gallons. That was okay way back in the 1990s or 1930s. But now what can you buy with 3 sen? Nothing.” – Tun M, Channel News Asia

Historically, Johor has been an important source of H2O for Singapore. Four agreements have been signed for that purpose: 1927 (no longer in force), 1961, 1962 and 1990. Click here to read the background of all the agreements.

The 1927 agreement was voided once the 1961 one was signed. The 1961 agreement gave Singapore the right to draw ALL the water in designated areas (Gunong Pulai, Sungei Tebrau and Sungei Skudai) for 50 years until 2011. Singapore would pay 3 sen per 1,000 gallons of raw water. In return, they provided Johor with treated water daily up to 12% of the water it drew (minimum of 4 mil gallons), at 50 sen per 1,000 gallons. If the 12% was insufficient, Johor could request for more.

But the agreement in question is the 1962 one. Signed on 29 Sep, the price (as mentioned in the intro) remains the same as the 1961 agreement. The deal is valid for 99 years till 2061. In return, Johor was entitled to a daily supply of TREATED water from them up to 2% of the raw water it supplied. So here’s the math:

We earn so little from Singapore

So all these 56 years, while inflation has been going on, the price we sell them water has not gone up. We have another 43 years to go of receiving three copper coins that are no longer in circulation for every 1,000 gallons of water. Of course Malaysia rugi laaa, pfft, no wonder Mahathir called it “too costly” and “ridiculous”.

Sheesh, they’re an island. There’s water all around them. Why can’t Singapore just use that? Actually, the desalination of water requires a lot of energy because salt dissolves easily in water, forming strong chemical bonds, and those bonds are difficult to break. Energy and the technology to desalinate water are both expensive. That’s why they use raw water collected from water catchments in Johor.

That’s also the reason why Johor made the deal with Singapore to get treated water from them in return. Singapore built all the facilities to treat the water. We give them the resources, they give us the finished product. Win-win! Just smile for the camera. Img from scmp.com

Well, we dunno if there’ll be coffee involved, but Tun M said water is among the issues with Singapore that “we need to settle”. “We will sit down and talk with them, like civilized people,” he added. It’s not like they haven’t tried before. Negotiations began in 1998, if you’d like to read about it in detail, click here for The Star’s report, which covers up to the 2003.

Unfortunately, the two countries could not see eye to eye, and so the negotiations came to nothing. Both nations even resorted to placing full-page ads in regional newspapers to air their gripes.

“The advertisements (in the newspapers) is a good move to create public awareness about the issue.” – Yeo Hock Lin, 45, a contractor, The Star

Malaysia publicly released a booklet entitled: ‘Water: The Singapore-Malaysia Dispute, The Facts’ and sold it for…. 3 cents, HAHA! But everywhere, the booklet was being given out for free and it was such a hot topic. At one point, Mahathir threatened to turn off the taps when negotiations hit a rough patch during his first tenure as PM, and Singapore PM Lee Kuan Yew responded by saying he was prepared to send troops to Malaysia! 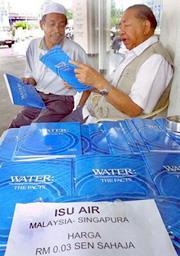 Malaysia released a water issue booklet and sold it for 3 sen HAHA! Img from The Star

But now, the Malaysian government has stated that the agreements were signed in a different era and that the price should increase.

“Malaysia’s stand changed and we propose three new prices on 7 Oct 2002, 60 sen from 2002-07, RM3 after 2007, and the agreement price should be reviewed every five years.” – plucked from the journal Pertikaian Malaysia-Singapura Dalam Isu Air

Malaysia cited the example of water sold by China to Hong Kong in the past, which was approximately US$5.80 per 1,000 imperial gallons (4,500L). However, this comparison is not directly applicable, because while Hong Kong bore the cost of constructing the infrastructure and China bore the cost of maintenance to provide water to Hong Kong, Singapore paid for ALL the costs of the reservoirs in Johor, the dams, pipelines, plant, equipment, etc., and Singapore paid all costs of operating and maintaining the infrastructure. On 31 Aug 2011, after the 1961 agreement expired, the waterworks and facilities were handed over to the Johor government (including the Skudai and Gunung Pulai water treatment plants), which were built by their Public Utilities Board and managed by them for 50 years, as well as two pump houses in Pontian and Tebrau.

What’s gonna happen to the island country after 2061?

Singapore’s like ‘puhlease Malaysia, you had the chance to review it but you didn’t’ 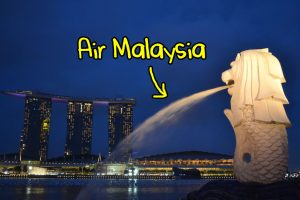 To be fair, we should kasi Singapore the chan to defend themselves. leh. Actually, both the 1961 and 1962 agreements allow a price review after 25 years, with arbitration being the agreed course of action if talks failed. However, Malaysia chose not to revise the prices at both opportunities, in 1986 and 1987.

On top of that, we mentioned that Singapore paid and built all the water infrastructure and had to pay rent for the land it used ‘at the standard rate applicable to building lots on town land’. On our side, we’re accusing them of profiteering from the cheapo 3 sen charge, but Singapore claims Malaysia’s the one that untung, coz the 50 sen we pay per 1,000 gallons is only a fraction of the true cost to Singa­pore of treating the water.

Btw, they also came up with their own lil water facts booklet to get back at us, lol. We screenshot a few of their comebacks here: Unable to tahan the drama, Singapore is aiming to be self-sufficient for their water needs by the time the agreement expires in 2061. Hence NEWater! Singapore’s toilet water to drinking water initiative.

As of 2003, about 40% of Singapore’s water came from Malaysia, but they’re well on their way there. The proportion has been decreasing as they have pursued their Four Tap Strategy of sourcing water from rainwater, recycling, desalination, and importation.

As Singapore’s water needs are anticipated to double in the next 50 years, their planned NEWater output will triple to meet 50% of needs by year 2060, whilst their desalination investment will raise output to meet 30% of needs. By 2061, the necessity for importing water by Malaysia should be eliminated. “Whether people appreciate me or not, is not relevant. Once I’m dead, they will say nasty things anyway.” – Tun M, Bloomberg