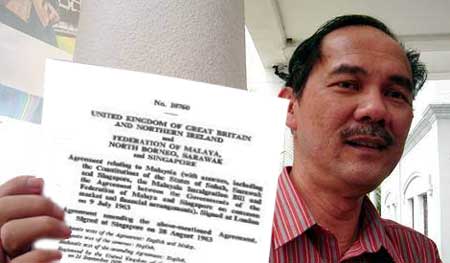 As some of you might know, the former Chief Minister of Sarawak has been mired in scandal for many years. The biggest of which, was a video from Global Witness, that allegedly shows members of Abdul Taib Mahmud’s extended family receiving payoffs in exchange for land.

With the recent shock win for Pakatan in GE14, and amidst unearthing numerous corrution scandals, many people started asking if new/old Prime Minister Tun M would finally line Taib under his sights. For now, the answer appears to be no.

“For us to take action, there must be a report by someone. Up to this moment there was a lot of talk but no proper report, so we have not taken any action just yet. But if people of Sarawak people wish us to take action, they can make a charge or complaint and we will look into it,” Dr Mahathir, The Star, 29 June 2018

Tun M is known for having a great memory, but perhaps this time, it might be a bit foggy.

Introducing Francis Paul Siah, who heads up the Movement for Change, Sarawak (or MoCS), and actually that paper he’s holding up isn’t his letter to MACC, it’s a statement encouraging Sabah to *gasp* leave Malaysia!

However, way back in 2011, he actually lodged a file at MACC against Taib, which he claimed to be two inches thick. And a few months ago, Facebook reminded him of it.

“I have to thank Facebook for their “See Your Memories” tag…. I have certainly not forgotten my former chief minister, Abdul Taib Mahmud, and the allegations of blatant and legendary abuse of power in his 33 years as Sarawak chief minister. That day, I led a Movement for Change, Sarawak (MoCS) delegation to the MACC office in Kuching to submit a two-inch thick report to the anti-corruption agency.” Francis Paul Siah, March 6 2018

On top of the complaint, he also lodged a POLICE REPORT against Taib. It’s strange how Tun Dr. Mahathir would not be aware of these, seeing as how there was even an article in The Star about the MACC opening an investigation into Taib.

In fact Sarawak PKR Rep Rolan Engan has also claimed to have lodged an MACC report against Taib earlier this year. The Bruno Manser Fond has also agreed to help the Malaysian government with any information they need to convict Taib.

Is there a line in the sand here? Taib and Mahathir before Instagram was a thing. – Image via The Star

Barely a day after being sworn in as Prime Minister earlier this year, Tun M and Taib Mahmud met, allegedly to discuss a party merger.

“It was Taib Mahmud’s friendship with Mahathir that had allowed him to freely rule Sarawak as Chief Minister from 1981 to 2014. As the former president of PBB, it is believed that he still call the shots behind the curtain. With the emergence of veterans such as Daim Zainuddin, Rafidah Aziz and Rais Yatim throwing support behind Mahathir, it’s not hard to see why Taib Mahmud could do the same.” – FinanceTwitter

During the Mahathir reign, Taib had a field day. He was free to run the state on his terms as long as they shared the loot. Taib paid millions to finance the Mahathir faction to ensure he would win in Umno party elections. For the general election, Taib gave millions to Mahathir to ensure Umno-BN’s victories. Furthermore, Taib acted as a standby personal banker to the ex-premier whenever he needed money for his sons or cronies’ business needs.

In return, Mahathir not only sanctioned Taib’s corrupt act, but would protect him and his gang of thieves from the long arm of the law. Hence, for the last 30 years till today Taib continues to plunder the state resources without interference from the federal government.” Hornbill Unleashed

With Tun M going aggressively after former Prime Minister Najib Tun Razak, 1MDB officials, Chinese construction deals and anyone everywhere suspected to be part of the corruption problem in Malaysia, many people were asking where the line would be drawn, as Tun Mahathir himself is rumoured to have his own share of skeletons in the closet.

With a campaign already launched to re-lodge complaints about Taib, it looks like it’ll be sooner rather than later that we find out.

Share this article:
NAH, BACA:
M'sia's state govts made their own contact tracing apps, so we downloaded them to try