While we were enjoying our weekends refueling our cars (cos petrol price dropped by 27 sens), we were also shocked when Sultan Muhammad V, decided to resign from his position as the Agong. Apparently, His Majesty was the first Agong to ever resign from his position. The Kelantan Menteri Besar, Ahmad Yakob, had even reportedly stated that Sultan Muhammad V wasn’t interested to be the Agong in the first place(?).

But we also found out some pretty interesting facts on how Sultan Muhammad V became the Sultan of Kelantan thanks to our friends at SOSCILI (who actually wrote a brief story about it). Apparently, a huge (royal) family drama happened that caught the attention of our nation and pretty much the world. Here’s how it all began…

This story began waaaaaaayyyyy back in 2009 (when this writer had just started her secondary school), before Sultan Muhammad V became the Sultan of Kelantan. So, whenever we mention the Sultan, we’re referring to His Majesty’s father: Sultan Ismail Petra ibni Almarhum Sultan Yahya Petra. And this Sultan has four children with his first wife, Tengku Anis Tengku Abdul Hamid. Each child has their own designation:

Now that ugaiz have a basic knowledge of this royal family, let’s begin this story. The royal family. Img from The Kelantan Times WordPress

In May 2009, the Sultan was admitted to the Hospital Universiti Sains Malaysia (HUSM) for heart problem but was later transferred to Mount Elizabeth Hospital in Singapore for a nine-months long treatment. During this period, Tengku Faris was made the acting Sultan (regent) who pretty much has similar powers and responsibility as the Sultan. And, during this period, several episodes of drama was sparked between Tengku Faris and Tengku Fakhry.

One of it was when Tengku Fakhry and his Indonesian model wife, Manohara Odelia Pinot visited the Sultan in Singapore. Manohara reportedly ran away from her husband as she claimed that she was abused by Tengku Fakhry who had treated her like an animal.

The revelation of Tengku Fakhry‘s marital problem had caused Tengku Faris to order the Kelantan palace to release a statement stating that the scandal had nothing to do with the Sultan, Kelantan Sultan’s Office and himself. This was to prevent the palace from  being involved in any potential fallout from the scandal.

As a response to Tengku Faris‘ action, Tengku Fakhry filed a defamation suit against the palace officials, stating that the claims were slanderous. However, the court threw out the case. And this was just the beginning. 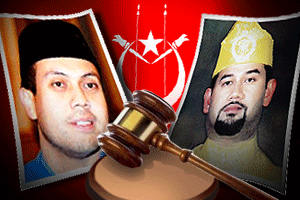 A few months after that incident, the two brothers were caught fighting again… over a Bentley car. Tengku Fakhry, who sued his brother for this, had reportedly requested for a declaration that the Bentley, which was owned by the Sultan, was his since it was bought for his use. He had also reportedly requested for a declaration that the retention of the car by his brother was invalid.

Only a few days after this court case, Tengku Fakhry had once again sued his brother. It was reported that Tengku Faris had removed him from the Council of Succession which oversees the succession of the throne.

Tengku Fakhry was reportedly seeking the court to restore him into the council. However, according to a senior federal counsel, Azizah Nawawi, the regent’s actions cannot be tried in the court.

Some of ugaiz may think that these rows happened cos the Sultan wasn’t around (y’know like when you fight with your siblings when your parents aren’t around). However, we found out that it didn’t get any better after the Sultan came back from Singapore.

Our reaction when we found out how complicated this family drama is. Gif from Tumblr

NAH, BACA:
Hugo Weaving once acted in a movie about Malaysia and it featured... Karpal Singh?!

Wan Hashim reportedly added that Tengku Abdul Aziz Tengku Hamzah was going to replace him as the regent. This raised some questions as to how the council dictates when the regent can be in power and how to measure if a ruler is truly in a good shape to rule and decide for the state.

According to Kelantan Sultan’s Office, the decision to keep the regent in power was made based on the Constitution Law of the Kelantan Government which is when the Sultan is ill and unable to perform his duties. Sultan Ismail Petra in the wheelchair. Img from The Star

As a result to his action, Wan Hashim was reportedly taken in for questioning under the Penal Code and was released two days after. However, a news source had reported that Wan Hashim went straight into a hospital.

After this incident, Tengku Faris reportedly removed Tengku Abdul Aziz who was the chairman of the Council of Succession (just like how he removed his brother from the council) and replaced him with Tengku Laksamana Kelantan Tengku Abdul Halim.

These events eventually led to the climax of the story when…

The Sultan was placed under police security for his protection

A few months after the announcement of the new regent incident, one of the Kelantan palace bodyguards, Ramli Mohamad was shot by four unidentified assailants! It was reported that Ramli died after being in a coma.

It was reported that this had led Tengku Faris to place his parents under police security for their own safety. Sultan Ismail, Tengku Anis and Tengku Fakhry were on their way to the Kota Bharu airport when they reportedly were stopped by the Special Actions Unit, a team of elite police (yea, something like the ones we’ve written before). They were reportedly on their way to Mount Elizabeth Hospital for Sultan Ismail‘s further treatment.

“We were so scared when the police hijacked our car and the Special Actions Unit tried to get the Sultan out of the car although he had insisted to return to the palace. However, the police brought him to HUSM (for further treatment) in Kubang Kerian instead.” – Tengku Anis told the Malay Mail, translated from BM from MalaysiaKini.

Apparently, there were two lawyers who represented the Sultan and Tengku Anis. They reportedly claimed that they weren’t even allowed to visit their clients and suspected that Sultan Ismail and Tengku Anis were held against their will. This may be true since Tengku Anis reportedly told the Malay Mail that they were held against their will and the police ignored the Sultan‘s orders to bring him to the palace. On top of that, Tengku Anis was reportedly not allowed to be with her husband when they reached the hospital. However, she managed to sneak into Sultan Ismail‘s ward.

This had caused a team of lawyers, headed by Raja Aziz to file a habeas corpus (err… definitely not a plant) writ to release (or rescue) the Sultan. Habeas corpus is a writ requiring a person who is under arrest to be brought before a judge or into court. So it kinda make sense when it was reported that Malaysia is the first in the world to use habeas corpus to free a ruler who isn’t even arrested!

“We take the view that the Sultan is in hospital under restraint. That’s why we are seeking his release.” – Raja Aziz told The Star.

Despite whatever Tengku Faris did, he was reportedly concerned about his father’s health la. The Kelantan gomen appointed at least 10 doctors to assess the Sultan‘s health. However, the hospital health’s campus director, Dr Mafauzy reportedly refused to comment on the Sultan‘s state of health when he was interviewed by The Star.

And, at the time of writing, we learnt that Sultan Ismail was reportedly hospitalised but… for reasons unknown. Sultan Ismail Petra in a 2016 article. img from Utusan Online

A few months after this incident, Tengku Faris became the Sultan of Kelantan. It was reported that Sultan Ismail, Tengku Anis and Tengku Fakhry weren’t present during the coronation. By now, ugaiz may think that everything is okay, right?

Well, we wish the story went like that butttttt it was reported that after Tengku Faris became the sultan and took up the name Sultan Muhammad V, he reportedly stripped Tengku Fakhry off his title (as Tengku Temenggong Kelantan).

Despite whatever he did in the past…

Sultan Muhammad V is actually loved by the rakyat

At the time of writing, we found out that most of the family drama has resolved… … well, except for when Sultan Muhammad V’s father reportedly challenged the ascension of his son to the throne. And it was reportedly rejected THREE times!

But, aside from that, we don’t see much drama from this family anymore. As a matter of fact, the rakyat seem to love him. It was reported that Sultan Muhammad V’s humble personality was what attracted the rakyat to like him. And we could see from the comments on posts related to his resignation how the rakyat commented that they would definitely miss him as the Agong.