[UPDATE: 10/01/19] This article was originally written when Nik Aziz Abdul Aziz Nik Mat passed away. But we’re re-posting this article since it is his birthday today. [END OF UPDATE]

It has to be said, a great man has left us. Nik Abdul Aziz Nik Mat, more commonly known as Nik Aziz or Tok Guru, passed away on Thursday night after a long battle with prostate cancer. It really didn’t matter if you agreed with him or not, most, if not all Malaysians, respected him as a person. For his integrity, humility, and convictions. Rest in peace, Tok Guru.

While we all know him as that one leader from PAS, how much do we actually know about him? We knew him as a great Islamic spiritual leader but a lot less about what he did that gave him such an identity. So to honour his memory, here are 5 things that you may or may not have known about Nik Aziz. 1. He was part of the ulama group that brought about a PAS revival in 1978

There was a point in time where the Pan-Malaysian Islamic Party was a part of Barisan National. This was wayyy back in 1973 when PAS decided to join the governmental coalition after the May 13th incident. During this time, the party, under the leadership of Tan Sri Asri Muda, moved towards a more nationalistic approach.

When the party did terribly at the 1978 general election, coupled with the rise of the Islamic Revival, ulamas rose up to take the leadership of the party. He and many of the young members of PAS began to question the leadership of Tan Sri Asri Muda which eventually forced the latter’s resignation. Nik Aziz during his younger days. Photo credit to sedakasejahtera.blogspot.com.

Nik Aziz, together with Yusof Rawa (who took on the mantle of PAS leader from Tan Sri Asri Muda), then led an internal transformation of PAS. This tranformation brought about a generation that valued religious knowledge and moral credibility. It was also Nik Aziz who was eventually appointed spiritual leader of PAS (different from party leader) taking over from Yusof Rawa.

2. He initially turned down the Menteri Besar post of Kelantan

Nik Aziz was synonymous with the state of Kelantan where he was Menteri Besar for 23 years, but he actually turned down the position when he was first offered it.

“When we realised we were about to win Kelantan in 1990, a few top leaders went to see him about the MB’s post. We had to press him because he didn’t want it, he only wanted to be the Speaker. He only agreed after we said that Hadi would be MB if we won in Terengganu.” – PAS secretary-general Datuk Mustafa Ali as quoted by The Star.

His tenure as Menteri Besar would see him become a central figure in Kelantan which has seen PAS not lose their stronghold on Kelantan since 1990. And as a Menteri Besar, he is said to be a scholar who would much rather use parables and metaphors to teach a lesson rather than enforce a point. 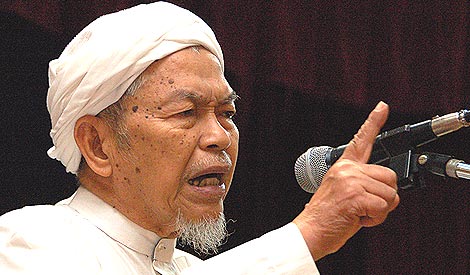 Nik Aziz was someone who would rather teach a lesson than drive home a point. Photo credit to malaysiakini.com.

He stepped down in 2013 and was replaced by Datuk Ahmad Yakub due to health reasons. In a tearful farewell, he even apologised to the people of Kelantan for the wrongdoings he had done during his time as Menteri Besar.

3. He chose NOT to live in the official Menteri Besar residence He lived such a simple lifestyle that at one point he was photographed keeping his money in a white envelope. PAS members who noticed this eventually presented him with a handmade wallet that bore the PAS logo. Nik Aziz with a white envelope for a wallet. Photo credit to eng.mynewshub.cc. And this is when he received the wallet from fellow PAS members. Photo credit to malaysia-chronicle.com.

Besides that, this story from a blog talks about how a family once bumped into him at a warung where he was eating all by himself. Photo taken from a blog, zamani84.blogspot.com.

NAH, BACA:
[UPDATED] Malaysians are now under movement control. So can go out buy roadside burger or not?

No bodyguards, no government officials, not even a mention about politics, just him enjoying a simple meal.

4. He said that the term ‘Bumiputera’ is racist

If there was something Nik Aziz wasn’t, he wasn’t someone who was afraid to speak his mind. He once said that the term Bumiputera is racist in nature and deprived other races from receiving government aid.

“In an election, other races are allowed to cast one vote, so are the bumiputera.” – Nik Aziz as quoted by malaysianbar.org.

But that’s just one of the many things he said that many would label as controversial. He once ruffled many feathers when he said a woman who does not cover her aurat deserves to be raped.

He also made statements such as smokers being worse than cows to illustrate how despicable it was in the eyes of Islam. But that’s not all, he said that the organisers of the ‘I Want to Touch a Dog’ event had worms in their heads.

If a car is damaged, a mechanic will fix it. If the body has ailments, a doctor will heal it. If people have problems in life, it is the Creator of mankind that we must refer to. It’s so strange for people to confess Allah SWT as God, but refuse to refer to Allah’s commandments when they face problems.” – Nik Aziz as quoted by The Malay Mail.

5. He also once cancelled a sponsored hajj to Mecca because… it was politicised

Personally, we at CILISOS were amazed by what he did here. In 2009, Nik Aziz admitted he was being sponsored in a RM65 thousand trip to Mecca to perform his hajj. This generated widespread media attention and the Kelantan UMNO Youth even requested that the Malaysian Anti-Corruption Commission investigate Nik Aziz’s claim. Basically, it did not look good on him.

And how did Nik Aziz respond to all this? Well to put it simply, he cancelled his trip completely. And it was even said that he cried while announcing his cancellation. He said that the attention on his sponsored pilgrimage was meant to sabotage his political career and that he only accepted the sponsorship because he was offered it. Not because he lacked the money to go on his own.

“Because the newspapers are making so much news about it, for now I will postpone my intention to go to Mecca this time.” – Nik Aziz as quoted by Malaysiakini.

He then said that he would perform the hajj the following year, with or without sponsorship  and if this blog post is to be believed, he did! Nik Aziz in Mecca. Taken from a blog, wargamarhaen.blogspot.com.

Once again we say, a great man has left us. We really just want to point out again when he apologised in tears to the people of Kelantan when he stepped down as Menteri Besar, that really just showed his heart to the people didn’t it?

A man who gave his all to his people and even apologising for not being able to give more. In our humble opinion, that is the heart of a leader.

You have our respect, Tok Guru. Rest in peace.