So recently, someone sent us a screenshot of some houseplants being sold on Facebook. Nothing unusual at first glance… until we saw the price. Wahlao weh! Almost RM3,700 for a potted plant! More than writer’s salary! Is this a scam? After digging around a little, we discovered a similarly-expensive plant on Lazada (yes, that featured image is real). At this point, we’ve entered the realm of houseplant collectors, where…

Since our experience with houseplants are limited to succulents and cacti, we’re kind of shook from all this. But when it comes to decorating your house with foliage, there are apparently more options than what’s available at IKEA. Take this plant, for example:

That’s a variant of a very rare plant called Monstera obliqua, and it’s apparently so rare that several plant collecting blogs refer to them as ‘unicorn plants‘.  One feature of plants in the Monstera genus is that many of them naturally grow holes in their leaves – they’re not chewed out by caterpillars or anything – and Monstera obliqua is an extreme example of this, often described as ‘having more holes than leaf‘.

Besides growing notoriously slow, their rarity means that they’re not sold in common nurseries. In fact, some would say that unless you bought it from a private collector for a huge sum of money (3-4 figures), it’s probably the similar-looking but more common Monstera adansonii, which you can get for like RM38 online. So obviously, some houseplants can be obscenely expensive because they’re obscenely rare, but that’s not the only factor…

White splotches on leaves can also up a plant’s value

Interested, we scrolled down on the exotic plants page further and found this plant, being sold at a whopping RM1,800:

Even if you don’t recognize the scientific name, you’re probably familiar with the leaf shape: that’s a variant the taro plant, aka keladi in Malay. From the picture, you can see how this RM1,800 plant is different from the ones commonly seen by longkangs and in swampy areas, though. It’s the white splotches.

Commonly known as variegation, this is when mutations in parts of the plant cause them to have unusual colors and patterns. Variegation happens very rarely, and due to variegated plants having less chlorophyll in their leaves, they tend to grow slowly and need more care than regular plants. It’s possible to try and propagate a variegated plant to make more, but it’s been said to be difficult to do, so they stay rare.

If the variegation is pretty enough, a plant’s value can really shoot up. For example, during the tulip craze in 16th century Europe, one of the most expensive tulips was variegated. Called the Semper Augustus, it’s a white tulip with crimson streaks running down the petals, and a single plant was said to cost as much as a nice house back then. Drawings of the Semper Augustus. Img from Daily Hampshire Gazette.

Getting back to the ad from earlier in the article, the first two plants for sale seems to be variegated Monstera deliciosa (aka Swiss cheese plants), of the albo variety. Albo here means that the leaves get variegated with larger white splotches (some develop entirely white/half-white leaves), and it’s said to be rarer and more expensive than other varieties like Thai constellations, where smaller white splotches develop, reminiscent of stars.

Variegated Monstera deliciosa became a trend among houseplant enthusiasts in recent years, with one fetching a hefty price of $5,000 (about RM20.6k!) in an online auction last year. We can drone on and on about the subject, but the moral of the story is… 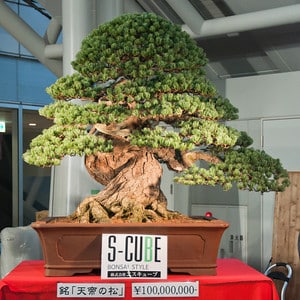 Or millions. This bonsai was offered for $1.3 million back in 2011. Img from Bonsai Tonight.

While we’ve only mentioned rarity and variegations, there are many other factors leading to a houseplant being expensive. Some bonsai trees, for example, are expensive due to the amount of time and effort spent cultivating it, and naturally a plant’s aesthetics also influence the price: they’re ornaments, after all, so pretty ones would sell for more. Considering all this, the price in the ad may not seem that ridiculous now. Besides being rare variants of trendy plants, they’re also mother plants, which means that you can potentially grow more on your own and hopefully sell them off one day.

Still, even if you now know that houseplants can be expensive, you should still be wary of people offering you ‘rare plants’ at a hefty price as an investment. With the rising trend of rare and expensive houseplants, scammers have popped up offering low quality plants or even the wrong plants, like offering Monstera obliqua and giving out Monstera adansonii, for example. Do some research, join some houseplant groups, and be sure before you give them your money.

Let us know in the comments if you guys want to read more about the world of rare and expensive houseplants, and until then, be careful around your friends’ decorative plants: they may be more expensive than you think.