Now that the Christmas season is over and Chinese New Year is almost here, you might see decorations like this in malls… …or pretty much everywhere tbh including in schools. And, just recently, a certain Twitter account called @suakeris aka Buzze Azam has uploaded a complaint letter against a school in Pusat Bandar Puchong regarding… CNY decorations!?

If you’re still in the dark about this, then allow us to enlighten you (perhaps with the lanterns) about what’s happening. Just like in any other schools, SMK Pusat Bandar Puchong 1 has been decorated with tanglungs and several other red-coloured decorations in conjunction with Chinese New Year.

However, Buzze Azam, whose real name is Mohd Khairul Azam bin Abdul Aziz, claimed that he has received complaints from Muslim parents of students from the school regarding the decorations. In the letter, he pointed out that the CNY is a religious celebration and had demanded the school to take down the decorations that, according to him, contain religious elements.

In a separate tweet, Buzze Azam claimed that the principal of the school, Rohani Mohd Noor, has sent him an email claiming that the school would take down the decorations as requested. And, oddly enough, she allegedly said that she wasn’t made aware of the decorations in her own school(??). 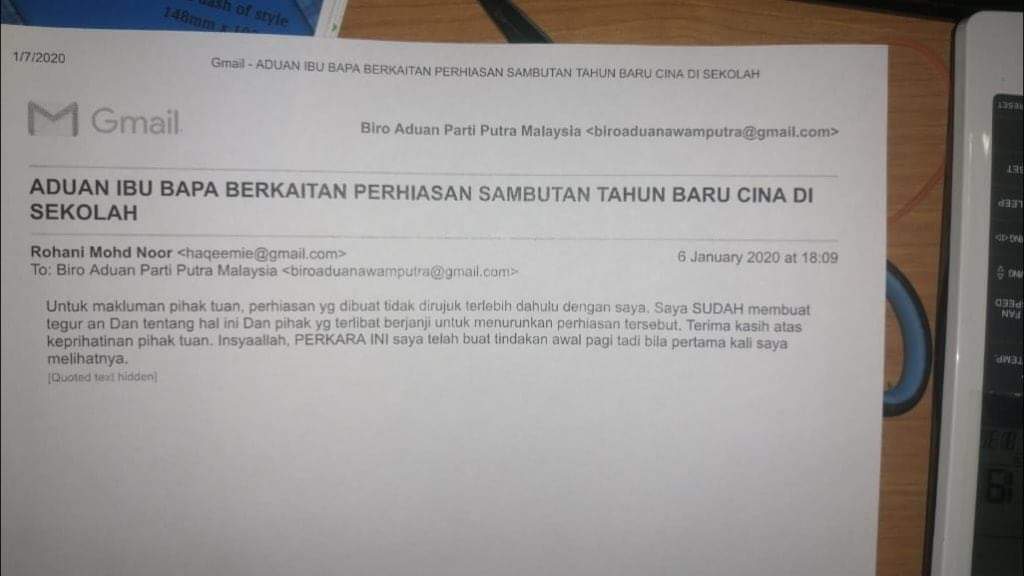 We’ll let you decide the authenticity of this email. Img from @suakeris Twitter

To add a lil bit of oddness in this case, although Buzze Azam was representing the parents of the students of SMK Pusat Bandar Puchong 1, it doesn’t seem like he was writing it on behalf of the school’s Parent’s Teacher Association. In fact, he signed the letter off as the Vice President of Parti Bumiputera Perkasa Malaysia (PUTRA).

Okay, okay, y’all might be wondering why is there a new party that is similar to UMNO. Not only does the party consist of former members of UMNO like Tan Sri Khalid and BERSATU like Datuk Hamidah Osman, 95% of PUTRA’s constitution is based on UMNO’s constitution in 1946!

Well, the main reason as to why this party was formed has something to do with how the Malay-Muslims currently view UMNO after the general elections in 2018. As you may have already known (unless you were living under a rock), the Harapan govt has taken over Putrajaya in 2018 after winning the last general elections.

And with the downfall of BN, a number of people have urged former Pasir Mas MP Datuk Ibrahim Ali, who was also the president of Perkasa, an NGO focusing on Malay rights, to find a solution to their worries, particularly regarding issues related to bumiputera. According to Ibrahim, these people are not satisfied with the current state of the country.

“A few months ago, Tan Sri Khalid and I were invited by many people, whether from certain party leaders, academicians, NGOs and youths. They expressed their concerns on what is happening in the country today.” – Ibrahim to Malaysiakini. Translated from BM.

And because of this, Ibrahim decided to form PUTRA, a party specially made for Malay-Muslims and bumiputera in August 2018. However, the Registration of Society (RoS) didn’t approve the application right away. It took them 7 months to approve PUTRA’s application. Buzze Azam (third from left) and Ibrahim Ali (fourth from left) with the party’s logo. Img from Malay Mail

Ibrahim had sought the help of Buzze Azam, who had later joined the party, to represent the party for a judicial review as RoS was taking some time to approve their application. If the name Buzze Azam rings a bell, that’s because we’ve written an article about the independent candidate in GE14. He’s also a lawyer, who had represented several famous people like Dr Zakir Naik.

“I am very excited by this decision, after 7 months of waiting and having to file a judicial review to obtain a court order against RoS. The court hearing was supposed to be held today (9th May 2019) but the RoS contacted us saying that the application was approved.” – Ibrahim to Awani. Translated from BM.

Now, PUTRA is a full functional political party like UMNO or even PAS. Those people who have met Ibrahim might’ve felt like this when PUTRA was formed.

So… why would anyone be bothered to join or even vote for a party that’s so similar to UMNO!?

Yeap, you read that right. When PUTRA was formed, Ibrahim Ali meant nothing but business. And by business, we mean winning the next general elections, particularly in states like Selangor and Perak. Some of you may be aware that these two states are currently governed by Pakatan Harapan.

“Selangor is the focus as the state has been governed by the Pakatan Harapan (PH) or previously known as Pakatan Rakyat (PR) and most of its people want a new government.” – Ibrahim told Berita Harian. Translated from BM.

He also added that because UMNO has failed to take the state back since 2008, he thought it would be PUTRA’s time to take back the state and fulfill the rakyat’s supposed demands. And they’re planning to take Harapan by surprise.

Err… maybe without the confetti. Gif from Giphy

The Muslims in Perak, on the other hand, had told Ibrahim that they are starting to lose faith in Harapan and UMNO. They are apparently looking for an alternative party and Ibrahim believes that PUTRA is exactly what they’re looking for.

Ibrahim also added that they would be working hard to win in other states too like Terengganu, Kelantan, Pahang and Johor as they believe that it is possible for them to win in those states. And, as if that doesn’t sound ambitious enough, they’re planning to do this without joining any coalition.

“We will not join any coalition but we might be open to form an electoral pact.” – Ibrahim to The Star.

Ibrahim also noted that they’re not trying to divide the votes among the Muslims but PUTRA believes that their target voters would be those who had lost faith in UMNO and Harapan or fence-sitters.

They’re also recruiting non-Bumiputeras! But only as associate members.

As it turns out, PUTRA will also recruit non-Bumiputera Muslims who wish to join the party. However, they won’t be able to hold any specific positions in the party or get voting rights.

“So Clause 512 says membership is open to all non-Malay, non-Bumiputera Malaysians who are Muslims, aged 18 years and above as associate members.” – Ibrahim to Malay Mail.

If this sounds somewhat familiar to you, well, that’s because PAS has similar practices with its non-Muslim members too. We’ve written about a Chinese PAS candidate in the previous general elections and you can read more here. And together with all these members, PUTRA aims to champion the bumiputera and Muslim rights.

“Matters related to religion, rights and education are being trampled upon, so we cannot keep quiet and just be onlookers.” – Ibrahim to The Star.

This may be why the party decided to lodge a complaint against SMK Pusat Bandar Puchong 1 regarding the CNY decorations… although CNY isn’t a religious celebration. At the time of writing, Buzze Azam claimed that he has already won. What exactly did he win? Well, according to him…

“My one letter caused the tanglong (Chinese lantern) to come down, seven ministers had to go (to the school) to raise it back up. I have won.” – Buzze Azam to Malaysiakini. As it turns out, the school had temporarily taken down the decorations but it was only following the advice from the police to de-escalate the situation. He also added that his name was being mentioned 15 times in the cabinet but a minister aide who wishes to be anonymous told Malay Mail that Buzze Azam’s claim isn’t true.

Despite the whole controversy, it seems like PUTRA isn’t really a bad party with some pretty valid core values that they’re fighting for. But let’s just hope the next time PUTRA brings up an issue, it would be a more concerning ones like corruption since they wanna uphold integrity and combat corruption anyways.

Share this article:
NAH, BACA:
In 1994, Bank Negara lost RM1.5k for every M'sian citizen. Why gomen only investigate now?