[Our Soscili gang wrote this article in BM. Read here.]

You might have heard of the 11 Uighur Muslims who were released from detention in our country recently. Our local authorities jailed them for coming to Malaysia illegally after executing an epic action movie-styled escape from a prison in Thailand. And yeah, they were earlier jailed in Thailand for the same reason (illegally coming to Thailand from China).

These jailbreakers are just a few from the Uighur population who escaped from China because of the alleged persecution China has been giving them. Why are the Uighurs suffering such discrimination? Yes, a recent CILISOS article has briefly covered the background but here’s a more detailed one.

Basically, the Uighurs, who are mostly Muslim and speak in Uighur (a Turkic language), live in Xinjiang (north-west China), which borders Pakistan, Afghanistan, Kyrgyzstan, Kazakhstan, Russia and Mongolia. Xinjiang, which later became part of China, used to be part of the ‘Silk Road’. But then in 1944, people in Xinjiang re-declared independence, this time with Soviet Union’s help, and created the Second East Turkistan Republic. But shortly after, in 1949 the Communist Party of China (CPC a.k.a. CCP for Chinese Communist Party) allegedly took over Xinjiang and declared it a Chinese territory. Subsequently, Xinjiang became classified as an “autonomous region” in China. Mao Zedong (Chairman of the CPC) declared the formation of the People’s Republic of China in 1949. Image from thatsmags.com

What attracted China to Xinjiang was probably the fact that the region was rich in mineral and oil products. China was also trying to advance the region’s economy in its “Open Up The West” and “Go West” campaigns by setting up a special economic zone, subsidizing local cotton farmers, overhauling its tax system and increasing employment opportunities (becos of the projects).

Then, the Han Chinese peeps migrated to Xinjiang because they wanted to work there. Reports claimed that the Han population in Xinjiang skyrocketed from 220,000 people in 1949 to 8.4 million in 2008. Thanks to the HUUUUUGGEE number of people in Xinjiang, problems arose becos land and water too little lah.

Tensions between the Han and Uighur communities also started to occur since alleged discriminatory hiring practices created a wealth gap between the two ethnic groups. Uighurs are also upset with what they consider as China’s alleged efforts to ‘renew their cultural and religious identity’ through ‘re-education camps’ that allegedly look more like concentration camps.

This problem came to light in July 2009 following riots between the two groups and the authorities in Urumqi (Xinjiang’s capital). Riots are reported to have been triggered by the alleged ethnically motivated killing of two Uighur workers in Guangdong.

Riots in Urumqi. Image from uyghuramerican.org

Xinjiang is also linked to terrorism because of alleged attempts to separate Xinjiang from China. Among them is the East Turkestan Islamic Movement (ETIM) which is allegedly labeled as a terrorist movement by China, the USA and the UN Security Council. China also allegedly claimed that the group had links to al-Qaeda and trained in Pakistani jihad camps.

So the Chinese govt has allegedly tried to combat separatists/terrorists and monitor religious activities in Xinjiang. But there are still many experts who think the Chinese are just exaggerating the threat of Uighurs. Some also argue that China’s “anti-separatist” campaign is actually more hateful and causes even more violence.

Not too long ago, the media reported that the Chinese govt rampas the Quran and prayer mats from the Uighurs, which the govt allegedly denied. The govt also allegedly banned Uighur Muslims from fasting, entering the mosque and doing any religious activities during Ramadhan. There are allegations of govt-serving Uighur men who have to shave their beards and women who can’t wear hijabs!

Actually, there is another ethnic group following Islam and they’re the Huis. But do the Huis face the same problem the Uighurs do?

Apparently not, coz the Chinese govt is not scared of the Huis

In fact, the Huis are actually treated well by the Chinese govt.

“Of course I am fasting during Ramadan. All my Hui friends do it too. It’s our obligation as Muslims. “- Ismail, a Muslim Hui, told Time.

So if it’s not the religion behind the alleged double standards, then what is it? There have been theories behind this, among them being cultural and language factors. The Huis speak Mandarin, while the Uighurs speak Turkish, so you can imagine how much easier it is for the govt to communicate with the Huis.

Plus, the Huis are also said to have assimilated with the Hans. One exhibit of this assimilation is the design of their mosques that mixes Islamic art with the traditional Chinese dynasty art. Prof Dru Gladney of Pomona College, California, claims that the number of Muslims in the Hui community is increasing.

“For example, there is a dramatic increase in the number of Hui women wearing the Hijab. the numbers of Hui going on the Haj are going up constantly.”- Gladney told Deutsche Welle (DW). 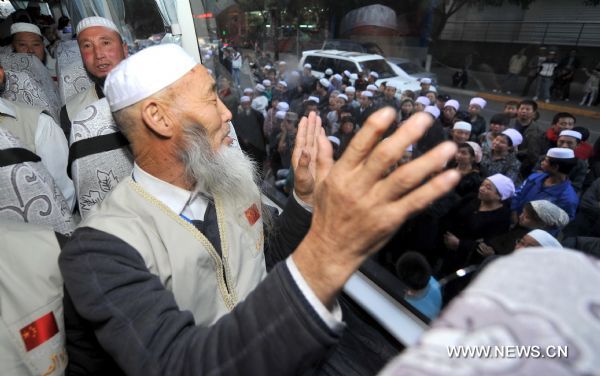 Among those on the way to the airport to fly to Mecca. Image from news.cn

Besides these factors, one thing that cannot be avoided is the political factor. SOSCILI got in touch with geostrategist Azmi Hassan who said that the ruling party CPC is so sensitive to large groups regardless of religion or culture because they allegedly think it can curb the influence of CPC. Many of the ethno-religious groups want to free Xinjiang from China, posing a threat to the CPC. On the other hand, the Huis have so far not challenged CPC.

“It is true that Muslim Huis are not subjected to discrimination like the Uighurs are, because Hui is a minor Muslim and is considered incapable of threatening the existence of the CPC.” – Azmi Hassan told SOSCILI.

That’s why the Huis are allowed to live freely, even as practicing Muslims. But as for the discriminated, Uighur Muslims are not alone in this suffering.

NAH, BACA:
Did someone pay Cent-GPS to do the racist recruitment study? We asked them

Turns out followers of other religions are allegedly discriminated too

And these religions are Christianity, Tibetan Buddhism and Falun Gong. The massive media coverage of China’s alleged discrimination against Muslims may have clouded what these followers face.

In 1966, all religious groups were allegedly banned by Mao Zedong (CPC Chairman), including Christianity. But in 1979, religion allegedly became unbanned with some control by the govt, through the Three-Self Patriotic Movement (TSPM) and the Chinese Christian Council (CCC).

So Christians were allowed to practice but only to a certain extent. The problem is that some peeps claim that the government is trying to expand their own version of Christianity, the “Chinese Christian theology“, allegedly just to make the religion compatible with China’s communist ideals. Thus, many Christians there joined the ‘underground churches‘, which are illegal and hence, not bound to the govt. 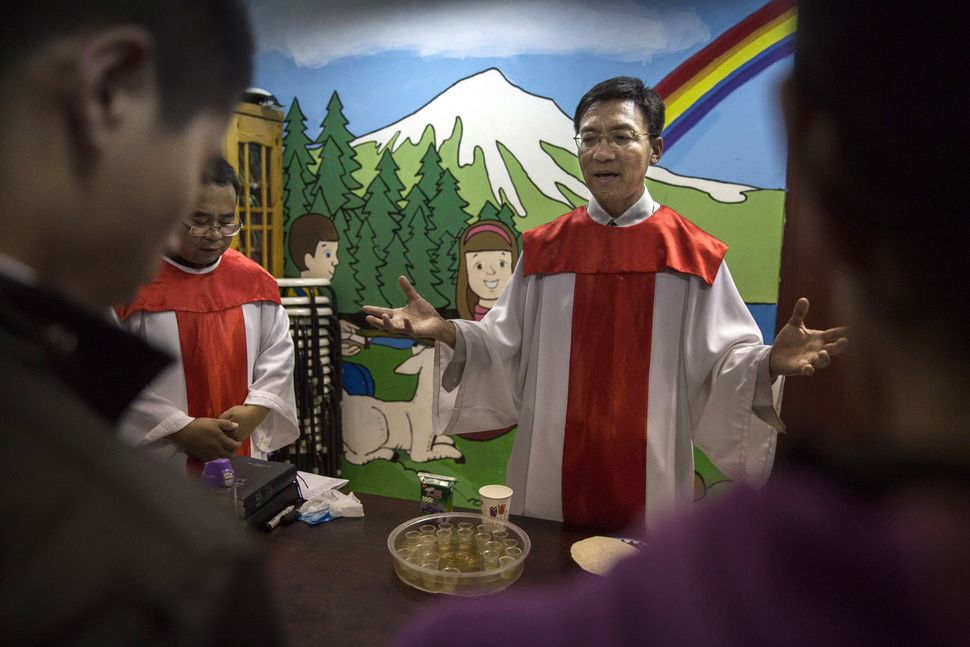 A baptismal event in an underground church in Beijing. Image from huffingtonpost.com

They also claim that Christian preachers are allegedly pressured to show their loyalty to CPC. So they were allegedly told to deliver govt propaganda in their sermons.

What about Tibetan Buddhism? The Dalai Lama‘s attempt to free Tibet from China has undoubtedly been a threat to the Chinese govt. Most of the monks and nuns there have been defending their language, culture and education, so they’re allegedly targeted by the Chinese authorities.

The authorities have also reportedly destroyed monasteries at Larung Gar, one of the largest Buddhist learning centres in Tibet, leading the Human Rights Watch (HRW) to calling on the authorities to quit the expulsion and demolition. But according to Chinese official statements, they never intended to destroy Larung Gar, but actually planned to renovate the small town to be cleaner, organized, safe, and cantik.

View of Larung Gar and its monasteries. Image from placeaholic.com

Falun Gong, said to be similar to Buddhism, was founded by Li Hongzhi who’s been living in the USA since 1996. Falun Gong’s teaching is unique because it does not have a hierarchical structure, an administrator or an official and a special place of worship. Still, there is no clear reason why this teaching is allegedly opposed by the government.

The CPC had previously said that Falun Gong is “a menace to society“. Some say the CPC may allegedly be jealous and afraid of the influence of Falun Gong. Till now, various actions have allegedly been taken against the followers including jailing them. A Falun Gong practitioner being arrested. Image from fofg.org

All these allegations may seem like CPC is the bad guy.

But wait… let’s consider CPC’s side of the story

According to the Council of Foreign Relations, the CPC is officially atheist, so the CPC members are not allowed to have any religious beliefs, which obviously don’t go hand in hand with atheism.

In connection to the Uighur issue, the CPC-led govt allegedly believes that religion is the cause of socio-political problems, particularly religious extremism and terrorism (like we mentioned earlier). BBC reported that the govt claims that some Uighurs have been radicalised by jihadist videos allegedly from Pakistan and Afghanistan which are accessed via the Internet. 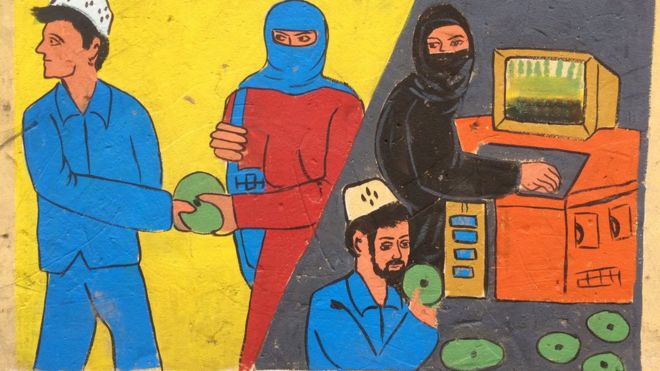 An alleged illustration of digital radicalisation. Image from BBC.

Hu Lianhe, a senior CPC official, told Reuters that China had handled extremist-related crimes like assassinations, arson and poisonings according to the law and did not seek to “de-Islamise” Xinjiang.

“Those deceived by religious extremism … shall be assisted by resettlement and education.” – Hu said.

Hu added that China imprisoned people for major crimes but did not imprison for minor crimes. Those who committed minor crimes were given education and training, rather than ill-treatment.

So because of the Chinese govt’s alleged attempts at eradicating extremist harm to ensure harmony in the country, these attempts may have also taken a toll on the living of the Uighur men who…

Even went to the extent of fleeing to Malaysia?!

Reports have claimed that Malaysia Lama did consider sending the Uighurs back to China and has even sent some to China before. But once Malaysia became Baru, there’s been a twist of fate for these guys and it was a good one.

Much to China’s dismay, instead of handing them over to China as Malaysia was supposed to, Malaysia sent the men to Turkey. The Uighurs’ lawyer said that our prosecutors dropped charges against the Uighurs for humanitarian reasons.

“They have done nothing wrong in this country, so they were released.” – Dr M justified.

But there could be an underlying reason for Malaysia’s decision to set them free and not just plain old humanitarian fluff fluff. What is it then? Another CILISOS article explains, which you can read about here.