We’re gonna skip the usual long winded introduction and cut straight to the chase here: This is a plea for donations to keep Meowseum running – with a target of RM36,000 for them to survive another 6 months.

If you love cats, art, or want a place to visit in Penang that doesn’t involve food, then here are the details:

If you need a little more convincing, then read on.

Meowseum is also home to its owner and his 4 cats Shin couldn’t get the miaomiaos to stay still for a group photo, so we made a collage.

Among a very small handful of museums dedicated to displaying cat-related art in the world, two can be found in Malaysia – Meowseum in Penang, and The Cat Museum in Kuching (of course). Aside from making Meowseum the only cat art museum in Semenanjung, it’s also the heartfelt labor of love by one man and his four cats trying to bring joy and inspiration to Malaysians through art.

Shin (the hooman) lives with Yoko, Boo, Chubby, and Maru (the cattos) in the 100-year old building in Lebuh Melayu, Georgetown which currently houses everything from super atas cat paintings by Picasso and Dali, to Hello Kitty and Doraemon collectibles. Shin tells us that he had been sourcing and researching the items in his collection for the past 10 years. This Indonesian wooden cat puppet is the rarest item in Shin’s collection, which he says is impossible to find. He bought this retired piece from a Wayang Golek master.

However, despite what you might think, Shin wasn’t always a cat-lover. He grew up a dog-lover. It wasn’t until 15 years ago when he met two cats in need of help, that he shifted to feline fandom:

“An adoption of a beautiful stray cat that was in a very bad state and needed immediate surgery changed my mind. She was a classy one and a breeze to take care of.

[The second] adoption was for the most intuitive and loving cat I’ve ever encountered that had only one kidney, and won my heart totally. These two have since passed on from different health issues.” – Shin, to CILISOS

As he went through some really tough times with his job and marriage, his cats were a constant source of comfort. But when his marriage ended and he was at his breaking point at work, a pair of ceramic cats that he bought on a whim mewed a small glimmer of hope.

“They seemed to speak to me and tell me that things were going to be okay. Then 2 became 4, 4 became 10, and eventually I had a collection that was even too big for my house.”

Wanting to share his collection with others and – as he put it – feed the heart, mind, and soul more than the stomach; he found a shophouse that would become both his and his cats’ business and home.

But the past year hadn’t been great for Shin and his cats.

To survive, Shin even has to put his cats through rationing 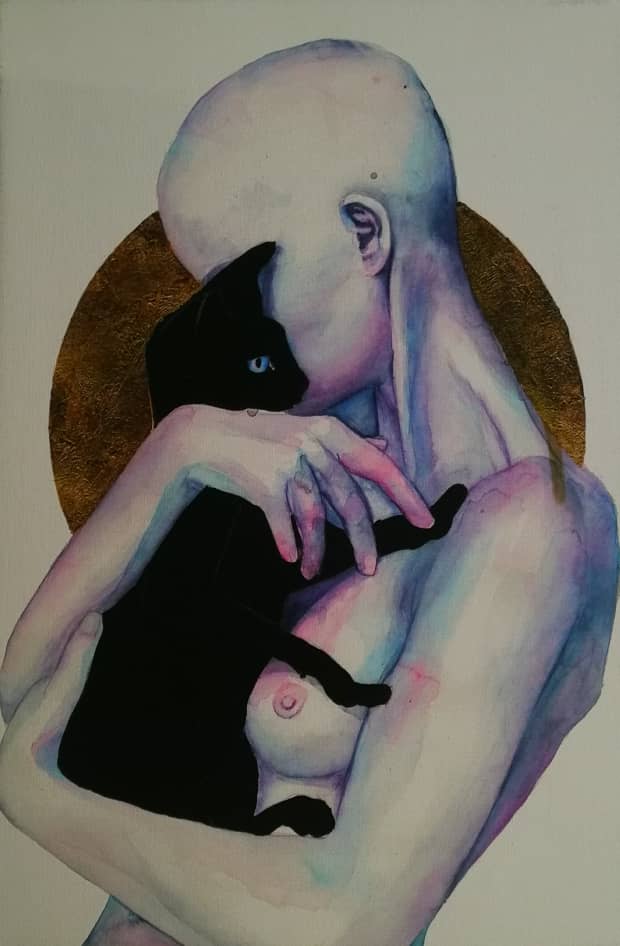 One of Shin’s favorite pieces

“The museum itself took 8 months to put together with my own bare hands. And I’ve got injuries and scars to show from this journey. I even survived a 12 feet fall from a ladder trying to hang a heavy art piece that was 4 feet wide. Till today I’m reminded of that fall injury whenever it rains.” – Shin, to CILISOS

Unfortunately, his tears weren’t of joy at seeing his work come to fruition; but tears of frustration from the prolonged lockdown. The strangest piece in his collection, a collage work from Lola Dupre, a French-Algerian artist

Having put his life savings into Meowseum, Shin was at first overjoyed at the positive reception he got from the moment it opened its doors in September 2020. And that initial elation came crashing down when the next round of MCOs, CMCOs and lockdowns skittled in like a cat on a hot tin roof.

“[There was] lots of crying I guess. Tears of frustration and exasperation. I think I looked up at the sky and said “Really??!!” when it was announced.”

At first he held hope that it would end as planned, but it stretched to the third month. And then the fourth. And by the fifth, he’d given up on hoping. He started rationing – cheaper everything, instant noodles for himself, electricity only when necessary. And this extended to his furry “business partners” as well.

“My cats, being creatures of habit certainly were not too pleased with the downgraded quality of their food. But I’ve got to do what I’ve got to do.”

But even after all that, with no indication on when he can reopen or when interstate travel will be allowed again, his reserve funds dried up.

… whether it’s because you want to support one man’s dream,

“[Meowseum is] my tiny contribution to the world while I’m still alive. I thought I could make art more accessible to the masses by using something most people can relate to – the household cat”

…or to ensure that 4 kitties continue to have a home. At the very least, do it for the cats.