And we thought it’s time to update this article. But chill guys, this was written like a seriously long time ago in 2014, when CILISOS was in it’s infancy.

This Mother Nature, right, she lately buat hal and sent ‘tornadoes’ to do some damage in Pendang, Pandamaran, Penang (although this is debatable since Meterological Department officials denied it) and Kota Kinabalu. And they all happened in 1 month! We’re sure you guys know about these cases already and they are spreading like wildfire on social media. People have been sharing a lot of pictures and videos.

How bad are our ‘tornado’ cases? Are ‘tornadoes’ becoming more frequent? Is Malaysia becoming the next Tornado Alley? Should we get ready for Armageddon? And why the heck is this CILISOS writer abusing ‘quote’ ‘marks’ with a vengeance? We speak to Saw Bun Liong, Director of Commercial and Corporate Services from the Malaysian Meteorological Department to find out.

But first, a Pendang production.

Is Malaysian weather freaking out on us?

In the month of October alone, we’ve had 4 ‘tornadoes’! So are we getting them more frequently now or something? Is our weather going psycho? Even our editor’s roof was ripped right off during a storm last year!

“Waterspouts mostly occur during the inter-monsoon season – April and October, those periods. The transition between Southwest monsoon and Northeast monsoon are when thunderstorms are the most severe. October is generally a hot month. And the thunderstorms usually happen in the evenings, after 2pm.” – Saw Bun Liong

We would love to get our hands on a timeline of ‘tornadoes’ in Malaysia to look at their frequency, but sadly, Bun Liong from the Met Dept (www.met.gov.my) told CILISOS that no records exist. Sorry, guys! He expressed that the reason why we even have evidence now is because camera phones enable us to document and share such events with other Malaysians.

However, YES, we are going through ‘climate change madness‘. The term was popularised by the media based on Yeb Sano’s speech at the United Nations Climate Talks. Climate change in Malaysia would mean heavier rainfalls, rising sea levels and possibly extreme weather. 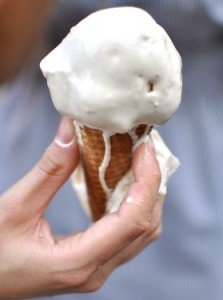 We’re just gonna have to eat our ice cream twice as fast. Image from Jon on Flickr.

“There is definitely a change in our climate, especially in a long-term comparison. If you compare the last 10 years, temperatures have gone up. When temperatures go up, updrafts increase and this causes thunderstorms to become more severe.” – Bun Liong

Let’s look at some figures from the past. Our temperatures are certainly depict an upward trend. Image from Climate Prediction and Information for Decision Making in Malaysia. Click for more.

Wow, so based on this chart we can see that Kuching and Kuantan relatively have lower temperatures compared to more urbanised areas!

The same report shows that Malaysia’s rising temperatures are in line with the rise global temperatures as well. Temperatures have gone up roughly 0.85ºC from 1880 to 2012. What does this mean? Each degree in temperature change can cause sea levels to go up between 1-3m. From this study in the US, it seems buying property in Miami Beach or Atlantic City might not be such a good idea.

So are Malaysian tornadoes naughty or nice?

Now we’ll tell you why we put the word ‘tornado’ in quote marks.

“‘TORNADO’ is such a big word. Here in Malaysia the cases are usually smaller. They are waterspouts or landspouts.” – Bun Liong

His simple explanation shows us that what Malaysia has been experiencing so far are weaker, baby versions of a tornado. And they are sure as heck not formed when the Taz the Tasmanian Devil starts whirling. 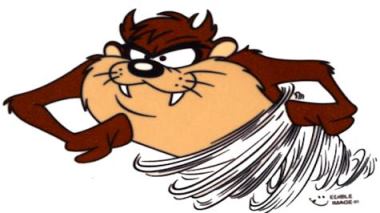 This is NOT how a tornado starts. Image from Rant Lifestyle.

As for the frequency of spouts in Malaysia, Bun Liong informed us that although we’ve been seeing them, especially this October, they don’t happen very often.

Even though there isn’t an official record, here are some of the past events we dug up.

This is a video of the one in Johor Bahru.

What about that F– thing? Whatchamacallit – the Fujita Scale? Well, Bun Liong allayed our fears:

“What we’ve seen here are usually low on the Fujita Scale – an F0. At most, the Pendang waterspout could be an F1. It usually doesn’t go above that in Malaysia.” – Bun Liong

Fujita Scale. Click it to go on a wondrous journey of tornado education.

In Malaysia, spouts are categorised based on the extent of damage. The Met Dept has over 400 stations in Malaysia and only less half of them have wind shear measuring equipment installed. “Unless we have the stations nearby, then we can detect the wind speed,” he said.

We evaluated the damage of these 4 October cases and see where they fall on the scale. Bearing in mind, measuring it based on damage is subjective.

Pendang | Tore off the roofs off about 8 houses and uprooted trees, lamp posts and electricity cables. It looks like this could have been an F1, according to Bun Liong.

“Yes, we saw the roof come off in Klang, but also depends on what kind of roof also, la.” – Bun Liong

OK, OK, everyone, Pandamaran – a Klang place – they weren’t the sturdy, brick-house type roofs. Picture below. Example of the damage done by the spout in Pandamaran. Image from Astro Awani.

Penang | No damages were reported. In fact, Meterological Department officials said there was no incident reported, so this may not exactly have been a full-formed, proper waterspout. F0.

Kota Kinabalu | No damaged reported as well and it dissipated within a few minutes. We guess it’s an F0 again.

Nope, no cows or sharks were sucked up into the air in any of our cases.

Since the spouts are nothing like the kill-everything-in-sight, stuff-of-nightmares tornado in the movie,  Twister, they are not naughty. Whew! Honestly when we compare ours with other tornadoes within the Asian region, tau lah. Even Singapore… SINGAPORE, kena tornado. Eh, wait this one? Aiyo, please that’s the same feller as the Johor tornado. Cis, these guys. Even tornado also wanna claim theirs! :p

Let’s see, what else did Bun Liong tell us. Oh yeah, that the spouts are not geographically-inclined… other than, waterspout = occurs over water and landspout = occurs over land. But there’s no one particular state, or city that is considered a target area in Malaysia.

Can we run for cover?

Of course you can! Even though ‘tornadoes’ are not regular in Malaysia, but in the event that you see one, do this. Bun Liong gives us sound advice. If you see a spout, STAY INDOORS! We seriously hope you don’t try to pick up the new hobby of storm-chasing.

“If hailstones start falling, it’s usually a sign that a spout is about to happen, so you should stay indoors. This is also to protect yourself from lightning too,” – Bun Liong.

OK that’s one way of protecting ourselves. The other is this – it would be a good idea if people would just give the climate a break. Then maybe she wouldn’t PMS so often on our parade. Malaysia racks up some pretty awful numbers in GHG emissions. According to our report to the United Nations Framework Convention on Climate Change, carbon dioxide (CO2) emissions amount to about 75% of our total emissions and 66% of Malaysia’s GHG emissions come from the Energy sector.

So there’s clearly something that needs to be done. But what can every one of us do to help the environment? Maybe you can start with our handy guide on How KL-Lites Can Be Less Sampah?

Cos if we don’t all chip in now, we’re gonna be seeing sea levels rise by up to 12m in the next century. Doesn’t sound like much right?