The owners of Permaculture Perak, Vladislav and Amy, recently met the CEO of the Perak State Development Corporation (PKNP) and the State Tourism, Arts and Culture Committee chairman Tan Kar Hing. In that meeting, they were allowed to reapply for the land again to continue their project under a new contract.

Vladislav and Amy have submitted the applications required and are now waiting for the state govt’s for their response.

You may have seen ang mohs living off the grid in the jungles through documentaries. Well, guess what? We have people like that in Malaysia too.

Meet Vladislav Kuta and, his wife, Amy Tan. Both of them have been living off the grid since 2008 in Lenggong, Perak. They’ve even opened up an off-grid jungle farmstay there for visitors who want to escape the busy city life. It’s called Permaculture Perak. Vladislav (left) and Amy with their child. Img from Malay Mail via Farhan Najib

However, just recently, the Perak State Development Corporation (PKNP) had asked Vladislav and Amy to leave the land. Yes, that would mean that Permaculture Perak would be closed.

We’ve gotten in touch with Amy to find out more about what’s happening. The first thing we found out is that…

The land was originally a famous tea plantation in Perak

Err, no. It’s does NOT belong to BOH.

According to Amy, back in the early 90s, the land where the farmstay is located at now used to be a tea plantation for a tea product called Teh Lenggong. The tea plantation was apparently a joint venture between an English company, Tate & Lyle and the state govt.

Amy said that this is apparently the only tea from Malaysia that was sold in Harrods London so it was a pretty exquisite tea.

“According to Lenggong locals who used to work there, it was a beautifully managed tea plantation. They hired local kampung ladies to pick leaves by driving them up the hill daily.” – Amy told CILISOS.

But Amy told us that the tea company had only lasted for about 12 years. Coincidentally, around that time, the company Vladislav was working for called Knowledge Value Consultancy Sdn Bhd, found a land that was abandoned for more than 10 years and it was eventually leased to the company.

Vladislav, who was still single at that time, then decided to live off-grid and eventually open up the farm. Amy, who was a former Pilates instructor, had met Vladislav during her visit at the farm. She told us she was attracted to the lifestyle and, well, the rest was history.

Since Permaculture Perak promotes an individual sustainable lifestyle, Vladislav and Amy had grown crops like soursop, bred livestock like chickens and cows besides using solar panel that supplies about 2kW of electricity to the home and farm. One of the biggest highlights of the farmstay experience, according to Amy, is the… meals like the homemade bread for breakfast and fresh plucked ulam from the garden!

Visitors to the farm pay RM164 to RM225 and would have to expect a simple lifestyle. But Amy reportedly said that the farm serves a bigger purpose than just that.

“We have hosted thousands of local and international tourists in our farm. We also have a group of students coming in almost every month, where they will get hands-on experience on how to set up a garden, water and solar system and also learn how to plant trees and herbal crops in a sustainable way.” – Amy to Malay Mail. And this apprenticeship cost RM900 per week.

What’s even more interesting, the farm has been featured in a National Geographic series called ‘Living Free with Kimi Werner’ (it’s season 1, episode 2, if ugaiz are wondering). The farm has also promoted tourism in the state because the area is a haven for wildlife like gibbons and even hornbills.

Oh, and just in case you don’t know, Lenggong is a UNESCO Heritage site for Archaeological importance like the Perak Man. Amy told us that they’d bring visitors to explore the archaeological caves besides going for river cruise on Sungai Perak, among other things.

Okay, so if the cause seems good and many people have visited the farm, then what is the issue exactly?? Apparently…

Perak govt accused the farm owners of not paying rent but…

As it turns out, this isn’t the first time the couple was told to evict the land by the state govt. Back in 2011, PKNP has issued the first eviction notice to Vladislav and Amy because they did not pay rent.

Amy explained that the reason they stopped paying rent at that time was because there were squatters who had trespassed their land.

“Our eviction notice was first served in 2011 based on non-payment of rent. This was also the same time after the landlord rented the neighbouring plot to a timber company for monoculture plantation.” – Amy told Malay Mail.

We’ll explain more about the timber company later. Anyway, Amy claimed that they have informed the landlord of the squatter issue but no action was taken by the authorities. This was why they refused to pay rent. Police visited the farm in 2012. Img from Save the Avatar Tree’s Facebook

But after they received the eviction notice, they resumed all rental payments. And by all, we mean ALL of the rental payments, including the times they had refused paying rent.

Okay lor? End of story right cos they paid rent?? Well, not really.

Oddly enough, PKNP had returned ALL their rental payments without even giving them any reasons! And, according to Amy, this went on til 2015.

“No, PKNP has never explained why they are returning the rent. They insist the rent hasn’t been paid before and refuse to allow even a meeting to let ourselves be heard.” – Amy told us.

Around the same time this was happening, PKNP had taken matters to the court. However, Amy told us that they couldn’t defend themselves in court because they weren’t even given the court summons to appear in court. That was then apparently used by PKNP to get a judgement in default against Vladislav and Amy.

“We filed an application to set aside the case so it can be reopened and succeeded. They then appealed to the High Court to stay the original judgment in default.” – Amy.

In the end, the High Court judge told both parties to settle out of court. This was when PKNP had reduced 5 years from their original lease agreement. Vladislav and Amy had no choice but to agree that they would have to leave the land by 31st July 2018 because it’ll give them another 1.5 years to reapply for the land.

With the change of the govt after the General Election last year, Amy said they reapplied to purchase the land or lease the land for a longer term (about 30 years or more) but there was never a reply. Apparently, they planned to set up a sustainable living education center to cater to a larger group including students. This initiative is a collaboration with a biodiversity research center, which is listed on ASEAN University Network’s Ecological Education and Culture Initiative.

We tried getting in touch with PKNP to find out more about the Amy’s application but we’re still waiting for a reply from them. :\

Earlier we mentioned that a timber company for a eucalyptus plantation had occupied the land next to Permaculture Perak since 2011, around the same time Vladislav and Amy were given their first eviction notice. PKNP reportedly approved 80.93 hectares of land to the company producing plywood.

And by 2012, all that’s left of the land that used to be a tea plantation, according to a visit by PAS Perak members, is this… The land has been cleared Img from Harakah Daily “According to our research, this (eucalyptus) tree is banned in a few countries like Brazil, Australia and India.” – PAS Perak Deputy Commissioner, Razman Zakaria to Harakah Daily, 23/02/12.

It is reported that the eucalyptus tree, which is not native to those countries mentioned by Razman (and our country too), can damage water source in these countries. But some forest conservators, especially the ones in India, believe that the eucalyptus plant is a good buffer in forest fringes and help curtail encroachments because it can easily adapt to new environment.

Razman’s concern tho is more to do with the activities of the company as the eucalyptus plantation had caused floods in the kampungs nearby. The kampung people aren’t the only ones affected. Amy told us that their land has been affected by the plantation as well.

“We lost about RM100,000 due to the illegal clearance by the company. We have made reports to the landlord, but again it has fallen on deaf ears.” – Amy to Malay Mail. In the article Vladislav wrote in 2012, he mentioned that PKNP had said, “It is not our job, it is the job of the journalist and press. We are just visiting,” when it was visiting the eucalyptus plantation then.

Amy added that she suspected PKNP might be pressured to evict Vladislav and Amy because they’re in the way. The farm is apparently located in between the logging area and the timber factory.

She also mentioned that the soil erosion doesn’t only pollute the rivers but can also cause landslides. The wildlife we mentioned earlier even lost their habitat due to land clearing and Amy’s crops have been destroyed due to the herbicides used.

This might be why Vladislav and Amy have been creating awareness on the preservation of the area thru their Facebook page called Save the Avatar Tree. However, their fight may seem to have come to an end and that’s because… Vladislav and Amy packing up. Img from Malay Mail via Farhan Najib

The State Tourism, Arts and Culture Committee chairman Tan Kar Hing mentioned that the eviction of the farm would be brought up at the Perak state executive council meeting. At the time of writing, PKNP is said to have a meeting with the Mentri Besar’s office on this.

One of Permaculture Perak’s guests has shown the National Geographic video that Vladislav and Amy were featured in to Tan back in 2016 to get his attention. But Tan initially did not follow thru because it was supposedly a decision between PKNP and the farm owners.

“According to a report provided, the local community is also strongly against the extension of the lease to the permaculture farm.” – Tan told The Star.

Amy told us that when they started, rumors spread in local town that they were hiding in the jungle and doing illegal activities. However, no one has come forward to visit them to find out what their place is about.

She also added that they have to hand over the land by the 7th Oct 2019. In conjunction to that, Vladislav and Amy’s friends held a farewell party at the farm to those who never had a chance to experience the beauty there. Amy said that they weren’t even charging their guests for the party. 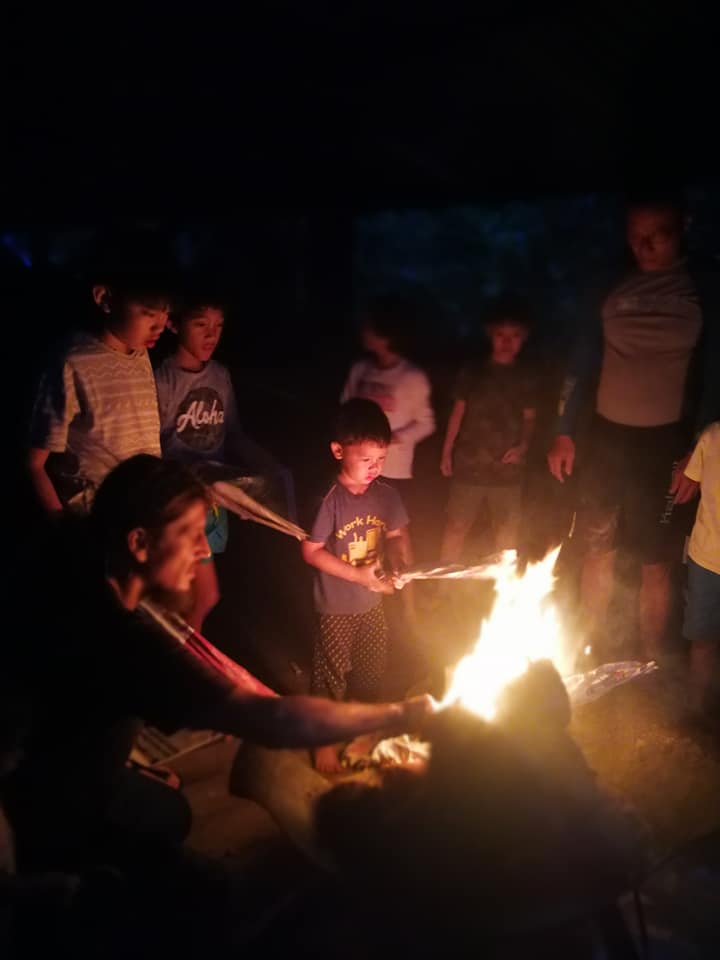 For those who have experienced staying at Permaculture Perak or have watched the National Geographic documentary, you can share your stories at gratitude.permacultureperak.com. Amy set up that website to get the attention of the state govt and Menteri Besar to show that there is a bigger benefit in preserving sustainable projects like theirs.

As for Amy and her family, they have no plans after they hand over the land to PKNP and nowhere to relocate.

“What we offered at our place was very unique to the geography and surroundings. That means it is not easily replicated in another site. I.e. microclimate, pristine jungle streams, being next door to a virgin forest reserve full of wildlife. Off grid.” – Amy.