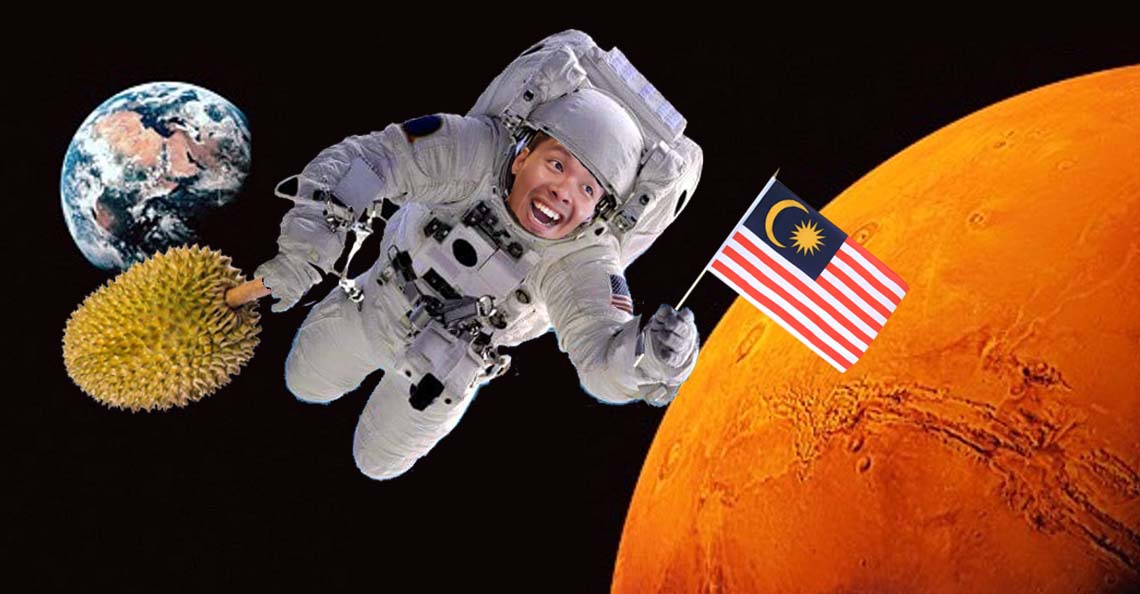 Whether you’re a geek or not, we bet by now you’ve heard about mankind’s mission to Mars. After all those years of wishing, dreaming, and planning, this is quickly becoming a reality for the human race. In fact, it’s so close that one of us could be making that milestone trip by 2033!

It can be a bit hard to imagine for most of us, since Earth is the currently the only known planet with life. But our friends at National Geographic are helping us see our potential future through their new global miniseries, ‘Mars’, which currently airs every Sunday at 10.00pm. It’s a six-part series and we’re currently halfway through, so you’ve only got three episodes left.

It’s a film-documentary hybrid that combines Hollywood’s award-winning directors and actors, film-quality scripted drama, stunning visual effects, and interviews by some of the best and brightest minds in modern science and innovation, including Elon Musk, Neil deGrasse Tyson, Andy Weir who wrote The Martian, and some of NASA’s high-profile former astronauts.

It’s as exciting as Armageddon, but with proper science and a better soundtrack. Check out the trailer:

Now, since this series is set in the present time and in the year 2033, it does give us a very detailed look at what we can expect in our future. That’s why we decided to ask our readers… if they were part of the Daedalus crew in ‘Mars’ on a mission to establish the first human colony, what would they bring with them?

We gave them a 1kg earth weight limit la, since NASA astronauts typically only get to bring that much to space. Check out what they said: It’s durian runtuh! Both in the literal and metaphorical sense.

“Dormant Durian seeds, like those found in the Svalbard Global Seed Vault. I will thrive and science my way until I grow a durian plantation in Mars.

Durians on Mars? Yes we may! Agriculture may look boring, but thanks to Matt Damon and his potato farm in ‘The Martian’, farming has never looked cooler. If you haven’t watched the movie, he basically had to create a farm using a potato, some soil, and lots of human pangsai. Bleurgh.

Although ficitionalized in the movie, didja know that space farming is actually happening already? In August last year, astronauts harvested salad crops on the International Space Station (ISS)! But as for farming on Mars itself, expert Bruce Bugbee says that Mars’ soil is too rich in iron oxide, so a better way would be using hydroponics and recycled water. No need for pangsai. Space lettuce growing a the lab with spacey-macey conditions. Photo from TechCrunch, by Bruce Bugbee, Ph.D., who ran the project

Anyway, in the interest of planting durians, they might actually be nutritious enough to support human life (compared to potatoes)! They contain carbohydrates, fiber, fat and protein, which are the most common nutrients humans need. But obviously will be some time before the symptoms of deficiency begin to show. In the meantime just remember to drink lots of Three Legs cooling water. And omg don’t fart with your crew-mates around la duh. Submitted by Sam. (Eh you can be our designer jor)

We had a few interesting entries, but none quite as detailed as Sam’s:

Wah ok not bad! Let us tell you why.

You may remember an ‘Angkasawan’ program in October 2007. Dr. Sheikh Muszaphar Shukor was sent to the ISS on board the Soyuz TMA-11. There were plans of what Malaysia’s first astronaut would do at the ISS, and one of them was to experiment with teh tarik. It was terribly ridiculed by the press and the public, so we’re guessing that’s why it got scrapped off completely.

But actually right… Revered Malaysian astrophysicist Dr Mazlan Othman said that on the ISS, many experiments were liquid-related. “The press did not give me a chance to explain that Teh Tarik is about fluid dynamics,” she tells Perdana.org. “You cannot make Teh Tarik in space, and given how popular the drink is among Malaysians, people would have learnt about fluid dynamics without realising it.”

It’s kinda sad that we’ve never had another space program after Angkasawan 1. In fact, Dr Mazlan adds that our aerospace industry is not even stagnating – it’s regressing! “We are not building satellites, we no longer have programmes that work towards building our space capabilities,” she tells Perdana.org. 🙁

But despite the challenges in the industry, it’s even more inspiring to see Malaysians who are fighting against all odds… like this Malaysian who’s currently a finalist in an international race to the moon! He’s also the only finalist from ASEAN yo! “My Petronas Twin Towers fridge magnet and bottle opener so that if we come across some dangerous aliens and we happen to run out of weapons, I can still stab them in the eye with the two pointy tips.” – Wong Yee Ling

Hahah. Ok technically alien lifeforms have not been officially proven to be real, but there are plenty of rumours about it. Whether you believe them or not, these foreign thingamajigs are still pretty exciting la. Check the slideshow of weird sightings on Mars so you know what you’re up against in the future. (We died at #13.)

Anyway, since we’re talking about magnets… Here’s a fun fact. Do magnets work on Mars? Well they technically work anywhere, even in space, but Mars’ electromagnetic field is suuuper weak compared to Earth. It’s like comparing Sarawak laksa from a roadside stall in Kuching to the instant laksa packets with waaay too much water. So Yee Ling, we hope you don’t ever get lost in Mars… Your magnet will make for a crappy compass. o_0

NAH, BACA:
The 5 oldest pubs in Malaysia that are amazingly still open!

4. Chili sauce cos don’t wanna be like Matt Damon With a bottle of chili sauce, a potato diet doesn’t sound so bad. Unedited image via collider.com

“Chilli sauce. Not you guys the CILISOS, but real chilli sauce, the type that you dip with food.” – Noreena

Wah. Yea no worries Noreena, didn’t cry ourselves to sleep at all. But ironically we’re actually creating our own REAL chilli sauces (in two types of heat levels!) so maybe you’d take a piece of us too. Hmph.

Anyway, we reckon 1kg of chilli sauce is good enough to keep you going for a while. Chilli sauce (and ketchup for that matter) contains of mainly salt and sugar, but are usually enhanced with tiny tiny amounts vitamins and minerals. You’ll probably need to eat quite a few packets to reach the recommended daily intake, but hey, at least you’ll have a bit more flavor, plus supplements your durian (and potatoes) nicely!

5. Glow in the dark animal stickers to mess with future generations “Legend says that animals lived on the stars…”  Unedited image from aramcoworld.com

“Glow in dark animal stickers… so that in the future, ppl will look at the stars and think that it is a new discovery that animals existed that way if they’re brought to the space.” – Law Pei Thien

Can you imagine that the things we do today would be written in history, educating generations after generations? In 100,000 years, we’d be considered ancient human beings! That is, of course, if we survive the self-driven 6th mass extinction (a.k.a. the one where humans go extinct).

But speaking of ancient stuff and pranks, it seems that our forefathers had a kick in kacauing others too. Take for example Athanasius Kircher (1602-1680), a scholar and central figure of science and culture. He was really smart la basically, but unfortunately he was also the target for people to kacau.

Once, some youths carved figures and symbols on stones and placed them at a construction site of a new building in Rome. They were ‘discovered’ soon after and widely-admired as ancient relics. Poor Anthanasius were asked to interpret them, and after admiring them, he gave an elaborate interpretation of the inscription. Adui… Malunya… I cannot sleep without my bantal busuk, I will miss my family for sure! And of cos a bite of sambal bilis a day for my tastebuds will be special on Mars.” – Shirley Joy

You know how when you go camping, you have to be your own doctor sometimes? Well that may happen to you when you’re in Mars, although you’d probably have a Flight Surgeon working in the command centre on earth. Anyway, what we’re trynna say is, you really really really don’t wanna fall sick on Mars.

We know how important our chou-chous are, but they’re damn dirty wei! Aside from containing dead skin, dust mites, and their poop, it actually also contains a variety of mold, bacteria, and yeast, and it shares the same kind of bacteria… from your toilet seat.

Though it could be a nice place for dangerous bacteria to grow, most of the time there is nothing much to worry about, because you and your bantal share the same kind of bacteria already. Just don’t let anyone else touch it, and maybe try washing it once in a while?

“Photos of real food. I’ll look at them while having my microwaveable meals so that it’ll remind me that 200 days will pass very soon and the food is waiting for me to come home from space.” – Calvin

Wah. Cute thought, but sorry to say that the first human mission to Mars is expected to be a one-way mission… so you err may not come back to eat rendang. (Choyyy.)

But if anything, maybe you can wait for another decade or so before they start shuttling more people over. Fingers crossed they bring the makciks and pakciks that man the stalls at ramadhan bazaars la.

8. Photos of family and crush to stay alive Submitted by Fabin. Why your family so cute one?!

“A photo of my family member and… Mmm…also my crush. A photo consisting of two photos combined is said to be one thing and it’s much less than 1kg.

If there is any distressing situation that might happen, like the spaceship crushing or encountering aliens, I want them to be the last sight of my life cos they’re the most important people to me.

Maybe it can also motivate me to overcome any circumstances so I can meet them again… Maybe can also propose to my crush. Lol” – Fabin

Ngawww. Reminds us of Ultraman… Y’know the part where he’s almost dying and his lights are blinking? Then suddenly he gets help from a higher power or something, and then he gets up to defeat whatever new kaiju terrorising Japan.

Well… not trying to jinx anything, but all sorts of stuff can happen during this trip to Mars. Maybe it’ll be even more dramatic than Apollo 13. It’s a lot further than the moon, with a mission bigger than life itself! So yea, you’ll definitely need more motivation than you’ve ever had to stay alive.

Walao… these fellas seem to have it all figured out!

Congrats, y’all won family tickets to Petrosains and a limited edition National Geographic USB in the shape of the Daedalus shuttle! Okay, okay. Granted some of these are pretty ridiculous, but not if you think of what other astronauts have brought to space: fruit flies, light saber, dead people’s ashes, and… naughty photos with space puns as captions?!

Regardless, we can’t wait to go to Mars! Granted not everyone would get a ticket (or even be chosen) to go, but just the thought of our human race extending and becoming an interplanetary species is incredibly exciting. Let’s just hope that we don’t… umm… ruin that planet too. ¯\_(ツ)_/¯