We bet you’ve heard about the horrible road accident involving a Pajero and two Myvis on the DUKE highway which killed a man, his wife and their infant daughter. The two Myvis are part of a group of six Myvis from the Familia Myvi Club, who were allegedly racing on the highway. ICYMI, read up on it here.

What’s the sitch now? Over the past few days, netizens have been pissed off with the Myvi drivers for ‘illegally racing’ and that they were released on bail. Some even equated them to murderers: In no time, this CCTV video went viral, allegedly showing the six Myvis driving at high speed on DUKE highway: 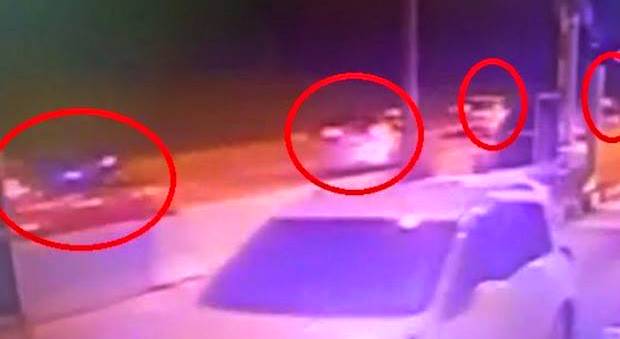 (CILISOS called up DUKE’s PR to check on the validity of the video, but they told us that they couldn’t comment as instructed by the management.)

Things got even uglier when the club’s spokesperson defended their innocence by saying that it was the Pajero’s fault and that they weren’t racing that night:

“Don’t believe what is being distributed online. They do not know what actually happened. Our club is being criticised by other clubs, but we who were at the scene know the truth.” – FMC representative, The Star

But were the Myvi drivers really racing, or just speeding? Does it even make a difference? And even if they were racing, just how often do these races happen anyway? Are they all organised by car clubs?

CILISOS speaks to two people who may help us understand what happens in the illegal racing scene. Joe* used to modify cars in a workshop for racetrack and illegal racing, and Bob* knows hardcore racers in the scene who do it for the money. But first…

Are car clubs used as a front for illegal racing?

Now, FMC is just one of the many car clubs in Malaysia. We couldn’t find a total, but they go according to make, so there’s one for Proton, BMW, Mercedes, Toyota, Honda, Peugeot, something like that. In one of the news reports, the Registrar of Societies announced that FMC could be deregistered if they were really racing. So, while car clubs are not illegal in Malaysia, street racing definitely is (as it is in many other countries). Even WATCHING a race is illegal! According to Section 42(1) of the 1987 Road Transport Act, the authorities can suspend your license, confiscate your vehicle, fine you RM5,000 to RM15,000 and jail you up to five years.

With Myvis coming up in our search a lot, we came across this video which was uploaded on 4th May. We used the screenshot for our feature image.

So what happened? Was it just a case of six friends making a mistake by driving recklessly? Or are car clubs being used as a front for illegal racing?

Our sources introduce us to the world of illegal racing in Malaysia. When you talk about street racing, there are two scenarios, our sources told us:

And of course, there’s the Mat Rempit scene as well… riders, mostly male, aged between 15-25, who like to pull stunts like the Superman, wheelie, etc. There have been studies about them, and movies, and songs… Remp-It the movie. Image from Wikipedia

So anyway, we’ve heard stories about these races… but is the street racing scene big in Malaysia?

“The drag race scene, yes it’s very big. And it’s growing bigger. However, the illegal racing scene – the people doing it purely for gambling, is smaller compared to 10 or 20 years ago.” – Bob

The reason organised gambling races have quietened down is because the roads are not so conducive any more. There are jams till late at night, so if there are races, they’re mostly concentrated within small pocket areas and communities, said our sources.

We tried searching for statistics on illegal racing in Malaysia but there isn’t much info. We did however find a report from New Straits Times about 2,837 illegal racers arrested from 2003 to 2007. That’s not counting the unreported cases so the numbers could be much higher. As for Mat Rempits specifically, a researcher believes there may be more than 200,000 of them in Malaysia. This Professor Rozmi Ismail has done studies on them and even released a book ‘Rempit di Malaysia’. 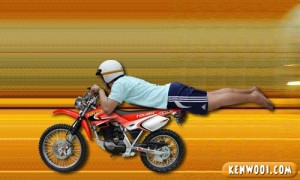 This stunt is called the Superman. Image from kenwooi.com

But for any form of illegal racing, it’s very top secret:

“You never know when it’s going to happen. Usually half an hour or one hour before the race, they tell you where to meet up. Usually it starts around 3am to 4am. They don’t post up in public. Maybe they’ll have their own WhatsApp group, or they’ll call each other. When you’re in this industry, you don’t tend to sleep early.” – Joe

Our sources told us we’ll definitely never find this information online. Sounds like mafia cosa nostra! Even if you can find race videos like this one:

You won’t find dates, times, locations, actual invitations on the Internet. The video above was a race in Genting and you can find loads of race videos at Genting on YouTube. Our friend even shared a video of a friend who drove down Genting in reverse because his D gear rosak!

We trawled forums on Lowyat and Zerotohundred too. There are some people asking about legal racetracks, some complaining about illegal races, and other apparently selling illegal racing VCDs…

We even found a Facebook page called Underground Racing Malaysia, but apart from a few Genting race videos and photos of souped up cars, there’s not much activity and no contact details.

So could the FMC guys have been racing?

We asked our sources if FMC could have been involved in illegal races, or any other car clubs for that matter. Both said that it was highly UNLIKELY. The clubs are just a place for owners and enthusiasts to meet up, look for spare parts and stuff… all very legal. “Probably people were stereotyping coz these guys are car enthusiasts. Or maybe there could be one or two flers who are involved in races outside the club, we wouldn’t know for sure,” said Joe.

The FMC guys – they just people who got together for a common interest. Image from FMC (the site is now down)

Our second source was also sure the Myvi convoy was probably just speed racing for fun among friends with NO organised racing or betting involved.

“You see, it’s just like jogging. If you jog with a few friends and you guys decide to sprint to see who can run faster. Or if you’re cycling with friends and at one stretch, you all ‘race’ to see who can reach the end point first. Same case with the Myvi drivers. It probably wasn’t an organised race.

What would be the point of illegal betting since they’re all driving the same car? What is there to compare? Never in the history of Malaysia has there been people racing six Myvis together [he means for bet racing]. They were probably just driving recklessly.” – Bob

We thought that is a very interesting point. In illegal races, are there car categories and rules? “Nola, there are no rules and no categories. It’s never fair wan,” said Bob. Some cars might be more powerful than others. If not happy with the results, rematch lor.

Knowing it’s illegal, why do they do it? Heavily modified car belonging to a Malaysian who won 2nd place in a race in Australia. Click to read about his story. Image from Tom Goh on Zerotohundred.com.

Aside from that, legal races reward drivers with very little money compared to illegal ones. Some of these guys spend a lot on modifying their cars – up to RM100k or more. Naturally they’d want to make much more in return. Money collected by the bookies from bets can reward illegal racers with 5-digit figures or more. Our source told us that drivers sometimes do it because there is rivalry. Like if one guy says his car is better than another guy’s so they race it out to compare. So altogether it boils down to:

The thing is, if the guys who race for passion could do it legally, they would. One of the problems they face is expensive racetrack charges:

“Sepang overcharges. You have to pay like RM350 for half track and RM500 for full track. There are other places like small go-kart tracks, but you can’t push your car far in those, so racers use the streets. My suggestion is prepare a place for them to race and DON’T overcharge. A proper racetrack, not those small go-kart types.” – Joe Not by removing Section 42(1) of the 1987 Road Transport Act. But by moving the danger AWAY from the roads. Perhaps one of the reasons drag racing has been cropping up a lot is the closure of the Batu Tiga track in 2003, after a property developer took over to build a luxury housing area.

But on 7 – 9 August 2015, the Government will be holding the KL City Grand Prix. Major roads in the Golden Triangle, KL will be closed to create a 3.2km temporary circuit. Additionally, Kelantan is planning to build a racetrack to keep illegal races at bay, and Kedah will have its own racing circuit by 2017. While waiting for the new tracks, why not play it safe with this: 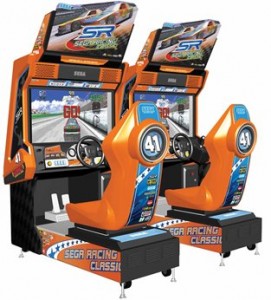 There’ve been various other ‘efforts’ as well like: rebranding Mat Rempit to Mat Cemerlang and each state assemblyman adopting a Mat Rempit (only suggested, never materialised).

There are no do-overs in real life

Even with all the thrills and cash, road accidents are a serious matter. It’s the 4th highest cause of death in Malaysia according to World Health Organisation and Malaysia has the 17th most dangerous roads in the world according to a study by the University of Michigan. In fact, Dr Chua Soi Lek said that we have more people dying from road accidents in one year, than the US has lost soldiers since the beginning of the war in Iraq.

If you are racing, you are putting your life in danger, yes, but what about the lives of others, like this couple and their baby? Out of this DUKE incident, our only consolation is RTD stepping up enforcement and installing more cameras. We certainly hope they keep to their promise. Hopefully also, Malaysia will make child car seats mandatory. Singapore has that law, the US has it too, so why put it off?

And if there’s one thing we can change after this incident – street racers, car club members, and ordinary Malaysian motorists alike – is YOLO. Which in this case we mean, please be careful when driving, because unlike that arcade game above, in real life they’re NO replays. What do you know about the illegal racing scene in Malaysia? Leave your insights in the comment area below.

Share this article:
NAH, BACA:
5 terrorist groups in Malaysia and their modus operandi