Malaysia and Indonesia are like two siblings who love to quarrel over every single thing. Previously, both countries argued over who composed the Rasa Sayang folk song, followed by who owned the popiah delicacy and most recently over the origins of Batik.

And don’t forget football, especially with that laser pointing controversy during the 2010 AFF Suzuki Cup finals. The hostility between both countries’ fans lingered on during 2011 SEA Games, at one point forcing the Malaysian side to request for their players be transported in armored vehicles. “Please… I need to get my autograph!” Image via gettyimages.co.nz

But if ugaiz think the feud between both countries are always arguments about who’s better and more original, you’d be DEAD WRONG! Did you know there was a period in time when Malaysia and Indonesia saw each other as bona fide enemies?

The Indonesian-Malaysian Confrontation (1963- 1966) was a military conflict comprising of mostly border clashes around the Borneo side of Malaysia (basically Sarawak and Sabah bah). Throughout this conflict, the world was able to witness just how much both sides disliked each other. The pictures below should give y’all an impression of how bad things were: Wah! The emotion is strong in this Indonesian propaganda! Screencap image from YouTube user History of Indonesia. This Malaysian banner reads “Long live the Tunku, down with Sukarno” Image via indosejati.com

In 1961, Tunku Abdul Rahman, then Prime Minister of Malaya proposed (with the British’s blessings) combining Malaya, Sabah, Sarawak, Brunei and Singapore into a brand new country that is, Malaysia. The new country would stand to benefit from a strong economy as the gomen could attract international traders with Singapore’s free trade port as well as create goods to export using Brunei’s rich oil reserves and the rich pool of natural resources from Sabah and Sarawak. But..why were the British so willing to give away these prized colonies to the Tunku ? Turns out that the United Nations were pressuring the the British to speed up their decolonization process, which simply meant granting more of their colonies independent rule. At this point, the British were okay with letting colonies like Singapore go free, but they wanted to prevent the nearby communist influence from gaining a foothold as well. So, they turned to the Tunku for help aka forming Malaysia.

However, two countries strongly opposed Tunku’s plan. Country no. 1, The Philippines made a claim on Sabah on the grounds that it was once part of the Sulu Sultanate.

As for country no. 2, Indonesia, its President, Sukarno was giler mad at Tunku’s proposal of Malaysia cuz it RUINED his plans for creating Indonesia Raya, basically his version of Malaysia. To understand why Sukarno wanted to form Indonesia Raya, you first need to understand the concept of Alam Melayu. It states that areas such as the Indonesian archipelago, Malaysia, Singapore, the southern border of Thailand, the Philippines, Brunei, and even East Timor share the same culture and language. And because of that, they should be united as one country. 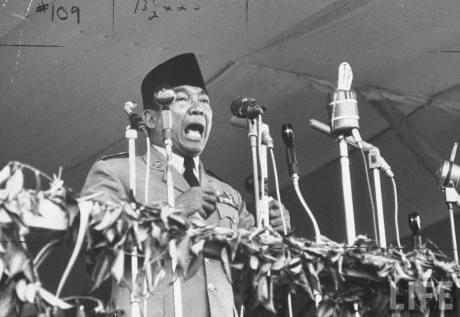 Definitely not a fan of Malaysia. Image from penasoekarno.wordpress.com

As the day for Malaysia’s formation drew closer, Indonesia grew even more desperate. For starters, Sukarno claimed that Malaysia was a form of Western neo-colonialism, which meant that the Western countries still had a tight control on the local economy.

He was also reported to have sang the Negaraku with different lyrics in order to spite the Tunku. This act deeply offended the (then) Malayans.

Tan Sri Zainuddin Maidin, who was a journalist back then, recalled himself criticizing Sukarno for having insulted the Negaraku during a feting ceremony. The ceremony was organized for journalists who attended the Afro-Asian Journalist Conference on 24 April 1963.

“Sukarno sang the Negaraku anthem in the form of popular Indonesian song Terang Bulan. The delegates from the National Union of Journalists (NUJ), lead by Rosedin Yaacob of Utusan Melayu promptly left the ceremony. Earlier, their arrival in Jakarta earlier was greeted with banners stating ‘Ganyang Malaysia’ (Down with Malaysia).” – Tan Sri Zainuddin Maidin as quoted in Utusan Online. (Quote translated from Bahasa Malaysia)

For context, Negaraku was inspired by the Perak state anthem (Allah Lanjutkan Usia Sultan) which shares the same tune with Terang Bulan. So that meant all three songs were composed using the same melody. (For a more comprehensive explanation of how our national anthem was chosen, listen to this podcast.)

Going back to the topic, the Tunku could not take any sort of direct action against Sukarno as he was considered a superstar in his own country. Besides, Sukarno’s long lasting legacy ensured that his successors would find it impossible to match his popularity during their own tenure as president. 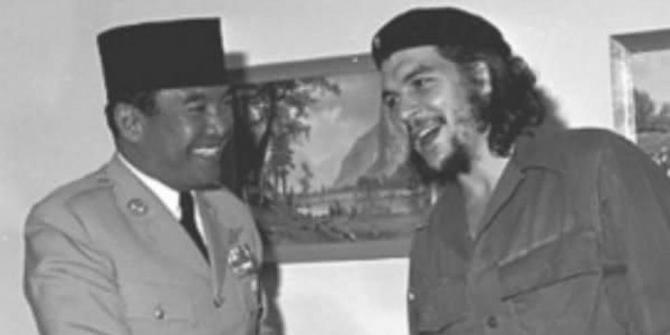 Wah! Sukarno was best buddies with Che Guevara?! Who knew? Image from merdeka.com

“When Indonesia was being pressured by the endless economic struggles, Sukarno successfully calmed the hearts of the panicked stricken citizens. Because of that, he could confidently declare the Confrontation with Malaysia. This caused the citizen to (temporarily) forget about their empty stomachs and their country’s economic issues.”– Dr. Nazarudin Zainun, South-East Asian History expert, as quoted in Malaysian Digest. (Quote translated from Bahasa Malaysia)

Eventually, their spat turned into something uglier

Tired of mere verbal mudslinging, Indonesia took their fight to the next level. The military started attacking various Malaysian military outposts and police stations. Below is a list of some of their military operations:

If you noticed the three points very obviously highlighted in blue, yes, Indonesia actually airdropped around 100 soldiers into Johor (hence the title)! These special forces were assigned to infiltrate Singapore along with instructions to destroy transportation and roads between the island and Johor! Oh no! What will we do? Image via gameswalls.com

Unfortunately for them, a group landed VERY near our troops, who in turn responded quickly to neutralize the threat. Still, it took about a month to round up the whole lot of them. 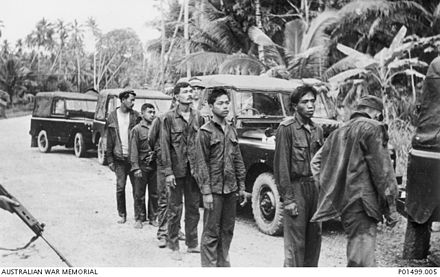 These Indonesian troops were caught in Sungai Kesang, Melaka. Image from wikiwand.com

Eventually though, Malaysian armed forces did prevail with assistance provided by Commonwealth troops consisting of the UK, Australia and New Zealand. UKANZ (UK+A +NZ, geddit?) helped turned the tide of the conflict by launching their own cross-border attacks.

“A strategy allowing ambushes up to 2,000 yards into Indonesian territory or permitting troops to pursue the enemy up to the same distance as well as using mortar and artillery fire to hit Indonesian positions was devised.”- Australian Involvement in South East Asian Conflicts website.

To be fair, the Malaysian side also cari pasal as well 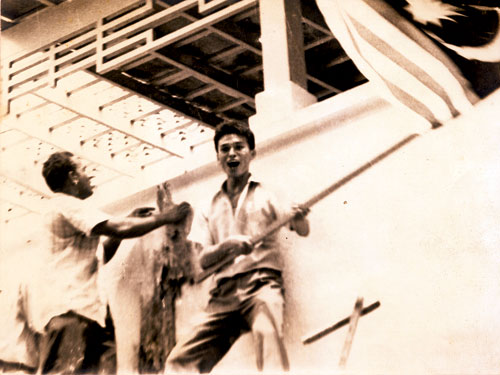 A young Samy Vellu (left) and Utusan journalist Khalid Yunus (right) look pretty excited. What could they be up to? Image from utusan.com.my

On 17 September 1963 (one day after Malaysia was formed, no kidding) a crowd came out to protest at the Indonesian embassy. Halfway during the protest, some of them started attacking the embassy compound and in process took down the Pancasila (Indonesian National Crest) and replaced it with M’sian flag. Afterwards, the Pancasila was dragged by scooters and motorbikes to the Prime Minister’s residence at Jalan Onn, KL.

“They called the Tunku to come out and when he did they hoisted him up, asking to step on the Indonesian crest. However, he refused and they forcibly place him on it. Tunku said afterwards, ‘Why did you make me do this terrible thing?'”- Excerpt from Zainuddin Maidin’s book, Hari itu Sudah Berlalu (That Day has Passed) as quoted in Utusan Malaysia. (Quote translated from BM)

Zainuddin explained in his book that Tunku was unwilling to do the deed as it ran counter to his moderate personality. In another book titled Mahathir Bukan Kawan Saya (Mahathir is not my friend), he also stated that anti-Sukarno demonstrations started to spread all over the country. This was especially evident during the 1964 general elections. It’s on sale at MPH bookstores. Image via zamkata.blogspot

“The 1964 general election which was held in the middle of the Indonesian Konfrontasi abounded with dramatic scenes. Effigies of Sukarno and Subandrio (Indonesia’s foreign minister) were burned and destroyed here and there.”–Zainuddun Maidin in his book, Mahathir Bukan Kawan Saya. (Quote translated from BM)

But the Confrontation only ended thanks to the…Communists?!

The unexpected coup came on 30 September 1965, when members of the Indonesian Communist Party aka the PKI tried to overthrow the Indonesian administration by arresting Sukarno along with kidnapping and killing a number of army generals loyal to him. Rest in peace, victims of the PKI’s coup. Image from wizamisasi.com

The “Gestapu” (short for Gerakan September Tiga Puluh aka the September 30th movement) coup ultimately failed because one of the generals, Suharto was alerted by a neighbor who quickly mobilized loyal troops to defeat the rebels and free Sukarno.

In the long run though, Suharto was able to usurp Sukarno’s rule which was good news for Malaysia as Suharto was open to making a peace deal.

By 1966, talks were conducted at Bangkok between then deputy Prime Minister Tun Razak and Indonesian Foreign Minister Adam Malik. This restored diplomatic relations between both countries. More importantly, the Confrontation was finally over. And now let’s smile for the cameras! Image from bharian.com.my

In the end, both countries moved past their bitter conflict

“Are the sacrifices of the security forces comprising the Royal Malaysia Police, Malaysian Armed Forces, Civilian Machineries and the Commonwealth Forces not worthy of at least being remembered? The family members of those who were killed or wounded in that war are now forgotten, as are their children whose future then were ignored in the defence of the new country and its independence.”- Datuk A.M Ahmad Tejuddin, in an Op-Ed to The Star.

Although Malaysia successfully defended her sovereignty, the price for her freedom was paid for by our soldiers and that of the Commonwealth. Furthermore, Indonesia’s hardships did not end right away as she had to come to terms with a political purge that caused at least 500,000 deaths. The purge was carried out as reprisal for the attempted Gestapu coup.

From observing the Indonesian-Malaysian Confrontation, one could argue that hatred is an infectious emotion especially when examining Sukarno’s hostile attitude and the Malaysians’ hateful responses.

Still, it is comforting to know however that this black mark did not deter Malaysia and Indonesia from joining hands on 8 August 1967 to form ASEAN (Association of South-East Asian Nations), all for the sake of preserving peace in the region. Just like siblings in a family, there is the tendency for both neighboring countries to argue once a while, but it shouldn’t stop them from working together to solve the bigger issues, right? 😉