We recently asked yall to tell us the #1 Malaysian driving habit that annoys the living daylight outta you, and y’all really had A LOT to say!

Together with our awesome sponsors, Allianz Malaysia, we ran the Kereta Kaput Survey 2019 (nama glamour for what’s essentially The Malaysian Driving Survey 2019 la) to find out what are some eccentricities about Malaysians and their infamous driving habits. Prelim info before we dive into the points:

BTW, there’s also a full infographic which you can download below. Ok lesgo!

1. The #1 thing that annoys Malaysian drivers the most is…

In fact, these are the top three pet peeves ranked by our respondents:

FYI it’s not really illegal to switch lanes without signalling, buuuut there’s a general clause against ‘careless and inconsiderate driving‘ which can be used if you dangerously swerve into a lane without warning others.

So… WHO are these people who ACTUALLY don’t use their signals? In a separate question, 13% of our respondents admitted to not using their signals… and most of them are… males who drive Malaysian-made cars! Coming in at a very close fourth is double parking (44%), which is personally this writer’s #1 pet peeve. FYI – although this is illegal, it’s also illegal to harm the offender no matter how much of a jerk he/she is. If you’re caught in this situation… just call the po-po instead of smashing the car windows k?

2. Most Malaysians (91%) are actually pretty responsible when it comes to accidents

When asked what our respondents would do if they were to accidentally hit someone’s car, almost all of them (91%) said they’d stop, apologise and pay for the damages. Ngawww that’s so great! This rings true across all demographic categories, debunking labels that have generally been imposed on millennials/boomers, primary languages, genders, yaddah yaddah.

Only 7% admitted that they would cabut if nobody is in the vehicle! Aiyo… but honestly, if your insurance is up to date, at least you know damages can easily be covered even if you’re the one who made the boo-boo. And when it comes to road insurance, we found out that our sponsor, Allianz Malaysia, is pretty darn popular among our respondents. And that’s not really a surprise too, cos their Allianz Motor Comprehensive Insurance gives people way, way, waaay more value than just a free tow truck and repair claims. For one, it comes with Allianz Road Rangers, a FREE nationwide motor-accident assistance that will be with you every step of the way. (More on that later!)

When we looked at gender differences, we found that more women (42%) than men (40%) would play with their phones while driving. Men on the other hand are more likely to tailgate others and check out hotties on the road! And when it comes to keeping weapons in the car, you’d think that more women would keep them in case of emergencies… but turns out, more men keep weapons in their car, whether blunt (e.g. baseball bat) or sharp (e.g. parang). But do note that it’s ILLEGAL TO BE KEEPING THESE IN YOUR CAR OKAY! It’s generally alright to have a parang in your garden cause it makes sense for it to be there, but if it’s in your backseat… then… err you kinda don’t really have an excuse to keep it?

But then hor… don’t think women are so innocent – both men and women equally admitted to running red lights (19% each)!

If you’ve ever been in an accident or a car breakdown, you’ll know that it is just the WORST thing possible. You’ll have to move to the side of the road, bring traffic to a halt, have other drivers stop and stare at you… Ugh so stress! Photo from our bros at AskLegal.my

When we compared drivers who earned less than RM3,000 and those above RM21,000, we found that those in the atas category were more likely to get insulted by other drivers (17%) and have the offender leave without taking responsibility (47%)… but they seem to have less problems getting their insurance claims approved tho.

We also found that more atas people will get approached by touts (56%)… while those who earn less than RM3,000 are more likely to be approached by helpful strangers. (More on this in the next point!) However, atas drivers also generally have better and safer driving etiquettes – those who earn less than RM3,000 are more likely to run red lights, throw rubbish out the window, and… umm… romance with their partner on the road?!

5. Almost the same amount of Malaysians have been offered help by kind strangers (40%) and TOUTS (37%)!

If someone approaches you after an accident/breakdown to seemingly “help” you, it’s best to be on guard. 40% Malaysians have been offered help by a sincere stranger, and that’s almost as many who were offered “help” by touts (37%)!

What ARE touts, exactly? If you haven’t got a clue, well GOOD for you. Speaking from experience, they’re like really persistent hunters who prey on victims (anyone involved in the accident/breakdown) to lend “help”. From tow trucks to lawyers, they’ll sell you services and typically take a cut from the total bill. Not quite sure if this is illegal, but it suuure is dodgy as hyuck.

34% have experienced the other party leaving without taking responsibility, another 21% have been completely clueless with no help whatsoever. 6% have had their insurance claims rejected, and 3% got stranded after getting their car towed away.

Thankfully at least some have been helped by kind strangers… and its times like these when we truly get our faith in humanity restored.

NAH, BACA:
IGP Khalid is retiring! Here are 5 times he surprised everyone with his decisions

But we can’t always count on strangers to help… for trustworthy assistance round the clock, our friends at Allianz Malaysia has a 24-hour helpline to answer your call for help, after which they’ll send their First Response Bike Brigade (Klang Valley only) to ensure your safety. Then they’ll also get you their Allianz tow truck (yea, not any dodgy tow truck from funny syndicates), who will then send your car to one of their Allianz authorised repair shops. You also won’t get stranded – they’ll give you e-hailing vouchers so you can get home safely. As for the repair itself? If eligible, they can approve Own Damage (OD) claims as fast as 10 minutes. 🙂

6. 4% of road accidents happen because of road bullying, and 7% because Malaysian roads are just BAD 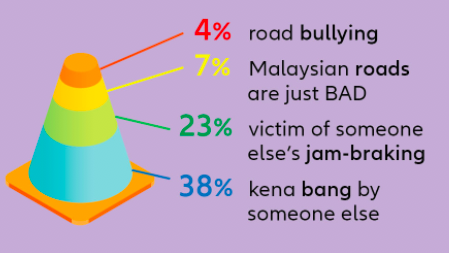 Full infographic at bottom of page

While the two main reasons why our respondents get into accidents are someone hitting them (38%, so sueh) and being a victim of someone else’s emergency jam-braking (23%), we also found that 4% said a road bully came and kacau them. “I’m about to be a mothertrucking statistic!!”

Actually, the Malaysian Institute of Road Safety did a study in 2017 and found that out of 13.3 mil registered drivers in Malaysia, 2.4 million lose their tempers on the road. So it’s like, 2 out of 10 drivers that you see on the road are actually super geram behind the wheel!

And it’s super dangerous too, because it’s one thing to vent your frustrations out by honking at an offending driver on the road… another to fight until someone loses his/her life, like the 29-year-old who recently died in Bangi after a road rage incident. It’s never worth it, you guys.

7. When it comes to dangerous driving habits, scarily enough, 6% of Malaysians watch shows while they drive?!

Full infographic at bottom of page

Okok to be honest, even this writer does it… but only when it’s jammed, cos boring la! And with video streaming apps, it’s just SO convenient… But yes, don’t do it, it’s a horrible thing to do, please think of your loved ones who will cry if something tragic happens to you.

Perhaps something scarier would be that 13% also microsleep while driving! Another 13% also admitted to doing romance things with their significant other while driving… but… hopefully not doing the two at the same time la.

While we can’t help with frisky businesses, here’s a more engaging and Cilisos Media Certified™ method to stay awake while driving: slap yourself everytime you see a Proton.

8. Surprisingly, most respondents in their 20s are driving cars and road taxes paid for by their parents -__-“

While 25% of our respondents in the 21-29 year old age group said that they were the ones who paid for their cars and road tax, a whopping 55% of them said that all their car-related stuff (e.g. loans, road tax, insurance) are paid for by their parents! Nice life right!

But their cars not the super atas ones la… most of them (65%) are Malaysian cars, followed by Japanese cars (23%). And they seem to really like cutesy names for their cars: Actually, Malaysians don’t seem to really know what to do in a road emergency…

Our survey showed that 1 in 4 Malaysians don’t actually know what to do after getting into an accident.

Well, the first step is to always stay calm and assess the situation as best as you can. Take sufficient notes and visual proof (take photo la) on the damages, exchange details with the other driver (e.g. IC and driver’s license), and make a police report within 24 hours. This is also the time to get in touch with your insurance agent, who will then advise you on the next steps to get the damages fixed. 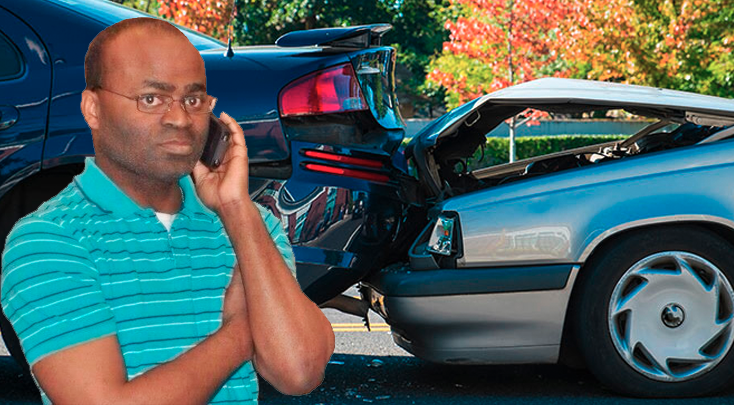 But when it comes to insurance, we were shocked to learn that more than a third of Malaysians don’t even know which insurance company they’re tied to! In another question, only 51% knew exactly what their policy covered… 28% knew that there’s a free tow truck (which is pretty standard across all companies), and the remaining 21% had zero clue whatsoever. It’s super important to know these things, so you’re prepared to make the right decisions in these stressful situations.

On that note, our friends at Allianz Malaysia has a pretty well-rounded policy that covers you throughout the entire process. Apart from some of the benefits we’ve mentioned above (a 24-hour helpline, a First Response Bike Brigade (Klang Valley only), a professional Allianz-branded tow truck, e-hailing vouchers so you’ll get home safely, and Own Damage (OD) claims approval as fast as 10 minutes), to make things super easy on your end, they’ll even deliver your car to your doorstep (only at selected Allianz Malaysia workshops) OR provide you with an e-hailing voucher so you can pick it up hassle-free! (Terms and conditions apply, for more info please go to their site.) The 6 key touch points of the Allianz Road Rangers. For more info on these, click here.

So with the Road Rangers, no need to worry so much if you ever get into an accident. But even so, don’t laaa drive like a Fast & Furious wannabe and annoy other drivers!

As always, for all you data freaks out there, Cilisos is gonna leave you with MORE stats before we end:

For the full infographic: