Within our respective fields, industry awards are a great way to know that your hard work and dedication has been acknowledged, which this writer discovered when he won the Baca-Baca Awards for Best Original Digital Publication in 2020.

And alongside this sense of self-satisfaction is the implicit assurance to you, the reader, that this article is going to be quality. Maybe the writer’s gonna get a Pulitzer in the future, eh?

Except here’s the problem – that award doesn’t exist because we made it up.

But if you did get your expectations up, it explains why companies include awards they’ve won on product brochures, or lining their walls with plaques and trophies – people are more likely trust companies that have won awards before. While there’s nothing wrong with this from both a marketing and own horn-tooting standpoint, it can be misused because a lot of the time, no one actually checks where the award actually came from.

All this came to a head on Twitter when… 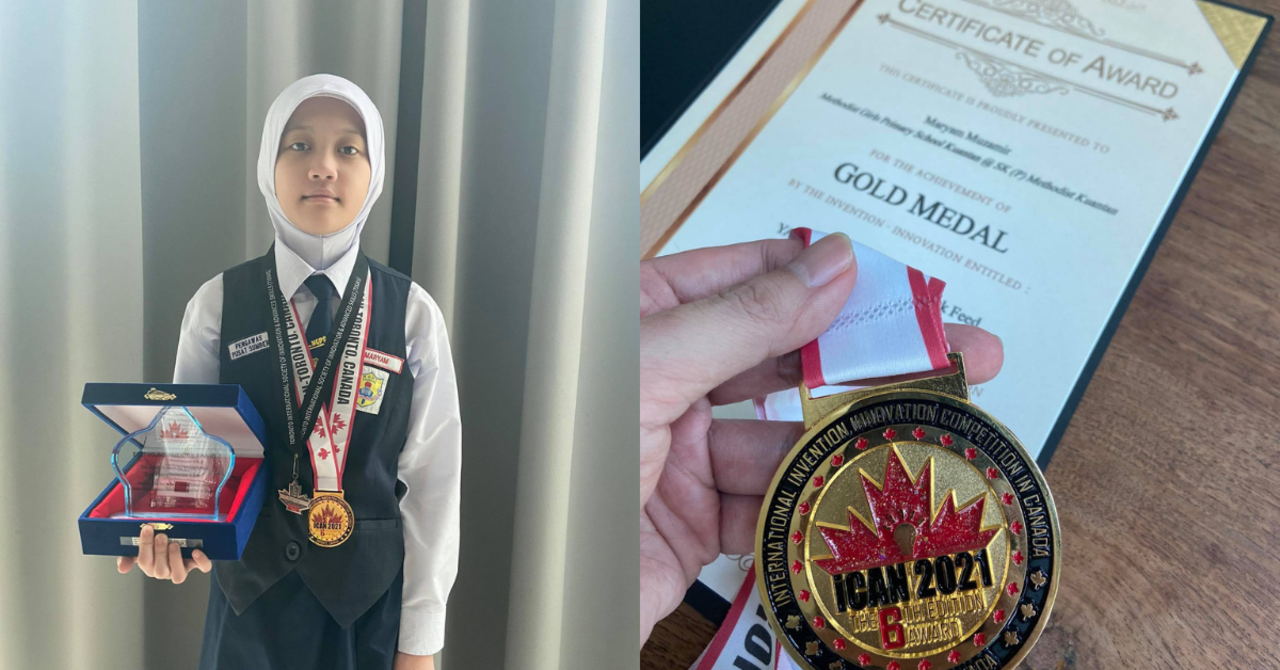 Drama aside, we’d like to congratulate Maryam Muzamir for her achievements. Image by Says

Here’s the backstory: Maryam Muzamir, a really smart 11-year old figured out a way to turn sea snail shells and shrimp into livestock feed. She took part in the 6th International Invention Innovation Competition (iCAN) held in Toronto, Canada this year, and managed to snag three awards. Ismail Sabri congratulated her on her achievement, and James Corden gave her a shoutout on his late night TV show.

Then suddenly, a guy named Nik (who also emailed us, btw) kinda put the legitimacy of the awards into question when he accused iCAN’s organizer, Toronto International Society of Innovation & Advanced Skills (TISIAS) of being a “Pay fee, get reward and certificate scheme“. It’s a super-long thread, but the screenshot below kinda gives you an idea of where he’s going with it: Nik also clarified that he’s not saying Maryam’s achievements were questionable, but rather that these specific awards recognizing her achievements were. Either way, this didn’t go down well with Maryam’s family and TISIAS, who refuted Nik’s claims in both an email response to Maryam and a letter of support, and said that they would be taking legal action.

While this incident filled our online drama quota for the week, it also reminded us of a time when CILISOS was nominated for an award – which we were really excited about until we found out that we kinda had to pay for it.

Some awards and competitions require payment

The post that triggered our memory came from an acknowledgement by Maryam’s dad that fees were paid to submit her invention to various competitions, and that it was pretty standard practice. This gave us a flashback to the time we were nominated for *cough* writing good articles *cough*, which got us super stoked… until we were told that we had to buy a marketing package, pay an entry fee, and 10 seats for a table if we wanted to attend. Unfortunately, we couldn’t afford the almost RM13k it would’ve cost us, so we had to give our one chance of bragging rights a pass.

In all fairness, paying doesn’t guarantee you a win (cause that would be bribery) but if you don’t pay, then your chances of winning are a big fat zero. So is this basically another money making scheme? For legal reasons, we gotta tell you that this is a joke.

Wellllllllll…… it depends on how you look at it. Awards and award ceremonies cost money. A lot of money… which has to come from somewhere. The Academy Awards get paid by advertisers to air commercials and also backing from sponsors, while the Nobel Prize is funded by investments made by the Nobel Foundation. Fun(d) fact: The money given to Nobel Prize winners fluctuate based on the returns of these investments.

But for many new or smaller organizers, charging a table fee would be the easiest way to cover the cost of the event – kinda like Ang Paus at Chinese weddings. There’s also an argument that charging an entry fee actually adds to the credibility of the award or prize, since it creates a barrier for entry – basically filtering those who’ll submit low-quality entries for the sake of trying.

So while some of the reasons might seem fair, another problem with having to pay a fee to enter is that…

In a way, you’re nominating yourself Getting nominated for an award is, in and of itself, an exciting moment for any individual or organization. You’ll hear a lot of this sort of talk at any award show you tune into or attend…

…and with just cause. The nomination process for the Nobel Prize in Physics, for example, has strict requirements in place for nominators. Nominees are screened by an appointed Nobel Committee for Physics that’s comprised of experts within the field. No one can nominate themselves, cuz’ if they could, everyone would nominate themselves.

NAH, BACA:
Wearing tudungs used to be controversial in Malaysia?! How did things change so much?

But it’s completely different for others, such as on this website of an award we won’t specify:

Basically, people can submit their work or portfolio to the organizer, who then will sift through everything and shortlist the submissions they like.

What we’re trying to say is that different organizers have different systems in place – all with the goal of finding worthy nominees. And if you think about it, allowing people to nominate themselves may work in some areas or industries that are either too wide where a panel of nominators would miss out worthy entries; or competitive enough where no one in their right mind would nominate their rivals.

But hey, perhaps it’s the people with IQs higher than our salaries that put it best, in their page on Why self-nomination is good:

There is absolutely nothing wrong with drawing attention to your accomplishments, about which the Foundation would have no other way of knowing. – From the Mensa Foundation

Some awards in Malaysia were found to be legit scammy

Back in 2019, The Star interviewed a trio of local entrepreneurs in the tourism trade who received word that they were eligible nominees for the Asia Pacific Tourism and Travel Award, organized by an organization called the Asia Pacific Tourism and Travel Federation (APTTF). Admittedly, none of them had ever heard of APTTF, but they did hear that Tourism Malaysia and Malaysia Airlines endorsed the event. That was the first red flag and they missed it; the rest of the red flags started appearing after they each paid RM4,500 for a table.

The awards ceremony was a nightmare. The first impression was good – there were photo walls, the refreshments were in no way lacking. That’s where the legit-ness ends, though:

Unfortunately, this wasn’t the only example, as The Star also published another exclusive highlighting how awards are being used by certain organizers as a cash grab rather than to honor achievements by using the exact worst justifications we highlighted above.

“I was told that to qualify for the awards, I needed to pay for the nomination, a table (at the awards ceremony), marketing exposure or the trophy … If I don’t want to pay, I won’t win.” – Jan Wong, entrepreneur, as quoted by The Star

Not all awards are made equal, especially on marketing material Please don’t let this happen to you.

While there’s no perfect way of ensuring that awards are 100% fair, it’s fair to say that most organizers do their best to honor the spirit of recognizing the achievements of the people within their scope. However, you can probably also expect some people to willingly pay their way through a scammy award just to say they’ve won something. And because awards can look and sound impressive, seeing one on a brochure or website gives an illusion of prestige – kinda like how we automatically assume every car with a metal badge is driven by a Datuk or Tan Sri.

In other words, it kinda works both ways. If you’re looking to win an award, it’s best to do some research to make sure the organizer’s legit or at the very least recognized. And if your buying decisions are based on how many awards a company has won, it’s best to do a Google search if you’ve never heard of that award before. Even if you have heard of an award before, like these ones:

…chances are, you’re not 100% sure what they’re actually about, or how they work, and it always pays to (yeah, we’re really sounding like a broken record by now) do a little snooping.

So yea, this is basically an article telling you to not simply get impressed by awards or titles just because they’re there – and the long convoluted way of getting to this point is why this writer hasn’t actually won any awards for writing.