A few days ago, Malaysian netizens were in an uproar when a video of several drivers driving on an emergency lane and not giving way to an ambulance on duty went viral. The ambulance was rushing to an accident scene on KM228 of the North-South Highway, and had an initial e.t.a. of 20 mins, but ultimately reached an hour late due to the emergency lane being blocked, resulting in the unfortunate deaths of two of the victims.

Image from The Malaysian Times.

The JPJ has declared that they will look into the matter and take action against the individuals involved. But instead of leaving it at that, maybe we can all take this chance to find out more about ambulances, and what we can do to ensure that these unfortunately preventable incidences never happen again.

We approached a few individuals serving in ambulance organisations to find our more about their roles, and thankfully, they were kind enough to answer all our kepoh questions. For starters:

*names have been changed as requested

1. All they need is a Class D license… and a little more 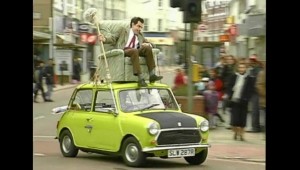 Sometimes you can’t help but wonder, “Drive so fast, the driver got qualifications or trained properly or not one oh?”

Jeremy*, who drives an ambulance for a non-profit institution, tells us that all you need is a basic Class D driver’s license. Yes, that’s your car license, and yes, this means if you’ve passed your probation, YOU also can sign up to be an ambulance driver! But wait, there’s more:

“To become an ambulance driver, definitely there will be training required…. Under the Ministry of Health (Red Crescent), there will be certification required to be a driver. There is also the defensive driving course so that the driver would be informed of what are the techniques to execute based on the conditions they experience.” – Jeremy

In fact, in addition to the certification required (which must be renewed every two years), ambulance drivers are required to go for additional training before they are allowed behind the wheel of an ambulance, such as the aforementioned defensive driving course.

And no, defensive driving isn’t when your boyfriend gets defensive and insists “We’re not lost! We’re just taking a longer route.” It’s when you take proactive steps to anticipate dangers on the road and prevent them, such as driving with your headlights on, or keeping a minimum 3 cars distance at all times.

Woah. Mad skillz these people have. They are trained to anticipate dangers on the road, whereas the average Malaysian driver would probably be more prone to causing danger on the road, especially when we do this: 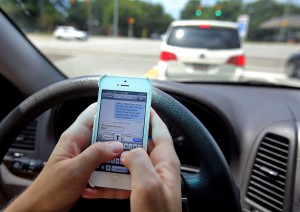 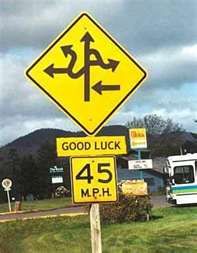 Which is almost as confusing as this. Image taken from www.pinterest.com

Ambulances sometimes seem to function as though the traffic laws in Malaysia don’t apply to them (breaking the speed limits, going past traffic lights that are red, etc). So actually, they have to follow or not one? The answer to this seems to be a bit complicated.

“When on duty, the normal traffic rules like signaling and driving on the correct lanes apply. For traffic lights, we need to be very careful in negotiating it. As far as I know, speed limits don’t apply if it’s an emergency.” – Jeremy

Okay…so traffic light rules apply but speed limits don’t then? But wait, Andy*, another ambulance driver from a separate organisation tells us:

“If in an emergency case (going to an emergency destination), definitely need to on siren and avoid traffic light to get the casualty.” – Andy

Huh….so now it appears that both traffic lights and speed limits don’t apply when an ambulance is on duty? What does the rule actually say?? Well, according to the Malaysian Health Ministry, ambulance drivers are required to follow traffic rules, including stopping at red lights and not breaking the speed limit. So how? Who’s correct here? 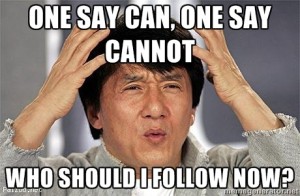 The closest possible explanation is that of legal conventions (for all you lawyers out there, please feel free to add your opinions or suggestions on this). A legal convention isn’t a convention full of lawyers, but an accepted way of doing something. Like, how ministers step down when they are implicated in scandals, even when they may not have necessarily broken the law. *Hint hint*

It is possible that while ambulances are legally required to follow the rules of the road at all times, when they are in an emergency (lights on, sirens blaring), they get some leeway in doing things, and the police are more than willing to “tutup mata” to their (careful) speeding and (careful) rushing past red lights. Sounds dangerous? Possibly. Which is why some ambulances have been known to get into accidents in the line of duty.

(Though to be fair, if you are going to get hit, a team of medical responders hitting you is probably the best possible outcome no?)

3. But if you kena accident, this is what you can do: We wrote about what might happen if you hit a government vehicle on duty (which includes ambulances). However, bear in mind that if you hit a private ambulance (St John, Red Crescent, First Ambulance), it’s different from hitting a government ambulance, and the same traffic laws apply (make report, let police investigate).

It may get even more complicated, because if you hit a St. John’s ambulance (or Red Crescent) that happens to be serving Hospital Kuala Lumpur, you are technically hitting a government ambulance. So…errr…to keep it simple, just…don’t hit them la k?

But what if they hit ME?!

If you are really that unlucky and actually get hit by an ambulance, then you will have to make a police report, and let the police investigate it. As also covered in our previous article, you may be covered by their insurance, or you may be charged for obstruction of public duty, depending on who’s fault it is.

By the way, speaking about obstruction of public duty…

4. You can lose your car license if you tak kasi jalan!

Jabatan Pengangkutan Jalan (JPJ), states that is an offence if you fail to give way to a government vehicle like a police car, bomba, or ambulance, where you may acquire 8 demerit points for every offence (if you consistently collect more than 20 demerit points within at least 5 years, your driver’s license will be revoked…so don’t play play.) 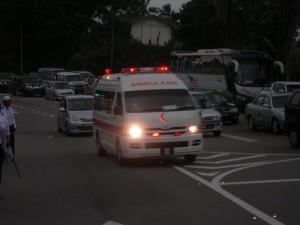 But well, as most Malaysian drivers would know, the demerit system is difficult to fully implement. This may cause some drivers to actually be slow to respond, or like in this Singaporean case, not respond at all. As Jeremy mentions:

“…. many emergency response personnel are frustrated at road users who are ignorant in letting way for an emergency vehicle to pass … because there is no easily enforceable law in dealing with drivers like them.” – Jeremy

There are demerit points that can be given out, but our Kejara system that deals with it isn’t very efficient in enforcing it, and this causes a lot of frustration to ambulance drivers who are genuinely trying to do their job. So… technically nothing really bad will happen to you if you tak kasi jalan (sorry…#ClickbaitTitle), but we should understand that our actions can be the difference between life and death for someone else.

5. But what if they fake the siren just to skip jam or go faster? Not fair right?! 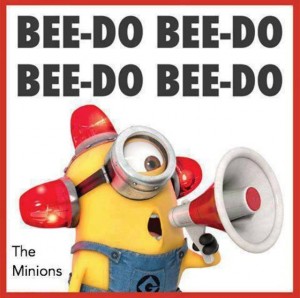 What if it’s just this guy in the ambulance making those noises? Image taken from pinterest.com

Okay, to be absolutely fair, there have been cases where ambulances in Malaysia were caught abusing their sirens (e.g.: skipping jams, when it wasn’t urgent, buying goreng pisang…) These have shaken our faith, resulting in an increase in complaints over the years. But you know who else is pissed? Ambulance drivers themselves!

Abusing sirens is not a light offence, and can come with some heavy consequences such as being suspended or losing the job. So it’s not as though every ambulance driver will just casually switch on their sirens just to escape every jam they are in (at least we hope not).

But if this doesn’t convince you, then…

Use matematik to decide whether to give way or not!

Here’s a very very simple (I promise) math/philosophical equation on how to make decisions, created by a Dutch polymath (a.k.a. genius) named Daniel Bernoulli. It goes like this:

TL;DR– Even if 9 out of 10 ambulances are cheating you. the fact that there is still a 10% chance to save a life will (almost) definitely more than make up for any “loss” that you may experience in letting the ambulance go first. So in other words, even if kena cheated 10 times, if can save one person on the 11th try, also worth it kan? 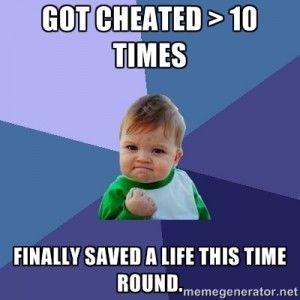 Driving an ambulance isn’t easy. Drivers and crew are faced with life-or-death scenarios every day, the job is risky and dangerous at times, and sometimes the public that they are serving can misunderstand them.

Hopefully by understanding the details of their job better, the Malaysian public can collectively make their jobs easier by sticking to proper traffic rules (giving way when you see them, not driving on emergency lanes, etc), and giving them the encouragement they need to continue serving the public to the best of their abilities. Life is precious, and we owe it to ourselves to ensure that incidences like what happened a few days before does not happen ever again.

So here’s to you, the ambulance drivers and crew that have saved countless lives thus far. Thank you for your service and dedication to the Malaysian public, from the bottom of our hearts.