It’s interesting to note that Raub Australian Gold Mining (RAGM) has SUED not only Malaysiakini, but Free Malaysia Today and two BCAC activists for defamation. However, FMT, it’s reporter, and one activist apologised to them, and RAGM withdrew their suit on them. Anyway, the news of this lawsuit result was what alerted us to this issue.

Now here’s the backstory… RAGM sued them because of three articles and two videos published in 2012. They had alleged that the gold mine is responsible for cyanide that is polluting the environment and harming people’s health in the Bukit Koman area in Pahang. 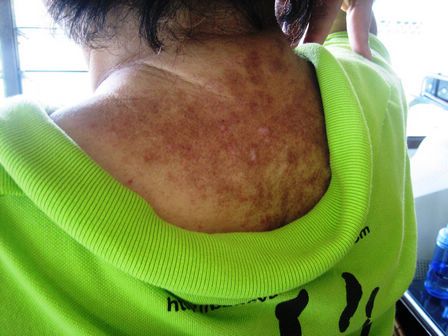 Within a month after RAGM started its Carbon In Leach (CIL) operation plant in February 2009, residents from nearby villages claimed they started suffering from skin rashes, red and watery eyes, throat irritation, shortness of breath, nausea and vomiting, dizziness and others signs of health problems.

Every time it rains in Bukit Koman, everyone runs for shelter because they’re are afraid of chemical vapours which they allege come from the gold mine. Even in the air, they say they can SMELL chemicals!

“They will hurriedly bring in the laundry and shut themselves indoors. We are so afraid of being exposed to it (chemical vapours) because it flares up existing skin conditions, our eyes get red and itchy, and our lungs fight to breathe.” – Hue Fui How, Secretary of Ban Cyanide in Gold Mining Action Committee (BCAC) NGO, Free Malaysia Today

In 2008, a cyanide mining expert from the US Dr. Glenn Miller released a report stating that the mining company failed to provide sufficient information to the public, (about the cyanide, hazardous waste, gas emissions and to address everyone’s health concerns). Besides that, a dermatologist with 26 years experience had results showing there is ‘irritating’ material in the air.

Even the Health Ministry agreed there’s an “abnormal health issue” going down in that town, reported Free Malaysia Today. However the Ministry did not pinpoint it the cause of cyanide in the Parliament response.

Finally getting tired of inaction, the villagers formed an NGO called Ban Cyanide in Gold Mining Action Committee (BCAC) to pressure the authorities to protect their safety and the environment. 10,000 people gathered to protest in Raub in 2012. So what actions the villagers want to see done? Well, it’s important to note that they’re not asking for the gold mine to shut down or anything…they simply want RAGM to STOP using cyanide in to extract gold.

“We are not against profit-making businesses, it just happened that this gold mine operates in a very unethical way that pollutes the environment and bring harm to our lives.” – Wong Kin Hoong, Chairman of BCAC, Malaysiakini

The thing is, cyanide is used in gold mining everywhere around the world

Some of you will know that cyanide is poisonous. During World War 2, spies would carry cyanide pills with them in case they were captured by the enemy. And some of you might remember a scene from Captain America where a HYDRA agent swallowed a cyanide pill to commit suicide.

But did you know that cyanide is produced in the human body?! And by over 1,000 plants?! Ermagerddd! Cyanide has been used widely around the world for gold and silver mining for OVER 125 YEARS. In the form of a dilute solution, it dissolves and separates gold from ore, so that miners can extract pure gold. This process is called leaching. Click here for video. An old cyanide drum at an abandoned mine in California, US. Image from Wikipedia

Despite being used in 90% of gold production, it has caused some controversy and some countries have banned it due to its toxic nature, for example the Czech Republic, Hungary and the US states Montana and Wisconsin. However, the European Union and Canada continue to use cyanide because the regulations used are safe.

The safe amount of cyanide accepted is 100-500 parts per million. In Malaysia, the standard is 4.7 parts per million, so it sounds like we’re quite far from the limit. It’s been proven to be SAFER than the alternative – which is liquid mercury (previously the main method to extract gold). This is so because cyanide solutions degrade quickly in sunlight.

Having said that, a few famous disasters have killed a few people which you can read about here. BUUT these disasters happened because of leakages or spills, not because of normal usage.

So how does a person get poisoned by cyanide? Unfortunately it’s very hard to detect, the effects are very similar to the effects of suffocation, like that feeling when you climb high altitudes. It stops the cells from being able to use oxygen. But the signs are quite similar to what the villagers at Bukit Koman experienced – dizziness and difficulty breathing.

You know what tho, there are ANTIDOTES for cyanide poisoning! Hydroxocobalamin (Cyanokit), sodium thiosulfate and sodium nitrite (Nithiodote). Maybe if the villagers had access to the antidotes, their condition might improve? If that happens, then everyone can conclude whether cyanide was indeed the cause of their problems! If not, then it could be something else that’s causing it.

Now let’s hear RAGM’s side of the story… Main entrance to the mine barred with barb wire in 2012. Image from Gan Pei Ling on peilinggan.com

Now that we’ve shown you the villagers’ side of the story and talked about cyanide use in the mining industry, let’s hear from RAGM’s point of view. First of all, the mining company DOES NOT DENY using cyanide, so at least they’re transparent about that. BUUT, they do not believe that their cyanide usage is harming people or the environment at Bukit Koman New Village. Daily cyanide readings displayed on a board. Image from BCAC’s Facebook

RAGM is approved by government bodies – one being the Department of Environment (DOE), which approved their Preliminary Environmental Impact Assessment (PEIA).

*The name itself clues us in on what this PEIA thing is, but just to explain it briefly, it’s an assessment to make sure any project does not cause environmental problems.

The shocking thing is, DOE signed their PEIA so long ago in 1997 WITHOUT the residents’ knowledge and residents only learned about their use of cyanide in 2006. 😯 When residents filed for a review of the PEIA approval in the High Court (2009), Court of Appeal (2011) and Federal Court (2012), all cases got rejected because they were told that they should have filed it within 40 days of the approval. HUH, how were they to do that if they didn’t even know?! Moving on, the gold mine also has the support of the Pahang Health, Human Resources and Special Functions Committee.

“Studies by various institutions such as Universiti Sains Malaysia, Universiti Kebangsaan Malaysia and the Institute for Medical Research have shown no significant evidence that hydrogen cyanide is inflicting health problems on Bukit Koman residents.” – Datuk Norol Azali Sulaiman, Chairman of the Committee, The Star

They even gave reporters a cyanide measuring demo, adding that other mines use the same chemical, though no one else in other villages complained before.

So… is the gold mine really poisoning this village in Pahang? DON’T PANIC, this is just a drill! Image from The Star

PHEWWW, it’s been pretty heavy so far, although we doubt the conclusion is going to get any lighter. 😥 Normally in an incident like this, some people’s reactions might be to automatically support the villagers. We cannot ignore VISUAL proof of the villagers’ conditions – 78.1% of villagers claimed to have health issues happening to them.

On the other hand, cyanide has been used in gold mining everywhere in the world for more than a 100 years and studies have shown it’s still ok to use as long they do not go over the permitted dosage. That’s another thing, there were no reports of RAGM employees complaining of cyanide effects.

Aiyo, so who to believe? The villagers? Or the gold mine company? And, what’s gonna happen to them all now?

Well, as far as the government is concerned, they see no reason to close the mine. There is no closure yet at this point, but we can only tell you the status at this point of time.

There might be one solution to the problem… as mentioned, if the villagers take cyanide antidotes and the problem goes away, then it looks like cyanide might be the culprit! If the antidotes don’t work then it’s possibly something else that’s affecting their health.

Even better news, experts at Curtin University may have found an ALTERNATIVE using environmentally friendly glycine:

To be honest, when we first encountered the topic, we too instantly thought against the Gold Mine company.