Recently, there was something strange in the neighbourhood of a Kelantan town. Most of us have probably never heard of the sleepy little town of Bachok. It may seem famous for the natural beauty of its beaches (at least according to Google image), but what’s troubling the town lately is actually more of the unseen.

Previously haunted by flying fireballs, the residents of Bachok are now rushing home before dark, to avoid having to encounter the Big Foots (big… Feets?) that are stalking the villagers. These Kelantan Big Foot know your name … and can even give you a fever!!!

According to some villagers, they’ll hear voices calling out their names at around 7 – 8 pm, and the unfortunate ones that unknowingly respond to the calls are cursed with a fever that lasts for weeks!!! Zubaidah Abdullah, told Sinar Harian that since she was a little girl, she had always been haunted by dreams of 2 towering ape monsters that would pop out from a tree behind of her mother’s house. 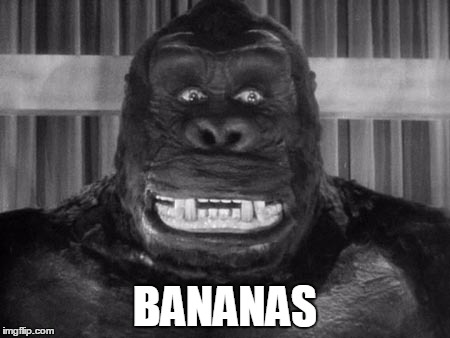 It was reported that her siblings also experienced the same strangeness, but Zubaidah also revealed that she had experienced 4 miscarriages, which she suspects has something to do with the strange dreams. Even after seeking the help of traditional medicine, she still could not conceive successfully.

Looking back in time, there had been many sightings reported in Malaysia. The two major incident involving Big Foot, or more famously known as the Orang Mawas (or Orang Dalam, Orang Lenggor, Jarang Gigi) actually happened not too long ago. First was in 2013, when a man in Kampung Kepis Baru (Seremban) discovered about 200 mysterious footprints in his rubber estate that seemed to lead into a forest nearby. Then in 2014, a trail of large and strange footprints were found near the Endau Rompin forest reserve, and they trailed on for about 1 kilometer. After the State Wildlife and National Parks Department checked on them, they said that it COULD be elephants dragging their feet as they walked, resulting in the weirdly long shape. But, that wasn’t conclusive. Malaysia is actually a focus point for Big Foot enthusiast around the globe, especially Johor. At some point in 2006, Abdul Ghani Othman (then Chief Minister of Johor) even appointed a committee of research scientist to investigate the sightings. His move gathered quite some praise from the cryptozoology community.

The two big names you’ll find linked to Orang Mawas are Vincent Chow Kok How (Johor Malaysia Nature Society chairman), and explorer/author Harold Stephens. While Vincent’s credibility is a bit tainted due to releasing fake photographs on his website (which no longer exists), Harold Stephens was a travel writer for Washington Post, and has traveled across the globe, diving, hiking, and even once breaking the record for longest motor trip. His “legendary” article: Abominable Snowmen of Malaysia, published in August 1971, still captures the imagination of many believers around the world. In the essay, he described his experience of trekking in the Johor forests, where he found huge human-like footprints by the river.

“There in front of us were footprints, human footprints, but not ordinary ones. They were enormous, 19 inches long and 10 inches wide. We called the others. They came half running and half swimming across the river. Bujong came running and stopped dead. He shook his head. “Orang Dalam,” he said and returned to the boat.” – Harold Stephens wrote in Abominable Snowmen of Malaysia

He also told cryptomundo a chilling story that he had never revealed. On an expedition in Johor to find a prehistoric cave painting, they stumbled upon “footprints of a jungle giant“. Things got creepier the next morning, when they woke to find the footprints all around their camp site. Some ang moh holding up a alleged print cast in Malaysia. Photo from thelivingmoon.com

That’s some spooky stuff, but these accounts doesn’t really match with what was described in the Kelantan town mentioned previously. So what could the mysterious beings in Kelantan be?

The Kelantan Big Foots might be something totally different

The founder of Pusat Perubatan Islam Al-Qalam, Datuk Seri Baharuddin Abu, suspects something else is at work. After his own investigation, Baharuddin suspects that it’s likely to be the doings of a Saka Warisan.

In Malay folklore, Saka is part of a group of malicious spirits called Jinns, but it possesses a family and can be passed down to the next generation from the nenek moyang. Jinns are more than just Malaysian folklore, because they are actually mentioned in the muslim holy book. Take a look at this video of Jinns in action.

In the olden times when Islamic teachings haven’t even reached the shores of Malaysia, when the man of the house needed to leave home for long periods of time to earn a living, they often asked for the “blessings and protection” of Sakas. For this, they would usually enter into a contract with them. In fact, there are actually several different kinds of Saka, each giving a different “blessing”.

Sometimes, even after the original contract signer passes away, the spirit doesn’t just leave. Some families are aware of the inheritance, and will perform rituals from time to time to keep it pleased. Others are completely unaware that their family still has a spirit guide around, and that’s where the problem lies. Unattended Sakas will cause a number of problems, including recurring bad dreams and difficulty in getting pregnant.

So what can people do against evil magic spirits? There are a number of options, from cutting the contract, to reciting holy words, and even to transfer the Saka into a nail, and nailing it into a dead tree (according to Badd). It’s just good to know these things sometimes, in case we encounter strange things like our pets turning into Micheal Jackson or something. Why do Malaysians keep seeing tall hairy giants in forests?

According to the Big Foot Field Researchers Organisation, Malaysia has the highest number of Big Foot sightings outside of U.S.A and Canada.

The leading theory on Big Foot is the Bigfoot-Giganto Theory. About 100,000 years ago in southern China, lived the Gigantopithecus (King Louie from the live action Jungle Book movie), the largest ape to ever walked the earth. The theory suggests that cousins of this giant monkey could have survived and are now hiding far away from the bustling cities. According to geography, it’s entirely possible for them to migrate from China into Malaysia. But until now, no one has ever provided convincing proof of Big Foot’s existence. No videos, no clear photos, no giant human remains, and not even conclusive evidence of fur or droppings. But Big Foot researchers are not giving up, extensive studies were done, and they proved that there might be an unknown hairy creature lurking in the wilds.