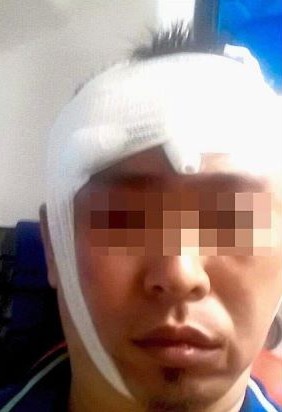 Khor received 30 stitches on his head. Image from The Star

A Penang man was assaulted with IRON RODS and sticks by five illegal jaga kereta (car park attendants) in Weld Quay on 21 November. The 38-year-old man who wanted to be known only as Khor, was left bleeding but he managed to drive to the hospital where he received 30 stitches on his head. What’s worse is he was with his two YOUNG SONS when the attack happened!!

Khor had asked the jaga kereta why must pay coz he was just parking by the roadside, however the jaga still insisted on taking his money. As he didn’t have change for RM50, he went to a shop to break the note, but when he returned, he kena attacked anyway. Click here to read the full story.

And there are a lot more cases of attacks by illegal jaga kereta happening in Malaysia! One 52-year-old victim was BASHED a couple of times with a helmet until he blacked out.

In another lagi drama incident, two illegal jaga kereta tried to SLASH their victim with a knife in broad daylight inside a shop, after insisting his car door ‘hit’ a woman (their accomplice). The woman summore pretended to be unconscious, lying down behind his car. WTH?!?

Walao, so teruk! And this problem is growing, not going away And the abuse we mentioned above is not an isolated case. Illegal jaga kereta flers continue to be a PAIN in the BACKSIDE with their violence (although some of them can be polite and helpful if you willingly pay). A lot of Malaysians are frustrated no action is taken against them despite public complaints.

Some people interviewed by reporters say there is no set amount demanded, according to those interviewed. It’s usually a one-off fee, not hourly (like malls), so if you want to park short while just to buy roti, or you park whole day, you pay the same. Sometimes some of them even provide cheapo receipts which they prolly bought from KK Mart or something.

“Even though sometimes it is up to you to decide how much to pay them, the minimum fee is RM1 and I would just pay up because I fear that they will become aggressive and scold me if I do not.” – Chan, 52, kindergarten teacher, The Star They’re especially active at night, during weekends and public holidays. Image from NST

Aiyo, what’s the problem? Stop whining and just pay them la, some of you might say. But isn’t it unfair to you and other drivers coz ya’ll still have to buy a legit Majlis Perbandaran parking coupon from the machine to put on your dashboards when you park in a public space. It’s like you’re paying DOUBLE!!

Geez, you summore memang pay TAXES for the Government to build these public roads. Technically it’s the gomen’s turf to collect.

“These illegal parking attendants are abusing public amenities for their own benefit by sheer exploitation and outright bullying. Where are the local authorities, police, Government? Local authorities (DBKL) should take heed of our complaints and do something. This has to change.” – Iman from KL sent in a letter of complaint to The Star

And did you know these illegal jaga kereta flers can earn between RM1,500 to RM1,800 a month by extorting RM1-RM5 per vehicle?! Walao, minimum wage in this country for people who do actual work is only RM1,000 max.

NAH, BACA:
Despacito got banned by RTM?! We asked 2 ex-RTM DJs how songs can get into trouble.

Hang on, why is this illegal activity growing? Police tak tangkap? 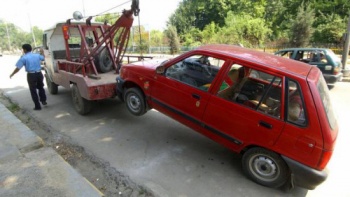 Some illegal jaga kereta even use tow trucks to extort money from victims. Image from The Sun Daily

Ok, so we know that Malaysians be hatin’ that their money is being extorted from them for parking in free, public spaces…even so, why is this activity growing rather than de-growing? Kipidap, y u no report polis?

The awful truth is that some corrupt enforcement officers might allegedly have been BRIBED by parking touts. P. Jeyaraman, a florist who supplies flowers in KL areas, told reporters that he’s seen it. He has complained to Dewan Bandaraya Kuala Lumpur (DBKL) several times but no action has been taken. Of course it’s not correct to say every enforcement officer is taking bribes because got touts kena arrested also la.

So Penang finally flipped a table and said we’ve had it. They began a crackdown on illegal jaga kereta in 2014 and Johor soon followed and then KL. BUUUT Penang had initial hiccups where Chief Minister Lim Guan Eng was told by police that they couldn’t arrest the jaga kereta as there were NO LAWS under which to charge them. They could only nab those who used violence against their victims and charge them for assault (Section 325 or 326 of the Penal Code for causing grievous hurt). But that’s not enough… That’s like using panadol to alleviate pain rather than antibiotics to murder the bacteria.

So we asked CILISOS pal and lawyer Fahri Azzat what illegal jaga kereta flers can be charged with:

“It depends. If the land is private, the land owner can take action. If it’s public, I feel certain there is a bylaw to empower officers to stop them.” – Fahri told us

Then he gave us the law, which is found in Section 50(3) of the Road Transport Act 1987. It states that anyone who waits by a road or parking place, to force motorists to let them watch or clean their cars, or to direct the driver into a parking spot, shall be guilty of an offence. Yup, technically this means you can take action against pushy car cleaners. Five men were charged for touting. Image from The Sun Daily

And true enough, we did come across reports that illegal jaga keretas have been caught and charged under the Road Transport Act. For immigrants detained, they will be investigated under the Immigration Act for misusing their work permits.

So what can we do when we encounter an illegal jaga kereta? BRING YOUR OWN GANG AND CHOKESLAM THEM! Just kidding ok. Here’s what you can do:

If you are parking in private property, we can still understand why they would charge. But for public areas where the parking coupon machines are right there, why pay parking touts? They don’t provide you with any service at all, except for their dance. Their point-and-wave dance. And they get RM1,800 just for that pffft. The point-and-wave dance. Image from NST

Ipoh City Councillor Lai Kong Phooi suggested to have more police beat bases around cities (a beat is the territory and time that a police officer patrols) and a hotline number that connects directly to the City Council enforcement departments for people to lodge reports.

We know it’s a bit mafan to say no or park further away, but the authorities are encouraging people not to give in to their demands. Your choice lor, at the end of the day. If everyone stops feeding this “business” eventually it will die off. One less problem to worry about.