So Malaysia’s caught in an international crisis again. This time, it’s alleged corruption on property prices in Melbourne, Australia. Here’s the back story: *Flashback to 2013* MARA Inc. bought Dudley House (a student apartment block) for what it thought was a ‘good deal’ at A$22.5 million. But that got The Age questioning – WHY ON EARTH would anyone pay such an exorbitant price for a building that ‘looks like an IKEA cupboard’? On the left is the real Dudley House. On the right is an IKEA cupboard. Image (of Dudley House) from Student Hostel Network The Age did some digging for 8 months and found that the property was supposed to be worth only A$17.8 million. Which means they ballooned the price by A$4.75 million. So what happened to the balance? Allegedly pocketed as bribes by Malaysian officials, claims the newspaper. Here’s a digestible graphic on the event sequence, but for the full story read The Age’s report. A summary of what happened. Image from The Age

The whole time – from 23 June, when the paper blew the case wide open – we can’t help noticing…

Tuesday morning, the news broke… Thursday morning, the Australian Federal Police (AFP) start raiding adi. In Operation Carambola, they seized computers and files from a home in Vermont South, and possibly a few other properties across Melbourne were targeted, The Sydney Morning Herald reported.

Wow, what is this force? Why they so hebat one? Wait for Malaysia to catch up la and together-gether investigate. 🙂 But let’s not rest on our laurels too long shall we? We’re already being compared to their efficiency:

“The speed at which the Australian police have reacted to the media report puts our own force to shame.” – Tony Pua, Petaling Jaya Utara MP, The Malay Mail Online

Meanwhile in Malaysia, no action will be taken against the MARA execs involved for now, coz Prime Minister Datuk Seri Najib Razak said they were innocent until proven guilty. Granted, that is the legal right to anyone who stands accused, and at this point, we haven’t much to go on, since Dato Lan bin Allani ‘cannot recall the Dudley House dealings’, and MACC hasn’t charged anyone since starting their investigations 4 months ago. Even though The Age has published several leads.

But is this their normal speed mode, or is there a bigger issue? Their property market like Tiny Tower game. Image from applenapps

Why crack down on a Malaysian deal so cepat? Cannot stand that Melbourne has practically become a mini Malaysiatown is it?

Kidding, kidding. Jokes aside, we don’t doubt their efficiency, but we’ve heard about a property oversupply in Melbourne. In fact, quite specifically APARTMENTS, while other types of housing are at least more controlled. The numbers are quite scary yo, the first quarter of this year alone saw 36 new projects and 6,000 new units springing up. In 2 years, it’s expected to more than double to 15,000!

As a result, 1 in 4 central Melbourne property sales made losses rather than profits. On average, people lost A$34,301, but add all of Melbourne’s losses and it reached a total of A$5.81 million. Shoot! Could this be why the police are clamping down more urgently on the case?

NAH, BACA:
4 strong letters Tun Mahathir sent to other world leaders... and how they responded o_O

But Dudley House’s sale memang went overboard la. It’s just a student block and it’s only 5-storeys high, not some luxury apartment with gilded doors and gold trim. A$22.5 million; how do you not trigger alarm signals like that, right? Yeaaa… things boiled over in a pressure cooker environment.

But you know what, The Age pointed out another issue that might give us a clue why the police acted so quickly.

Australia has become a corruption hotspot Every year, Transparency International holds its Corruption Perceptions Index and without fail, Australia was always one of the top 10 ‘cleanest’ countries. The only time they fell below 10th was once in 1998. Now in the latest 2014 rankings, they’ve fallen to….11th place!!! Malaysia leh? *scroll scroll* 50th place. Oh. (Singapore is at 7th place as you can see). Screenshot of results from Transparency International

Where’s the dirty money coming from and where’s it going? Mostly, these foreign funds come from Asian Pacific countries and it’s invested into Australian properties, according to Financial Action Task Force anti-laundering agency. One of the attractions could be incentives, like fast-tracked Australian visas, for foreigners who invest big money there. It’s so bad that even Papua New Guinea’s (a country that’s notorious for corruption) chief corruption fighter Sam Koim called them the ‘Cayman Islands of the Asia Pacific’.

At least Australia is trying to right this problem. Once, even the Federal Treasurer himself Joe Hockey intervened to force one of China’s richest men to divest a A$39 million Sydney Harbourside house because he used front companies based in tax havens to avoid foreign investment restrictions. In the MARA deal, allegedly several front companies were used – one is a Singapore wedding cake bakery, another called Thrushcross Land Holdings in the tax haven British Virgin Islands.

All this could have been what lit a fire under the AFP’s butt. But the deal could have remained a secret if it hadn’t been for… 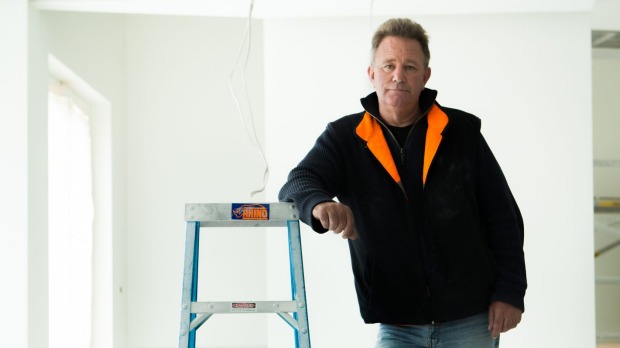 John Bond was not paid for his work on Dudley House. Image from The Age

John Bond, 53, owns a window and door company. When he won the lucrative contract to help build Dudley House, he dreamed of expanding his business. But 2 years working on the development, John, his staff and other contractors were owed several millions. “They [the developers] kept putting it off. It became one week. Then 1 month. Then 6 months. And I thought to myself, something is terribly wrong here. They seem like they are never going to pay us,” John related in The Age.

The final straw was when his son Cooper wanted to go to an interstate football carnival and John couldn’t pay.

“I couldn’t afford it. I had to borrow money from my own parents to send Cooper to Darwin.” – John, The Age

By 2013, he was broke, desperate and determined to find out who got rich from Dudley House while the others faced ruin. First he and other creditors went to court to demand a new liquidator, Pitcher Partners boss Andrew Yeo. So Andrew got a bright young employee Odie Henzel on the job, and that’s how it all started.

To be in 50th place on the Corruption Perceptions Index is quite bad la. Don’t we want to see more guys like John Bond in Malaysia? People who stick up for ethics and the truth? Since Najib became PM, he introduced 6 National Key Result Areas and emphasised tackling corruption as one of the most important.

Dr. M once said: “The condition of a leader, a country, must be… seen to be clean. Not just to be clean, but to be seen to be clean.” HUHH?! Wouldn’t the rakyat rather have a properly clean Malaysia, outside AND inside? Our National Oversight & Whistleblowers (NOW) aspires to see Malaysia develop into a matured society and say TAK NAK to abuse of power.