Once again, our Prime Minister has made a comment about Chinese people and social media has exploded again. Post by The Star Online. Here are some of the choice quotes from various sources.

And here’s the surprise…   These quotes are NOT about the current Chinese Demands quote.They’re from two other times that our PM has tried to gain the favour of Chinese people.The first one was from his attempts to gain the Chinese vote before GE13, and the second was a comment from an absolutely epic CNY video that he did.

So why orang CINA tak suka when Ah Jib Kor tries to make friends with them? Let’s look at these incidents a little more closely.

First things first. We’re sure all of you want to know where that epic screencap featured image comes from (to those who don’t already know), and it’s here.

Unfortunately, the responses were predictably bad. Comments ranged from accusing him of being a perv with little chinese girls, to epic troll fights between opposition and BN supporters. That last comment is pretty interesting tho. It says that our PM has the right ideals, but the actions don’t seem to reflect these ideals, and people feel conned.

Lesson hopefully learnt: If you wanna do PR, make sure it’s believable

Last year, Najib REALLY went all out. He made his son speak Mandarin on national radio, and of course peppered known Chinese populated areas with posters (and angpows) of himself in this outfit. Which one guy somehow linked to a costume for the dead. Now in this case, Najib was really just trying to be friends, but of course, the minute someone made the link, it went viral on social media.

Why? Cos to a certain extent, we are all The One Who Always Hates On Najib.Thankfully, there were some people who noted that this outfit can be used by anyone, not necessarily the dead.

Nice to know that Malaysians can be moderate. Still…

If you’ve never seen this one, we’re surprised you came across this article. In this now infamous incident, ‘someone’ paid for PSY to come to Penang, in a rather shameless obvious way to convince Penang-ites to vote BN. The P Emcee tried his best, asking to loud approval “ARE YOU READY FOR PSY!?” and the crowd responded “YESSS!”. After three times, he thought it might be safe to sneak in “ARE YOU READY FOR BN!?”, and the quick-witted crowd shouted back “NOOO!”.

Out of all the things that hurt, this one probably hurt Ah Jib Kor the worst. Here he was taking the time out of a busy GE13 campaign to organise a Yee Sang tossing session, with the world’s biggest superstar in tow, and he literally gets boo-ed off stage. To be honest, when we watched this video, we felt kinda sorry for everyone on stage, and whichever misguided PR person they hired that orchestrated this nightmare.

This is the infamous video of Najib’s speech at the recent MCA night. Yes, he did say those famous words (skip to 2:51) –

But keep in mind that he felt he was addressing mostly to MCA people, so perhaps it was more of trying to rally the troops rather than demanding support from the general Chinese population. He also said this…

“We as Barisan National Must Make Sure that every single Malaysian must feel that they are better today than before.”

But of course, that line wouldn’t whip social media into a frenzy. Here’s the amount of people sharing the article about the MCA quote.

And this is only in the Malaysian Insider.

NAH, BACA:
A M'sian teapot cult??! 5 Groups that kena fatwa for being deviant

And the video above with more quotes from the same speech? It had less than 200 views at the time of writing this article. Why? Isn’t anyone interested in watching it to see if it’s what he really said? Or if he said anything else? No, not really.

Because unfortunately, Chinese people already have such a strong opinion of him in mind that they believe everything that’s being published in online media (which is mostly opposition skewed).

And unfortunately, for the most part, Chinese people are right.

If you notice anything about the first three instances, they’re all in February 2013, a few months before GE13. In the months after, there’s been little interaction between our PM and the Chinese people. Search for “Najib CNY 2014” and you won’t find any costumes, any angpows, and definitely no music videos. He went to a few open houses, called a bit for unity and peace, and left a rather horribly ominuous quote at the MCA gathering.

“I like to express my warmest greetings, a very happy Chinese New Year to our Chinese friends in China, I believe this year is very auspicious year for China-Malaysia relations because it marks the 40th anniversary,” Najib Tun Razak, The Malay Mail Online, Jan 31 2014.

Aiyo. But deep down inside, I (and this opinion might not be shared with everyone in this office), feel that Najib on some level does want a better Malaysia (an opinion shared sometimes by LGE). I mean, here’s a 61-year-old guy who we assume has bucketloads of money, enough to last him 5 retirements. Why would he want to put himself in a position where he has to work everyday, and answer to so many people? All I can think of is because he genuinely loves the country.

Unfortunately, at least to the Chinese people, you’re showing it in all the wrong ways.

Dear Prime Minister, If you really want to show your love to the Chinese people, here’s what I’d recommend.

1. Don’t ask for anything in return (the Rakyat don’t owe you anything).

2. Call for unity, and SPEAK UP when others speak against unity. (can start now)

3. Show genuine support NOW, through fair economic and political policies, not just before the next election (Penang would be a good start)

UPDATE: One of our readers has cast doubt on LGE’s claims that the government is no longer supporting Penang. Scroll down to view Rafidah’s counterpoint, which we’ll be exploring more soon!

If somehow this does reach you, and we see these things happen, then I, the very Chinese editor of CILISOS will personally vote for you in the next election. No need angpow even. 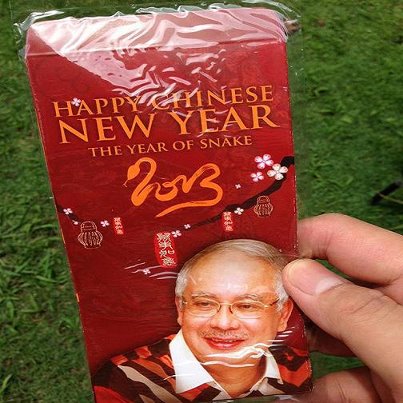