[Update 8 July 2015] OMG! LPF recently released a set of guidelines for what should or should not be censored and it won’t even let members of the opposite sex lean on each other! (Under ‘Melayu’, on local productions shown on television at least.) For those who want to have a look at the documents, you can see them here.

The documents basically breaks down what should be potong-ed in terms of local Melayu, Cina, Tamil, and Inggeris productions. Potong stim also.

Example of the breakdown of what should be potong-ed. Documents taken from siakapkeli.my

Ok ok, we have to be honest. When we first saw this, we were shocked to see just how many things have been banned on television. Our first assumption was to think that the censorship had just gotten tighter. And we were ready to write a whole other article about it. Fortunately, we decided to give the LPF another call.

And that’s that really. From our latest conversation with the Board it seems that the regulations haven’t actually been strengthened, just streamlined.

So…errr…yay! Awkward side hugs for everyone! (Sorry we’d say kisses but you know, censorship.)

When you think of the Malaysian cinema experience, some of you might recall the bad subtitling, the annoying person behind you who insists on cramming his knee into the back of your seat, and, more importantly, the very obvious cuts to the film telling you where the juicy parts are.

However, we’ve noticed that we’ve been seeing much more T&A and hearing way more F-bombs in recent years. 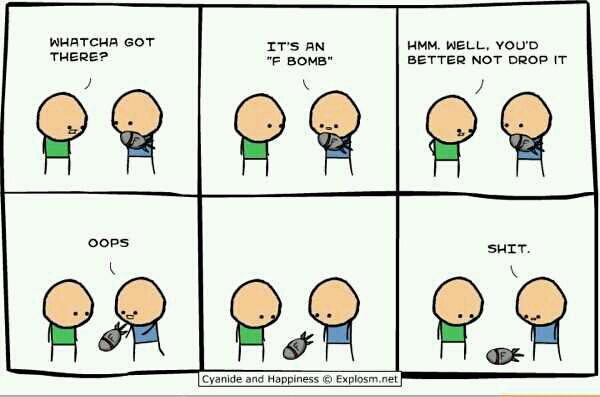 In case you were wondering what an F-Bomb was. Click to read moar comix!

This is, of course, purely from observation so we aren’t sure if someone in the censorship board ate a slow-acting chill pill or we’ve finally hit puberty. What do you think ?

But to the question of censorship though, we spoke to directors Khai Bahar and Benji Lim; actor-producer Michael Chen; and director-actor-producer Julian Cheah. We also called up the censorship board themselves, though they prefer being called the LPF (Lembaga Penapis Filem) so we’ll just mention that here and go on calling them “the Board” for the rest of the article because we have an awesome joke that won’t work if we called them “LPF”. Also, these notes are only for cinema-bound movies as those shown on TV and sold as DVDs are rated under different specifications.

1. It takes about 3 days for a movie to be evaluated.

Julian Cheah and Michael Chen tell us that a company first needs to be registered with FINAS (National Film Development Corporation) and the LPF before filming begins. Julian and Michael noted that, while related, the two bodies are under different ministries (FINAS under the Ministry of Communications and Multimedia while LPF is under the Home Ministry) and apparently do not share the same databases, so you’d have to register separately with both.

So what actually goes on in during a film evaluation?

The LPF representative we spoke to tells us that the censors work in teams of three, noting down the timecodes of the scenes that need editing and why they need to be removed. Each team reports to the Chairman of the Board who makes the final call when the team is unable to agree on something. This is the Board joke we wanted to make. That’s it. Sorry.

She also told us that a typical submission takes about 3 days to evaluate, with a report on why certain scenes or dialogue need to be cut as well as the movie’s maturity rating. So yes, they DO tell you why you need to take something out.

Julian Cheah added that the Board will also require that all other materials related to the film such as posters, trailers, and advertisements be evaluated as well.

2. The Malaysian Film Censorship Act is similar to the Sedition Act

Okay okay calm down. It’s not what you think. The similarity only lies in the fact that both Acts originated from the British colonial era.

Like a Pokemon of moral decency, the censorship act evolved from a 1895 law for theatre performances. It was later amended to also cover film screenings in 1917 as it started becoming more widely available to the public. The original “film censorship board” was located in Singapore and was fully staffed by Orang Puteh: Article is a downloadable PDF. It’s not a virus!

The important dude in that list (and the rest of this article) is Number 4 – Thomas MacDonald Hussey. Unofficially called the Father of Film Censorship in Malaysia and Singapore, Captain T.M. Hussey served as a censor for 22 years and put in place a lot of criteria still followed by the LPF today.

“All films are objectionable which depict murders, robberies, the modus operandi of thieves, counterfeiters, or other criminals, violent assaults on females, or which will obviously tend to produce racial ill-feeling, set class against class, outrage the religious susceptibilities of any section of the  community, bring the laws or the administration of justice into contempt or ridicule, encourage immorality, pander to salacious instincts or give rise to a feeling or unrest or insecurity.” – Hussey’s guidelines as mentioned in Amizah, et. al. (2013)

NAH, BACA:
What's the difference between abolishing GST and zero-rating it?

3. There is a LOT of stuff that cannot be aired

When we asked, the Board told us that they have a book of guidelines that that all censors follow when reviewing a movie. From what we’ve heard from the directors we spoke to, we think the book looks like this: *Update 8 July 2015: Well, now with the release of guidelines, you don’t need to go hunt it down! Click here. (Same link as the one on top of this article.)

Citing a few local movies as an example, Khai Bahar recalls a segment in the collaborative movie Cuak where a Muslim/non-Muslim couple living together discusses marriage and the woman’s eventual conversion to Islam. Cuak was given a classification of 18 due to the Board being a little uncomfortable with the themes of religious questioning, Khai says that he accepts the rating, since the only other outcome was it getting banned.

He does think that the movie was passed (though with the 18 rating) because they married in the end. Had they broken up, the verdict might have been quite different.

In case you’re wondering, the rating system is as follows: 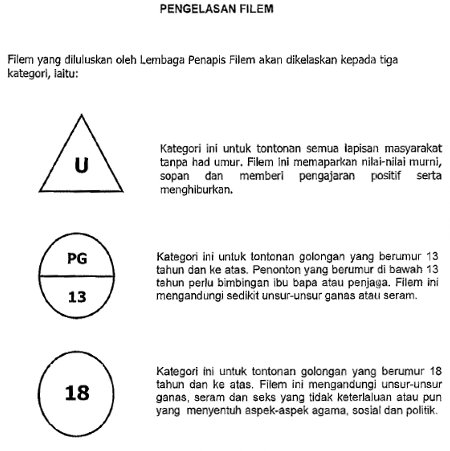 Also, Khai and Benji both noted that the Board does not like vagueness. Khai noted that, in the same story segment in Cuak, the Board asked them to cut out any scenes in which the characters mentioned that they lived together even though there was dialogue explicitly stating that they didn’t have sex. This is presumably due to the perception that a couple that lives together loves together, and exactly in the way that you think; you dirty minded person you.

So what happens if the movie involves morally-questionable characters? Well, for best results you can either make sure they get what’s coming to them or that they realize the error of their ways and repent.

4. Buttt….. the board can be quite flexible (sorta)

This is where we go back to the question about why the F-bombs and T&A seem to be a little more prominent nowadays. It might actually be that the rules have been relaxed, that the Board is now manned by more liberal people, or a change in policies.

But at the end of it, we sorta get the feeling that it boils down to this:

No, we’re not saying bribery is involved (shame on you for thinking so). After receiving the report from the Board, the producers or distribution company is free to make appeals. It’s just that international distributors have more influence and are able to afford more appeals. On the other hand, local production companies may not always have that kind of budget to pay for continuous edits and downtime and are more likely to comply.

Some decisions may also be economic – in the sense that a rating and cuts may be influenced by how well they think a movie will sell. So say if a movie had a bunch of A-list stars with a lot of cuss words and violence, the Board may let both slide but slap on a mature rating OR give it a less mature rating but remove the swearing and allowing the violence.

Is there a different set of criteria for local and international movies?

This question was met with a resounding “no” from everyone we spoke to. But what might be true is that local movies might be held to a more stringent interpretation of the rules since there’s an idea that local movies are reflective of local ideas and lifestyles whereas America is full of busty women and exploding cars full of cocaine. Ok ok that header is a bit misleading. What we meant was, Malaysia doesn’t edit foreign movies on our own – we send them  back to where they came from with all our feedback, and they work on it before sending it back to us.

When the Board rep told us that, it was a bit of a surprise to us. But this might – and we’re making an assumption here – MIGHT explain why cuts are sometimes inaccurate (Y’know, like when the innocent word before or after the F-bomb gets cut instead of the F-bomb itself) because they’re cut based on timecodes.

If you are old enough to remember the days of pirated VCDs, part of the gamble was to get a clear copy of whichever new movie was out at the time. There would be those that were very obviously recorded from a camera snuck into the cinema, and there were the preview copies which had these things: To us, those running numbers meant that the copy we bought would be free from random heads bobbing about, background commentary, and a laugh/scream track; but to censors, they’re the numbers that need to be noted down for cuts.

While there are many that complain about the relative lack of creativity in the Malaysian movie industry, with our output mainly consisting of Rempit, Hantu, and Hantu Rempit; we actually do have a passionate indie filmmaking community coming up with some pretty good stuff.

And someone just pointed out to us that Hantu Rempit is an actual thing. We don’t know whether to cry or laugh.

In regards to censorship, everyone we spoke to didn’t actually have a problem with the Board other than the relative vagueness of their guidelines. In fact, some of them mentioned that these guidelines and their associated inconsistencies encourages creativity among local filmmakers like how the American Hays Code got filmmakers to get the message across in indirect, implied ways.

“…to get around it, we just put in as much subtext as possible. It’s an interesting challenge.” – Benji

But what about the other aspects of filmmaking? How do you even start making a movie even? Well, we aren’t done with this topic yet cause we do have some other film-related topics in the works, so as they say in the movies –