UPDATE: Oops we originally put this as a dragon dance. It’s actually a LION dance. duh.

So this video recently surfaced, of 5 kids in Kuching doing a super-low-budget lion dance. Trust us, it’s epic. If we could find these kids, we’d vote them into parlimen!

This video was also uploaded by SukanStar and a few other fb sites, but as far as we can tell, Durian Kopi-O was the first.

The best thing is... this kinda multi-cultural loveliness is apparently quite normal on the East side of Malaysia, since it’s common for Dayaks to perform Lion Dances. One comment from FMT says that “the kids lived in a Malay village called Kampung Bako Kuching, near Muara Tebas.” and that “visitors frequently stopped to watch this village troupe perform.”

In fact, another one of our Kuchingite readers verified this.

“Not normal for just any kid. But generally speaking very normal to be open to other cultures. Can’t confirm its Kuching tho. Don’t recognize anything. If you ask me they look Malay…Lun bawangs are typically fairer and won’t be many in Kuching” – Kuchingite CILISOS reader A rather odd green lion dance somewhere in Sarawak. Image from aquarticles.com

“Sarawak DAP regards the traditional Chinese lion dance as a great way to enhance unity among the Chinese community as well as between Sarawakians of all races. Secretary Alan Ling Sie Kiong said this year’s Chinese New Year (CNY) celebration by the party’s lion dance troupes involved many young members of the native Dayak community.” – The Borneo Post, Feb 2014

Hmmm… why does this seems better than most CNY ads we’ve watched? 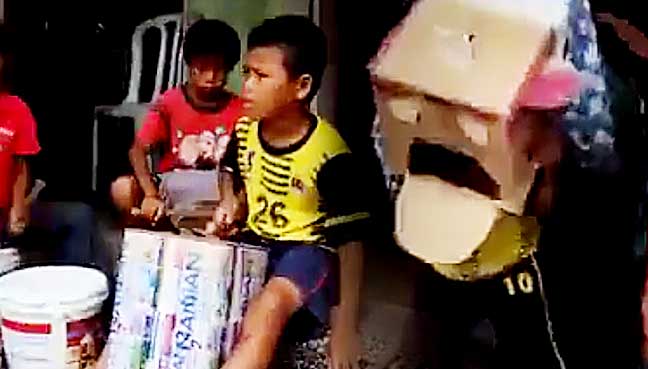 Without mentioning names, we can think of two things, and it’s to do with Malaysia’s long journey towards cultural unity.

FIRST, is that unlike many ads that portray a version of Malaysians that seems almost too good to be true, we instinctively know that these kids aren’t part of a marketing campaign (please please don’t be wrong!), but just a bunch of kids from various ethnic backgrounds not giving a crap and having fun with another race’s culture.

And SECOND, most CNY ads that portray unity usually do it about things that happened in the past, as if Malaysia’s union no longer exists. To be fair to advertising agencies, we’re not entirely sure what we’d think of a sweet, schmaltzy unity ad based in current day (although this BSN ad did it pretty well). However, already knowing that these kid’s lion dance is sincere, we can now take comfort that unity isn’t even an issue today and right now, when it comes to these kids from East Malaysia.

Happy CNY Malaysia! Let’s show these kids we can do it too :*)

PS: If you have any more info on these kids, we’d LOVE to know. Let us know in the comments!

Share this article:
NAH, BACA:
KLPAC ran a play on election night... and the audience reaction was pretty wild