Did ugaiz know that faking MCs is a CRIME?? Not IC – MC – as in medical cert/chit. Well we didn’t know either, until we saw this article where MACC announced that faking MCs could.land.you.in.JAIL. for 20 years!

Here’s the Malaysian Anti-Corruption Act which the MACC was referring to. Section 18 talks about the deed itself: which is giving your boss any receipt, account or document (ie. MCs), that’s fake. Section 24 talks about the punishment: which is a jail term of not more than 20 years. And like a cherry on top of the punishment cake, it comes with a FINE… of 5x the value of the fake document, or RM10,000, whichever is HIGHER!! You’re supposed to pay the higher one.

If you weren’t really sick before, this’ll definitely get you hospitalised in a coma.

WOW, doesn’t it sound extreme to send someone to jail for faking an MC? So we spoke to New Sin Yew, lawyer with Bon Advocates, to help us break down the lawyerspeak. He represented Malaysiakini when they got raided in Nov 2015.

But chup, before we go into the laws and legality of it, how common is faking MCs in Malaysia?

Have any of ugaiz faked an MC before? Go on, it’s anonymous anyways. 😛

So if you answered YES, you are among friends (not CILISOS, we very good wan, never fake MC 😛 ). But celebrities have admitted doing it and they totes shared their ponteng kerja excuses with CILISOS for World Cup season. Even Khairy’s done it too (sort of).

But seriously tho, according to JobStreet.com’s survey, MORE THAN 57% of bosses had staff who pretended to be sick to get MCs.

The top 3 reasons why employees pretend to be sick is because they got ‘no mood’ to work, feel burned out, or because they needed to go for other job interviews. But what’s interesting is the bosses’ actions… they all answered that they either gave verbal warnings, issued warning letter, and poor performance appraisals. No one said they prosecuted their employees.

So yep, faking MCs are pretty common in Malaysia, more common than the common cold itself (just kidding!). Can get from dodgy clinics. Image from Astro Awani

In fact, it’s so bad that Malaysian employers lose RM8 billion annually in overtime payment to workers replacing those on MC, according to the Malaysia Employers Federation (MEF).

“There are some cases that we know of employees have been certified as sick and is given medical leave from doctors. But these employees, instead of resting at home, they do other jobs like selling nasi lemak, pisang goreng and so on.” – Datuk Shamsuddin told Astro Awani

To demonstrate just how easy it is to buy a fake MC, The Malay Mail Online sent reporters to do a bit of undercover work. 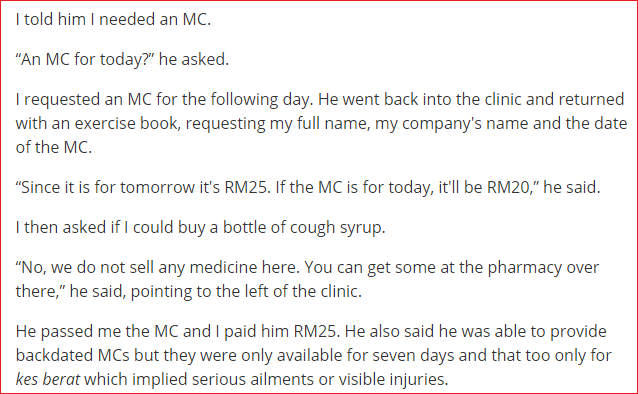 The reporters were quoted these prices, to buy a same-day MC it’s RM20, for next-day it’s RM25, backdated MCs cost RM40 each day. And the ‘clinic’ doesn’t even sell medicine. Shucks, it’s that easy!

So how many employees kena punished 20 years jail so far?

We asked Sin Yew about the rate of charging people who’ve faked MCs coz it’s strange, we never knew about this law before. It’s certainly not stated in CILISOS’ employment letter. Is it common knowledge to you guys? Let us know in the comments. 😕 So the answer is = probably ZERO.

We didn’t find any Malaysian who has ever been jailed 20 years, or even 1 day, for faking an MC. Let us know if you’ve come across it before.

“I don’t think faking an MC is something someone should go to prison for. To be honest, I don’t think Section 18 is meant to be used in those circumstances. That wasn’t the intention of Parliament.” – Sin Yew

To be honest, we also couldn’t believe that Parliament just sat there one day and decided to catch all the employees who fake MCs. Before we breathed a sigh of relief, we asked the lawyer why. When you read an Act of Parliament, the WORDS used are very important. Section 18 of the Act (here’s the link again) uses the words: ‘receipt, account or other document’. “One may argue that ‘other document’ covers EVERY document under the sun, but you must construe the meaning of the word in its context,” he told us.

And the context here would be LIMITED to the same family as ‘receipts‘ and ‘accounts‘. Like invoices, purchase orders, or anything involves a TRANSACTION. So what’s MC got to do, got to do with it? To suggest that it includes MC is a bit of a far stretch in Sin Yew’s opinion. Tak same gang. YOU CAN’T SIT WITH US.

So you’ll probably only get fired, but going to jail is an unlikely outcome for faking an MC la.

There’s this principal in criminology, Sin Yew adds… There are offences that’re inherently wrong (murder, rape, robbery and theft). Then there are those which are wrong, simply because they’re prohibited (ie. submitting fake MC). There’s nothing inherently evil about it.

“If that’s how MACC interprets it, I beg to differ. Ultimately the court has to decide. It’s safer to drink a bottle of Listerine and actually fall sick. The punishment sounds crazy. No judge in their right mind would imprison anybody up to 20 years because they faked an MC.” – Sin Yew

Having said that, why risk it just to skip work for 1 day?

“It would really damage your career prospects if you have jail time. Unless you are Robert Downey Jr. Or decide to be a rapper, where jail time is a mandatory nowadays.” – Sin Yew

Ehh, what about doctors who sell fake MCs? We found out that for doctors, the authorities take things more seriously. They could lose their license to practise, aaand could apparently be prosecuted under the same Sect 18 of the Act….also announced by MACC (on May 2014).

In this announcement however, people reportedly did face the consequences: “MACC has taken action against several doctors who had issued fake MCs to workers that were not sick and had paid for it,” said Datuk Mustafar Ali, its Director of Investigations.

Over here, doctors are registered to practise medicine by the Malaysian Medical Council (MMC), so likewise it has the right to revoke their license la. At the same time, because it is the governing body, it can regulate MCs and make sure doctors don’t issue fake ones any more. How? By putting their MMC chop with the doctor’s registration number on each copy. Anyway, the Health Ministry has made it a requirement.

“The public can access the database via MMC’s website and conduct their own verification by comparing the doctor’s particulars as stated in the MC against what is recorded in the medical register. With the information, it will be much easier for employers to verify if an MC is bona fide or otherwise.” – Datuk Dr. Jeyaindran Sinnadurai, Health Ministry Deputy Director-General, The Malay Mail Online

Ok, so you may not go to jail, BUUT faking an MC is not right It doesn’t change the fact that it’s unethical and you’re cheating your boss, Sin Yew reminded us. Without his reminder also, we asked ourselves… is playing truant really doing us any favours?

Malaysia has a reputation of being a lazy country (well we found stats, but they were in terms of laziness in exercising). Singaporeans who work here have commented on Malaysians’ work attitude in forums. If we keep doing this, it’ll affect foreigners wanting to invest as former German ambassador to Malaysia Dr. Guenter Georg Gruber pointed out.

What more with the current economic downturn, we should do our part to work hard and boost it up again.

Maybe you don’t love your job, but there are people you love. So you get up and go to work every day, to provide for them. Don’t throw it all away on a fake MC

Even if you don’t have anyone to do it for, do it for Malaysia.