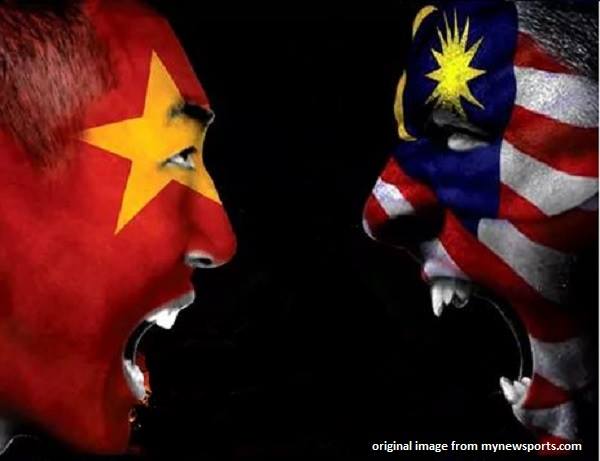 About a week ago, we were singing along to #KeeperKatMana after winning 1-3 against Singapore. Last Sunday, we ate a hearty serving of humble pie when we lost 1-2 to Vietnam in our home ground. But unlike the Singaporeans who accepted their defeat (and thrown a coupla insults at us), some of us got angry. RIDICULOUSLY angry to the point that we whacking up Vietnamese fans, men and women alike!

The next day, we woke up to angry posts on Facebook – it’s not that people were upset with our tigers’ performance, people were upset over the pathetic lack of control and civility of several local fans. “This isn’t sportsmanship!” “You bring shame to Malaysia!” “You make us look like sore losers!”

As we stood mortified by what our fellow rakyat did, two Vietnamese fans – one who suffered a hit and the other bullied by locals – shared their side of the story with CILISOS.

Here’s how it happened…

University student An Vu Nguyen was one of the victims of last Sunday’s hooliganism. An (fifth from left) with fellow Vietnamese and Malaysian fans

“When we arrived at the stadium, the atmosphere was very friendly and fun with people taking photos. We went in early to get our seats. Everything went well throughout the game, but the fight started when Malaysia’s captain punched a Vietnamese player. (Watch the video, 0:55 onwards) No red card was given, so we started booing.

At that point, someone suddenly hit me hard. I’m not sure what it was, a plastic bag with ice or a bottle. I was too stunned to tell. One of my friends shielded me until I could get up, then we ran to two police officers at the scene.

Then, we went to the central area where all the police were so that we could get some protection. The cops told us to wait until more people had gone back. I could actually feel the fear from the cops. We waited for 3 long hours before leaving. 2 police officers escorted us out of the stadium and we only reached our car at 1am.” – An Vu Nguyen

Another fan, Vu Minh Ngoc, shares his experience with us too: “Everyone was quite friendly before the match, but things took a terrible turn when Malaysian fans started entering the Vietnamese area to assault some of us. Some of my friends, who wore the iconic red t-shirt with a yellow star, were harassed even outside the stadium.

Thankfully, we had a security team which helped stop the fights and to stop more Malaysians from coming into our area. However, some of them just stood and stared… I don’t really blame them because they were afraid themselves.

As we stayed back in the stadium, fearing for our safety, we finally managed to get out. We tried to look for a taxi, but nobody wanted to send us home even if they had no passengers. We had to walk 2 hours on the highway because of that. We walked towards the Batu Tinggi KTM and reached at 12am… There, we finally found a cab back to our place in Jalan Semantan at RM60.” – Vu Minh Ngoc

Here’s the video of the incident if you haven’t seen it.

Despite being harassed, they don’t hold it against us…

.. and that makes us feel even guiltier than before. Even through being hit and mistreated, harassed and bullied, An and Vu still recognise Malaysians as the warm, kind people we all try our best to be. “Malaysians are kind,” An said despite being hit without warning. “When the news broke out, I had friends who texted me to apologise on behalf of the hooligans. Not everyone is like these hooligans.”

However, not everyone may share this sentiment… especially those who may not have experienced life in Malaysia. “The Vietnamese community back home is very disappointed. I’m afraid that our locals would be angry at Malaysians when they play the second-leg in Hanoi, but I hope things take a positive turn.”

Surprising enough, Vu even has something positive to say about our local fans. He was particularly impressed with Ultra Malaya’s passion and spirit. FYI, Ultra Malaya is a group of local fans notoriously known for their bold, sometimes rebellious behaviour. “The cheers, the intense enthusiasm, the obsession… Ultra Malaya truly left a mark on me. I hope that they’ll be there in Hanoi to support the Malaysian team. Hopefully our Vietnamese fans would learn a thing or two from them.” Ultras Malaya in another game. Photo from oppamama1.blogspot.com

On the other side of the stand, local fan Geoffrey Yeow tells CILISOS that he was saddened by what he saw. “I could clearly see that the Vietnamese fans were very well-behaved, sitting in their area doing their own thing. They didn’t do anything to instigate the fight.” From past experiences and by reading the compassionate comments by the Viets, he adds that they were generally very nice people. “Should the tables turn, we Malaysians may not be as forgiving.”

However, despite the apologies of KJ and other Malaysians, Geoffrey’s not sure if he’ll be going to Hanoi for the next game this Thursday thanks to the irresponsible behaviour of the hooligans.

“It wasn’t easy to get these tickets but I’m probably going to pass this time. I’m concerned for my safety, just in case something unwanted happens. It really shouldn’t have to be this way, though. They did nothing wrong and didn’t deserve to be assaulted.” – Geoffrey Yeow

Why play football also must fight until like that?

Whether it’s for national pride or ownself ka cheng chien (butt hurt in Hokkien), it’s common knowledge that hooliganism and football come hand-in-hand like sambal in nasi lemak. Gotta have that heat.

About 79 people died in the 2012 Port Said riot in Egypt. Photo from oddculture.com

In Malaysia, state fights usually see a lot more tension between the fans. On a national level, not so much ’cause everyone is rooting for one country. The Ultras Malaya is especially famous, so go read up about what they did at the Malaysia vs Philippines friendly that happened in May 2014 in this enlightening, transparent piece by FourFourTwo here. Or, watch this video. (Good luck getting ‘FAM bangsat’ out of your head!)

Now, the Ultras were there at the game on Sunday, but as it turns out, they were actually pretty decent. “The Ultras were very well-behaved. Yes there were illegal flares and all, but the Ultras were continuously chanting cheers for the team. I didn’t see them throwing bottles or hitting people,” Geoff adds.

On the other hand, the Inter Johor Firms (IJF), another notorious hooligan gang, was in the crowd. Two alleged IJF memberswere identified as some of the guys who assaulted the Viets. It didn’t take long for the authorities to disband the group and bar them from entering stadiums.

Malaysian football has had its glory days – those were the days of Supermokh and Dollah Salleh – but as corruption scandals went up, our morales went down. Hasimi Muhamad of Malaysian Digest writes that although we’ve had some reliable players in our time, the success in our football scene seems shortlived “because of the culture of gangsterism, or better known as ‘hooliganism'” which has found its way into the local sports scene. Read more about his story on Malaysia’s hooliganism history here.

Eradicating hooliganism from football may be challenging, but not impossible.

The football scene in England used to be violent, but it’s a lot more mellow in recent times. At least that’s how it feels, coming from Geoff, who watched a few matches in London and came out without a scratch. He adds that theres’ always a huge police presence and CCTVs all around.

“Alcohol is allowed in the stadium, so most fans carry a beer in their hand. They’re always chanting and cheering, swearing a lot too, but no violence. I also see children around, so it sometimes feels like a family event.” – Geoffrey Yeow

If they can do it, so can we, right? As Khairy apologised to the Vietnamese yesterday, he adds that the Football Association of Malaysia (FAM) should “ban supporters with previous records from entering the stadium” and “stern actions should be taken by police against the group”. CSKA Moscow and Man City had to play to an empty stadium recently. It was punishment to CSKA fans who were being racist and all. Photo from dailymail.co.uk

Besides, what good is the motto “Majulah Sukan Untuk Negara” if we won’t majukan diri in the first place?

Here’s hoping that Malaysia learns a very embarrassing lesson that will hopefully last us a lifetime, and that our boys will do their best in Hanoi to get to the finals.

Cos seriously, we want this to happen again: Interviews with Vietnamese fans and various research conducted by Johannen Sim, CILISOS intern. Yes we have an intern! #cilisoslevelup

Share this article:
NAH, BACA:
5 Reasons Why Jose Mourinho is the Khairy Jamaluddin of the EPL