That’s all, folks. The World Cup’s runneth over. Come and gone. Now it’s time for those of you who invested so much time in watching 22 grown men chase a leather sphere to make it up to the people who weren’t remotely caught up with this bola sepak BS. This way to redemption, fellas…

First things first, you need to get reacquainted with the bed that you’ve barely slept in since the World Cup kicked off. Those 12am and 4am matches interrupt sleeping patterns which of course, lead to tiredness, lethargy and a chronic case of the yawns. Medical research has shown evidence of links between chronically not getting enough sleep and increased stroke risk. A 2012 study showed that people who had less than six hours sleep a night had a 4.5 times increased risk of stroke symptoms, compared with people who got seven to eight hours of rest nightly. In some severe cases, sleep deprivation has even lead to deaths of some overly committed football fans.

So go ahead and hit that snooze button, cos you’ll need to be rested for what comes next on the list.

Malaysians have never been the most productive of employees. Long teh breaks, unnecessary overtime claims and social media squatting have seen our productivity levels pale in comparison to the U.S., U.K., Hong Kong, Japan and begrudgingly, Singapore. The Malaysian Productivity Corporation (not ironic), lists the average Malaysian’s employee’s productivity at RM44k a year, compared to American workers with a productivity level of RM286k a year, followed by employees in Japan (RM230k) and Hong Kong ( RM201k).

“So tell me, Jose; should I bet on Argentina or Germany?” Photo from nst.com

As a result of the World Cup, football fans in Malaysia who are mostly employed in the private sector (6.5 million) would form a large portion of the sleep deprived. It’s statistically proven that your productivity dived, much like Arjen Robben, throughout the month. The Malaysian Employers Federation estimates that RM8 billion of productivity losses are incurred a year on account of fake medical leaves. That works up to roughly RM666 million of losses a month, which would undoubtedly be higher in a World Cup period.

Besides the obvious productivity killers like medical leaves, there’s also the issue of tardiness. Late nights watching the footie make it difficult to get out of bed in the morning, even if your team won. So what amounts of productivity loss are we talking here? You’d be surprised. In a hypothetical small company of 30 people with an estimated two hours of tardiness per employee, there would be a total of 528 lost hours (over 22 working days) that will cost RM11,500. 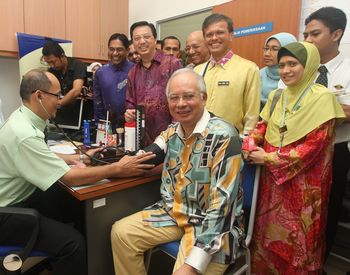 So now you have a rough idea of our productivity levels (or lack thereof) were like over the past month. Cos c’mon, you know you weren’t really at work for the whole of June. Sure, you were there in body but your mind was in Menaus or the Maracana. And after a month of doing your best zombie impression at the office, it’s time to get back in the good graces of your boss (who is equally as football-hungover as you but he can get away with it).

Ergo, now’s the time to make amends. Put your nose to the grind and show some initiative. Come up with a well thought and researched business proposal. A plan to increase efficiency and reduce wastage. Basically anything that equates to “less time, more money” as corporations are so fond of emphasising. Not only will your boss be impressed, you’ll also get a leg up on your colleagues who are still trying to shift into second gear.

NAH, BACA:
Why Malaysians shouldn't complain when the SMART tunnel closes due to heavy rain

3. Suck Up To Significant Other

While there isn’t any conclusive evidence to prove that divorce rates increase during a World Cup period, it’s safe to say that marital or relationship tensions would run high. If you’re overly optimistic, you could even point to some skewed statistics on how the World Cup was good for your relationship. But realistically, you know you have your work cut out for you, hombre. So let’s face it; you’re in the doghouse now. Your girlfriend/wife/mistress/boyfriend is carrying a major grudge for your disappearing act in June. Normally, you would have picked up on the cold shoulder or withdrawal of partnership benefits but the football numbed your senses to this. Now that you’re back to your regularly scheduled programming, there’s some restitution to be done. Put in some serious face time. Listen to her talk. Watch her favourite show together. Take her out to dinner. It’s megasale season too, so be ready to drop some dollars if you want her to drop them drawers, ahem. After all, what’s a few weeks of quality time with your one and only after spending a month cheering on a team of footballers who don’t know you exist? Although you found it hard to believe at first, there are indeed some of your friends who are not into football and their only inkling of the World Cup is a mug with a map of the world printed on it. So yes, you have to take one for the team and strengthen those friendship ties once more by manner of some sacrifice; money, time and effort.

Buy your friends a round of drinks. Indulge in your shared hobbies together. Be your bro’s wingman at your usual fengtau joint. You owe it to them. And speaking of owing…

Bet you made a fair few wagers on a few World Cup matches, didn’t you? Betting on World Cup results has steadily risen with each passing tournament that even our local Five-O have set up to apprehend and arrest any enterprising individuals who have the slightest links to betting and gambling.

PDRM conducted 217 raids nationwide during the 2010 South Africa World Cup and made 143 arrests. The syndicates they clamped down on had received bets amounting to RM438 million. A higher betting value is to be expected in this year’s edition. If you managed to escape the clutches of beloved Home Minister Datuk Seri Ahmad Zahid’s taskforce, you might not be so fortunate to elude the bookies, who are surely more efficient in their efforts to ensnare debt welchers.

Unless you had the foresight to bet big on Germany in their epic slaughtering of hosts Brazil, chances are you might be in a little bit of a banking bind. (Pardon the sneaky Singapoke!) 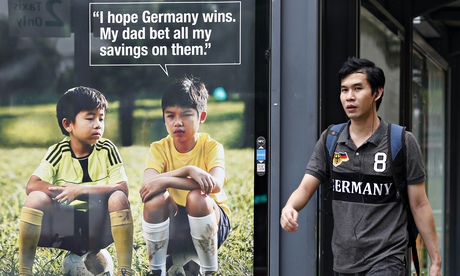 Time to get a part-time job that can generate some side income and keep the bookies from bathing your residence with red paint reminder. Might we suggest opening a stall at the Ramadan bazaar?  The Mikro-i Bazar Ramadan scheme has an allocation of RM45 million to help small time businesses and traders during the Ramadan month, which maxes out at an approximate capital of RM3000 per applicant. Cilisos Public Service Announcement: Friendly wagers and bets among buddies are part of the fun of the World Cup but betting your savings on the outcome of a game is not something we advocate in the slightest. Because the house always wins. And you’ll be left without one.