A big part of the campaign was their 175-feet long mural in Masjid Jamek with an explosion of local motifs, all of which took 8 artists and 10 days weeks to complete. And if you need an agakration of just how long it is…. In fact, given ANY sort of visual element… Malaysians sure go nuts – like all those Thor memes? So of course for TM, we did a contest callout, asking ugaiz to send us your most ‘mengada’ poses with murals. (BTW, if you’re a foreigner wondering what ‘mengada‘ means, it’s sorta like pleasantly nonsensical. Kinda.)

Although we got a lot of shy-shy ones, here are our 10 favourite mengada mural poses as voted and awarded by the CILISOS team

PS: Congrats to the winners who won – a SanDisk micro SD card with a roti canai-flippin’ storage size of 128GB (worth RM220)! Faster go say #tenkiuTM, or check out their internet packages here ^_^ By Pang Jo Khang, in Penang

If there’s anything more prevalent than a Malaysian’s love for food, it’s throwing things. Seriously, we got like SO many entries of people throwing things, specifically at this popular Ernest Zacharevic mural in Penang…. AMAGAD Y UGAIZ SO JAHAT ONE?!! No wonder la they wanna cabut.

But on another note, there have been others who have actually tried to hurt this mural since it was first painted in 2012. “You all eat full-full edy, got nothing to do ah?”

It’s been vandalised a few times (including the #4.0 spray paint), but kind Malaysians have always came to its rescue. 🙂 But with that said, there’s also the………. 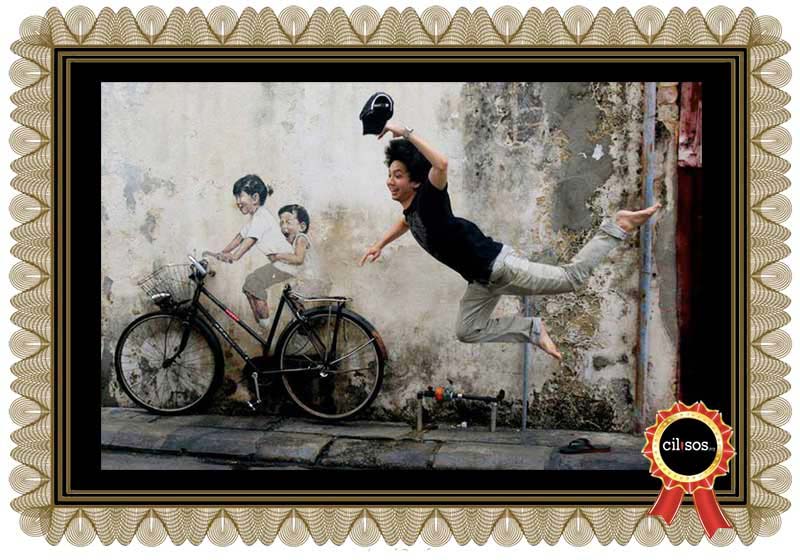 Some Malaysians are so dedicated to their work of art, they won’t even mind busting a knee. Khair, if you’re reading this, please comment below and tell us how that fall ended. :-/

You can find these children and throw more things at them (hopefully all of them being teddy bears or kind words) on Armenian Street in Penang. By Jason Lee, in Penang

Firstly…. why is Bruce Lee giving a cat a flying kick?! Ernest Zacharevic Y U NO LOVE TEH KITTEHS?!

PSYCHE! It’s not Ernest’s work, but the work of ASA (Artists for Stray Animals) in 2013. And the artists behind it are our very own Tang Yeok Khang and Louise Low, as well as Thai artist Natthaton Muangkliang.

An initiative by LASSie (Langkawi Animal Shelter and Sanctuary Foundation), a non-profit to care and rehabilitate neglected and abused animals, the “101 Lost Kittens” features 12 murals and installations all across Penang’s backlanes. The campaign wants to make us more aware of the plight of stray animals, encouraging the community to spay and neuter their own pets or adopt other furkids around town. Check out there other 11 cats here – you won’t regret it. 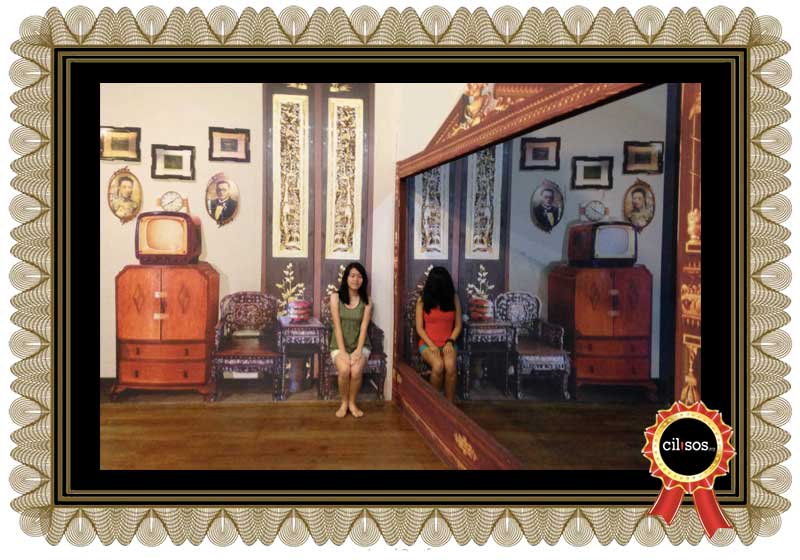 Yea we know what you’re thinking. This one not mural what??? But according to Merriam Webster, a mural is defined as “a usually large painting that is done directly on the surface of a wall”. Hmm…. ok la, can jalan.

If you didn’t know, Malaysians also have a thing for spooky stuff. Hantu, toyol, pontianak, semua kita kasi sapu. So without a doubt, this creepy shot is so creepy it makes our Halloween horror movie story look as scary as this: Imma terrorize you with my cuteness. Photo from zooborns.com

We’re actually not quite sure if this Peranakan shot was supposed to be creepy, but Rachel kinda nailed it. If you didn’t know, this is also a familiar sight in the Made in Penang Interactive 3D Museum (the ‘Trick Art’ section) in Penang. Apart form a bucket load of mind-blowing 3D trick murals, they’ve also got like a gazillion more artwork combining heritage and pop culture. Check out more photos here, they’re so freaking cool.

NAH, BACA:
The Chinese gold miner who became Sarawak's Rajah for a day Also taken in the same museum, here’s a shot of someone with very big bebolas. Dude, don’t you know what happens in The Ring? Or any other show with long-haired, cannot-see-face woman wearing baju putih?! Well… let’s just hope that person Hamzah’s kacauing is Vanessa Hudgens halfway rebonding her hair. 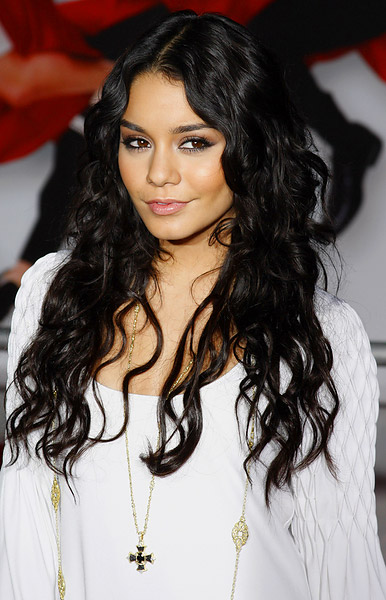 “Zah… u panggil I ke?” Photo taken from shoppinglifestyle.com

For mobile users, you gotta zoom in on this one la. This fler dem power. So powers that this guy seriously deserves an award on his own. Not only did he send in FOUR shots, he even added witty captions to them. Colaz: you brightened our day as much as your shorts would brighten any room.

So… where are these murals from anyway? They don’t look iconic oso. Well if you didn’t know, these were taken at Artsphere 20/8ty in Sri Kembangan, KL. Huh, art what ar? Well it’s basically a commercial area with 80 murals painted by 20 artist, and by the looks of it, the place seems kinda new. Call it a cheapskate gimmick if you will, but we’ll take that over another dingy wall plastered with ubat lelaki kuat ads 😛 PSYCH! It’s another trick 3D mural taken at the Made in Penang Interactive 3D Museum, but of course ugaiz were smart enough to know it. 🙂 Still, we can’t get over the fact that this looked super real… until you flip the picture……. 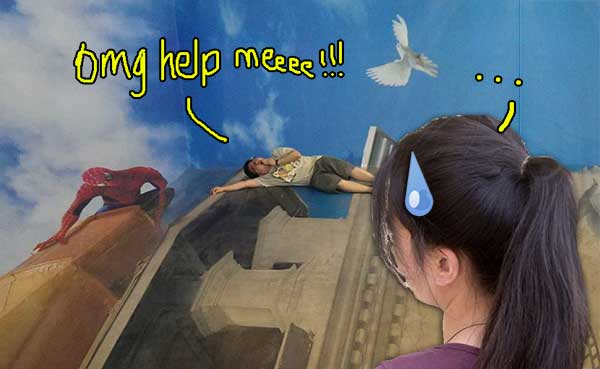 …. and that, our dear readers, is why it’s called the Rajinikanth award. One more shot taken at the Made in Penang Interactive 3D Museum, here’s a bebola-besar Hayden going skydiving without any safety equipment. Ok la, at least he’s got glasses on… and probably really strong back muscles too. By Jona Saimin, in Penang

And with that, we’re back to on-the-street murals! err…. Jona…. offer sweet first can onot?

However, this street mural located off Chulia Street Ghaut in Penang was done by Louis Gan, born deaf-mute Malaysian who never went for art classes, but picked up drawing skills through videos. He’s got a few more artwork done which you can check out here. PSYCH, again! That’s not Chin Peng, yo. That’s an innocent ah pek drinking kopi from a kopitiam cup in Ipoh 🙂 Painted by Ernest himself, this piece of art ruffled some feathers when some fler likened his face to Chin Peng. But don’t think he’s pissed at the claim tho, since his son said that the entire family burst into laughter when they heard about it. Ernest had actually met this uncle in a coffee shop on Carnarvon Street in Penang, and had taken interest in him then. See la, all these fellers so berdrama…. mengada betul…. 😛

The last three years haven’t been the easiest for Malaysians, and sometimes, laughter really IS one of the best ways to connect with fellow Malaysians. At least from this angle, what TM wants you to know is that the internet really has changed the way we live… and laugh 🙂

Without a connection, we wouldn’t be able to bring you this totally silly post, a thought-provoking story, and of course the thing that connects us all together….