If you’ve been on social media lately, you might have seen ALOT of people complaining about the state of Malaysia. But often the question is… who are they complaining to? This was about a monkey who was shot and run over by some big…um…shot. 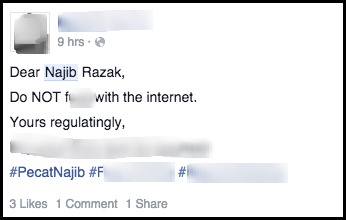 This is about PM Najib’s plan to regulate the internet to prevent criminal defamation. Click to read story.

BUT WAIT – before we start talking about MPs and the whys and hows we should write to them, let’s take a quick poll:

The reason why we’re bringing this up is because we get the feeling that most Malaysians are only familiar with their MP (aka Member of Parliament) as far as the face on the posters during election time, or as the person who says things to newspapers. “Who is this MP person ah? Why he so knowledge wan?” – Screencapped from Facebook.

However, your involvement with your MP should go a little further than that since, by voting for him or her, you’ve effectively said “Oraite, I think you’re the best person to represent my views and best interests as a citizen”.

And if you didn’t vote for this person then this is the perfect opportunity for them to prove their worth, right?  😈

Confused? Don’t worry, we got your back bro.

Difference between an MP and ADUN

Sidetrack a little bit ya, cause we feel that it’s important to know that a Member of Parliament and a member of the State Assembly are two different-but-interrelated things. This chart explains the interactions: Too many words? Don’t worry.

Why you need to communicate with your MP So with all the social and political problems we’re facing, one of the ways you can try initiating a change is by making your MP aware of what your stand is. Here’s what an MP can do in parliament:

As mentioned, your MP represents your views and best interests, but they’re not gonna know what these are if you don’t tell them. We know we said “write to your MP” in the title, but what we actually mean is to communicate with them. There are a few different ways to do this – you could… Unedited image from The Current.

According to Sue Ann, a representative – whether Parliament or ADUN – has a lot on their plate so any of the options above is more likely to be filtered through a personal assistant or the office staff who’ll either submit a summarized report to the representative, or pass the actual letter itself if it’s important enough.

This means that the letters DO get read regardless, but it just depends on who ends up reading it. But you might increase your chances of it directly reaching the representative with a well-written letter. How to write an effective letter to your MP

A letter should be straight to the point, easy to read, and personal. Email and snail mail are for the most part accepted these days so it’s more a matter of preference.

Here’s a sample of what an email to the MP should include, sourced from the Citizens of Public Justice guide. Do note that we made content of the letter up.

<Your reason for writing the letter> I am writing concerning the proposed development of the PJ – Cheras highway that will start in early 2016. The news that the Taman Hometown park will be demolished to accommodate this new highway is upsetting to me and many residents of Taman Hometown.

<Your personal experience which with the issue> I have lived in the Taman Hometown area for the past 15 years and the park has become a personal landmark for many residents. It’s a meeting point for senior citizens as well as a popular place for young families and their children to play and exercise. The park is also the last green lung in the area and home to small wildlife such as monkeys and wild boars, so it is a shame for residents to lose their last connection to nature within the city.

<Include a clear request> Your party has previously spoken against the development of this highway, and I hope you will join them in opposing this project.

<Thank the MP (optional), ask questions, request a response> I also want to thank you for your commitment and dedication to the Hometown Jaya constituency so far. What is your personal stand regarding this development? What steps will you or your party be taking to prevent this development? A reply to these key questions will be highly appreciated.

So now you have the tools to write an awesome butt-kicking letter that any personal assistant will hand deliver to the MP without a second thought. Awesome! Good job! But wait a sec…. Don’t worry, we gotcha covered for that too.

Before, you’d probably have to either rely on Google for the information, wade through our gomen portals (which is not very fun), or call their offices directly to get the info.

But thanks to the awesome people at Sinar Project and UndiMsia, all information on EVERY MP IN MALAYSIA is now consolidated in a single site called MyMP. The site allows you to check by name or constituency or simply just search by name. It also includes biographical information, social media, and current headlines and/or videos mentioning them.

Disclaimer: Sinar Project clarified that some info might be missing as politicians may not have responded to their queries or have the info up anywhere. Also, the official addresses of incomplete politicians taken from parliament site may actually bounce. If it does please contact UndiMsia for them to follow up.

Partial screencap from an MP’s page on MyMP. Click to head to main site.

We heard they’re also planning on including ADUNs sometime in the near future but for now you’ll still have to rely on Google because the official gomen website for ADUN contacts has dead links, such as for the state of Selangor -.-

EDIT: The list of Selangor ADUNs can be found on the official Dewan Negeri Selangor homepage, but it still points to the fact that our official gomen websites need updating. (Thanks for the tip, Azira!)

There you go. All the tools you need to get in touch with your MP, so… We really can’t emphasize this part enough: Your MP is the direct link between you and the creation and passing of laws and legislations that, in the end, affects you.

Sure, you can argue that an MP might be more loyal to the party than to the people he or she represents, but think about it this way:

If you were an MP who votes in support of the construction of a new highway despite hundreds of letters, phone calls, and even protests opposing it, you not scared you won’t get re-elected next term ah?

So much like the conclusions reached in our article about Bersih 4.0, the chances of your correspondence directly resulting in change is pretty slim; but it does help in instigating such changes by showing them which way the voters are swinging.

Oh, and by the way, the parliament is currently the most direct democratic way to get PM Najib to step down via a vote of no confidence, which can only be achieved if a majority of MPs support it. So maybe you can write to them about that.

To support PM Najib of course. Because we love our PM.