After last weekend’s rally, there must be one obvious burning question on everyone’s (except those who know Chinese) minds.

Why were there so many chickens? KFC, animated ayams and shrilling chickens (those noisy rubber chickens) could be seen on banners and signs and as props. But how are chickens connected to Bersih?

CILISOS BREAKING NEWS: The chicken is actually a representation of PM Najib. The obvious thing to say is that the peepur at Bersih were describing Najib as being chicken but no! In Mandarin, the phrase ‘nah jī’  literally translates to ‘that chicken’. Coincidentally, ‘nah jī’ also sounds similiar to name Najib.

Therefore, Najib = chicken. It’s in the name, not his personality yo. Who doesn’t love a good pun amirite? 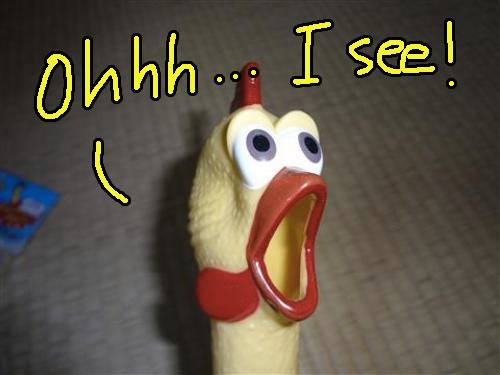 Anyway, we had some awesome pictures from BERSIH 4.0 that we wanted to share, but (and it’s kind of an ongoing joke in the CILISOS office) our buddies at SAYS.com beat us to it! Nahhhh…. (Our editor won’t let us get away with that :sadface: )

We just removed the pictures SAYS.com did already lo..

Sooo….after scouring Facebook, Twitter, Instagram and kacau-ing our friends to send us pictures, here are the 18 gambars of banners and props that SAYS.com didn’t cover. :PPP

Disclaimer: Because we found most of the pictures on social media sites, we didn’t credit the original sources to jaga identity of those who took the pictures. If you would like us to credit you, please let us know (and that goes for our feature image too)!

Also to the people at SAYS.com, our intention here isn’t to say our stuff is better la. We’re just complementing your work heh. (And also cos the writers actually dowan to involve ugaiz but our cheeky editor pays our salaries, how to fight?? #tangkapChak)

1. Who needs a banner when you have this? Such apt. Much efficient. Very awesome.

2. Some Malaysian superheroes showed up as well 3. But one superhero couldn’t show up because he had to go isi minyak We’re not entirely sure if this guy intended to go for BERSIH 4.0, but we came across the picture using #bersih4 so close enough! Why so many people taking picture??? Like all we see is a yellow motorbike with the number plate PMC 1841. It’s like that other time when we talked about the band from Japan called Kanina. Dunno why so many people laughing ler. *Cue Australian accent* Here we see the Najibus in it’s naetural habitat. Ay magnificent and gentle creatcha, it’s been hunted to the breenk of exteenction.  It’s so gentle that you cuuuld just walk up to it and take a picta of it.

*Sorry if we didn’t properly depict the Australian accent. We’re not actually from Australia.* So cute la the poster. We wished the polis would have seen this. Maybe they would’ve changed their minds on questioning the organizers of Bersih 4.0 (then again they let us rally peacefully so mebe they did see this la).

8. The dudes that aired the gomen’s dirty laundry Can ask your Chinese friends to translate lor. But if ugaiz are lazy, the banner basically says some not very nice things (something about a hippo). And no, we do not know where they got the underwear.

NAH, BACA:
The story of an Interpol fugitive from Indonesia who may have a role in the 1MDB scandal We were glad those present at the #TangkapNajib protest did not think of this first. Things could’ve been much, much worse.

10. This woman who did marketing right You gotta admit, you would have bought something from her la. In fact, there were many, very nice people just like her who set up shop there so protesters dun have to walk too far to get a drink!  😀

Other gerai owners also joined in the fun as well, check them out below. 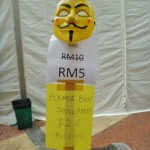 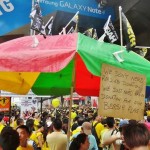 We tried to Google GRUPA but nothing came up! So whoever this GRUPA person is, we just wanna say that’s some pretty cool art right there.
Update (3/9/15): A CILISOS reader informed us that GRUPA has a Facebook page! GRUPA actually stands for Grafik Rebel Untuk Protes & Aktivisme.

12. This group of people searching for the missing RM2.6bil This people should start a comedy sketch show la. We hope this bomoh doesn’t sue them for copyright.

13. This group that tried to do an impersonation of Abbey Road Yes yes we know they’re not actually walking like The Beatles were but that was the first thing that came to our minds la. Got resemblance la right??

14. One of the more unique Bersih t-shirt designs 15. This girl explaining the relationship between Najib and Malaysia For those thinking of breaking up with their significant other, this is a creative way to go about it? Just replace Najib’s name with your boyfriend or girlfriend.

Erm, let us know how it goes ya.

16. The dude that got his priorities straight Though not everyone may agree with the 2nd part, at least this dude had the guts to ask la. No harm in trying right?

17. The prop that let you exercise This one kinda deep la. It’s like you hit that inflatable punching bag and try your best to hit the ‘RAKYAT MISKIN’ on the floor. And once you achieve that, you realise that it’s actually an analogy of real life!  😯

18. The team that believed laughter is truly the best medicine It’s safe to say that the only shots the medical team got were from cameras. Check out the dude in the cap pointing excitedly at the banner!

19. And that one epic Pokemon battle Seriously, if you haven’t seen the video GO WATCH IT! It’s a pretty darn epic Pokemon battle between our PM and Tun M. But for those who have watched it, you see that red dot? It was blinking in real life. We saw. Yea that amazes us.

Sorry if you see us like Dug from Up now.

We were so amazed with the bakat terpendam of our rakyat! Not only was BERSIH 4.0 a rally, it was also an art exhibition. But the creativity continues even after Bersih 4.0 ended. We are proud to be first to introduce ‘The Emo Protester‘, the fella who meme-fied himself……….eh chup, SAYS.com already wrote about him. We think this guy should be promoted as much as possible. We lol-ed so hard. We were delighted to know that he has a photo album full of memes of himself! If you wanna laugh summore, click here and share his work.

But yea, if this is amount of creativity and awesomeness can be seen in BERSIH 4.0, we honestly can’t wait for BERSIH 5.0. (But let’s hope we won’t need a BERSIH 5.0.)

Kk enough with us. Now go check out SAYS.com’s top picks of the Bersih 4.0 signs here 🙂