[Update (18th July 2019): Oh, look! The opposition staged another walkout, this time in protest of the Speaker’s refusal to cite Lim Guan Eng for allegedly giving the wrong info about the GST refund issue.]

Earlier this week, 20 BN and PAS MPs staged a walkout from the Dewan Rakyat in protest over Deputy Speaker Nga Kor Ming’s ruling to suspend Tanjung Karang MP Noh Omar for 3 days. Because Noh allegedly said that Nga isn’t qualified to be the deputy speaker, after the latter allegedly said that the UMNO-PAS coalition would lead to a Taliban state. This recent walkout was not the only one, as some of us may still have the image of Khairy sitting alone in the BN side of the Parliament in our heads. With that in mind, we look at a few other times MPs staged a walkout from the Parliament.

1. When PAS wanted the Kelantan Menteri Besar to resign

Who: 13 Umno assembly members, one MCA The situation outside the Kelantan state assembly during the no-confidence motion. Image from sokmo.net

Many of us would have heard of the recent UMNO-PAS “marriage”, which is actually a reunion, as indicated in our previous article about the BN-PAS relationship. In fact, their first marriage was in 1972 when PAS joined the Alliance-run govt (BN version 1.0).

The Alliance Party and PAS had an agreement, where PAS would be in charge of Kelantan, with UMNO having a share in Kelantan’s govt without intervening. This however attracted strong objections from within PAS but it was eventually approved by the party. This led to PAS joining the coalition govt.

When BN became formally registered in 1974 and replaced the Alliance Party, UMNO allegedly broke its promise of non-interference in Kelantan, so things between UMNO and PAS in Kelantan started to turn sour faster that milk left out in the sun. Part of the problem was then-MB Mohamed Nasir’s alleged lack of cooperation with PAS, pushing PAS to call for him to resign in 1977, which he refused.

A “no-confidence” motion was then tabled in the Kelantan state assembly and was carried by 20 PAS votes, after 13 Umno and one MCA assembly members walked out in protest.

2. When PKR got their motion rejected by the Speaker Filing the motion. Image from The Star.

In light of the Sabah Progressive Party’s (SAPP) loss of confidence in then-PM Abdullah Ahmad Badawi in July 2008, PKR filed a motion of no-confidence against him because the country’s situation had worsened, especially for the poor. However, Speaker Pandikar had rejected the motion on grounds that the issue was already debated the month before. Wan Azizah then stood up and asked the Speaker to reconsider his decision but he still stuck to his guns.

“I do not even need to give a reason for rejecting a motion. I have read the motion and it asks for a resolution and that does not fall under Standing Order 18(1) in which it is filed under.” – said Pandikar.

After a heated moment of standing, shouting and hammering, the PKR MPs walked out since they weren’t given the chance to voice out on behalf of their supporters. Wan Azizah meanwhile also expressed disappointment over how the motion was dealt with.

3. When Anwar returned from his “hiatus” and clashed over a bill in Parliament 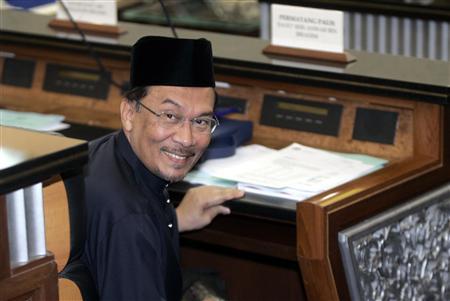 What up, ma peepols? Image from Reuters.

Ten years after Anwar got kicked out of office in 1998 in controversial circumstances, he made a comeback and garnered a lot of support from the then Opposition to kick BN out of power. In his quest, he clashed with the then-govt over a bill that would require criminal suspects to submit DNA samples, fearing that this bill could be tampered with and used against him in his Sodomy 2.0 case. Unable to stop the Bill from being passed, he then led a walkout of PKR MPs.

“We staged a walkout, there is no point in staying in and participating. This is very disappointing, the government remains in a state of denial.” – Anwar told reporters.

4. When some MPs were suspended without a debate 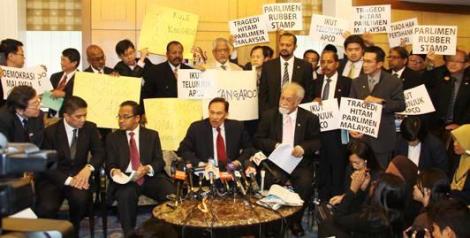 Now of course, if an MP violated Dewan Rakyat rules, they should face the possibility of suspension regardless which party they come from. However, the issue this time was that apparently, there was no debate over the motions. So, the PKR MPs shouted and protested lah.

After the motion against Anwar was passed, the PKR MPs walked out, leaving the BN MPs to decide to suspend the other 3 PKR MPs, which they did. This effectively reduced the number of PKR MPs from 76 to 72 for the next six months, giving BN its two-thirds majority back after the 2008 elections.

Who: Opposition MPs, except PAS So back during the tabling of the Budget 2017, the then-PM Najib Razak was presenting his budget speech when PH MPs criticized it for being ‘not well thought out’ and ‘too optimistic’. Najib responded by challenging MPs without any substance to leave the hall, which was met with heckling by the Opposition. Some even stood up, holding placards that read “Where is MO1?”, after which things turned relatively chaotic in the August hall.

NAH, BACA:
How is Sisters in Islam Dividing Malaysian Muslims?

After failing to get people to calm down and listen, the Speaker Tan Sri Pandikar Amin Mulia asked them to leave, which they did. The PAS MPs remained seated, however.

“All of us in DAP, PKR, Amanah and PPBM walked out.  He (Najib) was not serious in tabling the budget. He was putting up a show, rather than presenting a budget to the whole nation,” – Chong Chien Jen, DAP-Kuching, to the Borneo Post.

6. When the Opposition MPs failed to teach BN MPs a lesson in truancy Click on this image to get entertained. From StarTV.

On 29 March 2018, the PH MPs noticed that many BN MPs were absent during a debate on GST exemptions. This prompted the PH MPs to allegedly try and punish the BN MPs for skipping Parliament, so PH called for a bloc vote right there and then to catch BN off guard and pass the motion at a time when their numbers were low.

But this was a failed attempt because Deputy Speaker Ronald Kiandee insisted on doing the vote after lunch, when the BN MPs came back, outnumbering the PH MPs. Zahid Hamidi then called for the vote, to which the PH MPs decided to stage a walkout on grounds that this was an abuse of the process.

“The speaker should have called the vote then and there but he delayed it to 2.30pm. BN then rushed all their MPs back, including even the deputy prime minister. It’s the first time the DPM asked for a bloc vote and we left because we feel that the process of the vote was misused.” – Anthony Loke, DAP-Seremban, to FMT.

Who: BN and PAS MPs

This was when BN and PAS MPs staged a walkout to protest against the appointment of Mohd Ariff as the Speaker of Parliament. As the secretary of parliament read out the proclamation for his nomination and appointment, PAS MP Takiyuddin Hassan questioned the legitimacy of Mohd Ariff’s nomination, which they claimed did not follow the proper procedure. Despite their jeers, the Speaker election process continued, and BN and PAS MPs (except KJ and Anifah) walked out in protest.

“We had an option, to just sit (in the House) when something wrong was taking place or leave. Parliament is a place where we have to follow protocol, it is not a circus or platform to take revenge,” – Annuar Musa, Ketereh MP (BN), to Channel News Asia.

8. When it wasn’t clear whether a BN MP was still an MP pending a court case You might remember some time back that the Cameron Highlands seat was vacated because its MP then, MIC’s C. Sivarraajh, allegedly bought votes last in the last GE.

Well, on 5 Dec 2018, the Parliament had a sitting, and R.S.N. Rayer (PH-Jelutong) pointed out the Sivarraajh had been suspended because his case’s appeal was still pending, so the Speaker, Mohd Ariff, had declared Sivarrajh to be a “stranger in the house” and asked him to leave. Despite the protests of BN lawmakers, Ariff was adamant in not letting Sivarraajh stay, so the BN MPs staged a mini-walkout just before lunch.

“You are punishing him even though you’ve not made a decision. He is still an MP and he has the right to sit in the Dewan,” – Datuk Seri Ismail Sabri Yaakob, BN-Bera, to the Star.

Several days later, Sivarraajh was allowed back in, and his entry during a Finance Bill debate sparked a fresh conflict, where Bung Mokhtar (BN-Kinabatangan) and Tajuddin Rahman (BN-Pasir Salak) called for RSN Rayer to apologize to Sivarraajh, which he refused. Things escalated to a full-blown shouting match, which ended when the Deputy Speaker Mohd Rashid asked the two to leave. Following that, BN MPs staged another walkout.

Of course, there have been plenty of other cases of MPs leaving a sitting, but despite it’s commonness…

Walkouts are probably more common than most people think, as there’s always something to disagree with, especially since the opposition parties are there to provide a voice of dissent so that policies can be improved. One crucial way the opposition can do this is by questioning the motions and suggesting alternative solutions through discussions and debates, which is what the Parliament should be about.

But sometimes, as we’ve seen in the cases above, debates are often difficult to control, so if the MPs aren’t given the chance to make their statements heard, they wouldn’t see any point in trying to debate it out. And this often leads to walkouts. However, do any of these walkouts make the change they want? Well, judging by the outcome of these walkouts, only the 2015 and 2016 walkouts against Najib’s rule were successful in creating the change they wanted, albeit gradually through GE14. Everything else remained the same, so it’s proooooobably safe to say that walkouts don’t work most of the time, even if it happens every other parliament sitting.