If you’re not living in Cameron Highlands or have no political interests there, you might not be aware of what’s hot there right now.

What else is there in Cameron? Gif from Tenor.

No, it has nothing to do with strawberry nasi goreng. There will be a parliamentary by-election there this coming 26th January (next Saturday), the second one we’ve had since GE14 (fifth if you count state by-elections as well). While previous by-elections happened due to deaths and a need for a certain someone to enter the Parliament, the Cameron seat had been left vacant due to Datuk C. Sivaraajh, of BN’s MIC, being found guilty of bribing the Orang Asli community there to win the seat.

Besides his victory being nullified, Sivaraajh also has to pay the Election Commission (EC) a fine of RM5,000 and is prevented from both voting and contesting in any elections for the next five years. With Sivaraajh out of the picture, BN has to come up with a new strategy to win the Cameron seat in the upcoming by-election, and with bribery probably off the table (or not under it)…

For the first time ever (as far as we can tell), BN picked an Orang Asli to represent them 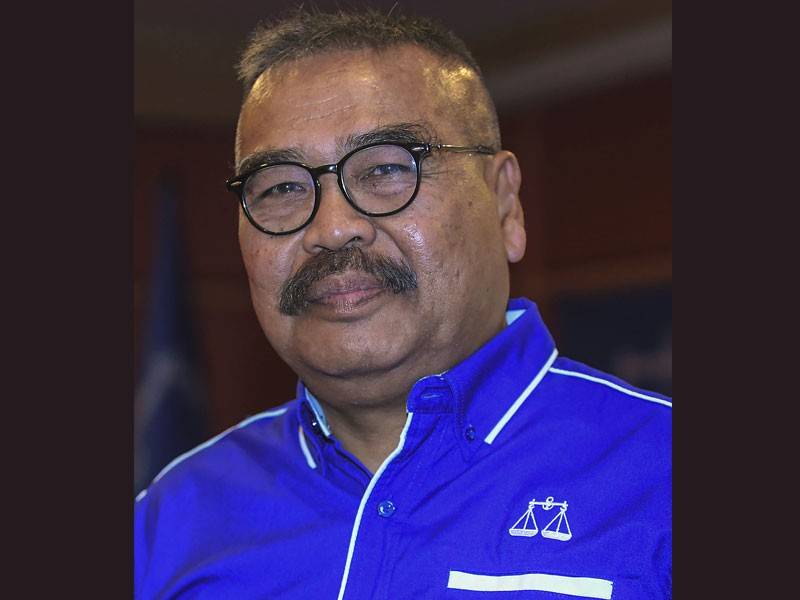 Since Cameron Highlands had been an MIC seat for at least a decade already, it may come as a surprise for some when BN’s deputy chairman Datuk Seri Mohamad Hassan announced a retired senior Semai Orang Asli police officer, Ramli Mohd Noor, as the candidate for the upcoming by-election. This move to appeal to the Orang Asli in Cameron may be fitting, since they make up 22% of the 32,009 voters there, mostly from the Temiar.

According to Mohamad Hassan, Ramli is the candidate that they feel can give BN an advantage in Cameron.

“He has a master’s degree and is currently preparing a thesis for his PhD. He is a local, his father is from the area and many Tok Batin (Orang Asli village chiefs) are related to him… He is Ramli Mohd Nor, retired ACP and his last position in the force was commercial crimes assistant director,” – Datuk Seri Mohamad Hassan, as reported by Malay Mail.

Ramli is also the highest ranking Orang Asli police officer Malaysia has ever seen. As for what he’s like, he had urged the Orang Asli to climb out of the cycle of poverty through education in a 2015 interview, and during a meet and greet session in Tanah Rata, he had said that he just wants the voice of the Orang Asli to be heard in the Parliament. Aaandd… that’s about it. According to other reports, he seemed uncomfortable with questions from the media regarding his plans for the community and his campaign manifesto and didn’t answer those.

Interestingly, Ramli is also contesting for BN as a direct candidate, meaning that he’s not representing any of the parties within the coalition. As far as we could google, we couldn’t find any precedence for this. This move was said to keep the peace among BN’s component parties, particularly MIC who lent the party’s traditional seat to BN.

“There were Umno members who wanted us to take the seat from MIC. But I said no, that will be a betrayal of MIC. We will field a BN candidate. There are clauses that allow someone to be a direct BN member instead of its coalition party member,” – Datuk Seri Mohamad Hassan, as reported by Malay Mail. 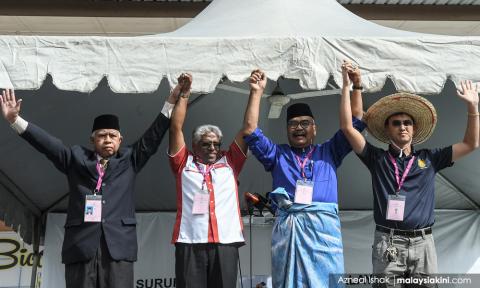 …and not just because of his heritage. Looking back at GE14’s state elections, there were three Orang Asli candidates contesting, and none of them did very great. In Kemayan (Pahang), where Orang Asli made up 9.42% of the voters, Manolan Mohamad (PH-PKR) only managed to get 19.8% of the total vote, losing to BN (43.7%).

Orang Asli voters make up 20.26% of the voters in Galas (Kelantan), yet the PH-PPBM candidate Nasir Dollah only got 14.6% of the total votes, losing out to both BN (35.7%) and PAS (27.2%). In Jelai (Pahang), the PSM candidate Mat Nor Ayat only garnered 1.8% of the votes, despite Orang Asli making up 33.82% of the voters there. In any case, we can say that when it comes to elections, the Orang Asli may not vote for a candidate just because they’re of the same race. However, you might notice that all of them were non-BN candidates. BN selecting an Orang Asli candidate may be a tactic that can only work for them, as they have a strong foundation when it comes to the Orang Asli. They are said to understand the needs and wants of the Orang Asli community better, whereas candidates from Pakatan were seen as apathetic and arrogant in comparison by some Orang Asli, talking about the GST and 1MDB, among other things. These things don’t directly concern the Orang Asli, who have more pressing and immediate needs.

This is perhaps why the Orang Asli had been called as ‘fixed deposits’ for BN in the past, but that view is changing. However, interviews done among some of the community in Cameron revealed that despite some of them being disappointed in BN for failing to bring the change they need for so long, they might consider voting for BN again due to Ramli contesting. Also, while some seem to be unsure of Ramli, they know who he is, whereas during Manogaran’s visit (the Pakatan candidate) some of the villagers admitted that this is the first time they have seen him (or anyone from Pakatan) in the village. One of them didn’t even know who Manogaran is despite this being the third time he is contesting this seat.

It would seem that candidate-wise, BN is at an advantage. But another thing may have tipped the scale in BN’s favor even more… Bob Manolan, during the meeting. Img from MalaysiaKini.

According to a report by MalaysiaKini, in a meeting with chiefs (batins) and representatives of 18 Semai Orang Asli villages in Cameron, PKR senator Bob Manolan Mohd was reported to have said that chiefs can lose their salaries and posts if they do not support the federal government. This seemed to have happened on January 11th.

Bob Manolan had also said that the Harapan gomen wanted village chiefs that they can work with, and if the villages have a problem, they should tell the government instead of just nodding their heads as long as they get money every month, which can vary between RM800 and RM1,200 depending on the size of their village. After the report, things kinda blew up, with some from the Orang Asli community feeling insulted by the statement, and a batin filing a police report on the incident.

“As a senator, he should understand better the ways of the Orang Asli who appoint their tok batins. They are chosen by their community according to their villages, and not what politicians want. We are disappointed, sad and angry. As a senator, he shouldn’t say such things,” – Bah Long Siang, Sungai Ruil community leader, to FMT. Following the controversy, PKR’s vice-president Tian Chua apologized to the Orang Asli community in Cameron, saying that PKR dies not endorse any methods that involve coercion, threats or enticement of voters in elections. This notion was shared by many others in Pakatan, among them Lim Guan Eng, the Finance minister, and M. Manogaran, the Cameron candidate himself.

While in the beginning Manolan had denied threatening the batins, saying that some of them were heads of Umno branches who refused to attend meetings held by government agencies, he had later apologized to both the Orang Asli and the public.

“I personally apologise to all Tok Batins and those who were offended by my statement. There is not a single intention in my heart to offend them, more so intimidate. I have defended the Tok Batin institution since long ago, and even fought for those who have been fired by the previous government,” – Bob Manolan, as reported by Malay Mail.

While Manogaran had played down the controversy, saying that it won’t affect the campaign, in the rush of campaigning one may forget that…

There are bigger problems for the Orang Asli besides representation, but it’s a step forward

As of the time of writing, the only plan we’ve heard from the BN candidate was him being the voice of Cameron’s Orang Asli. However, the plight of the Orang Asli in Cameron, in fact all of Malaysia, is not really a secret. A majority of their villages are behind on basic infrastructures like electricity and clean water, even those really close to cities. And let’s not get started on land issues. Which they tried to fight back in Kelantan using blockades. Img from Aliran.

In Cameron specifically, many of the Orang Asli villages have no proper roads or a clean water supply, and they have to rely on river water which can sometimes expose their children to illnesses like leptospirosis. There is also the problem of having to travel many miles just to get a phone signal strong enough to make a call. With BN announcing its Orang Asli candidate for Cameron, Pahang’s PKR chairman Fuziah Salleh had said that BN’s strategy can be used in PH’s favor, as they plan to pull out all the stops to highlight the community’s issues that were ignored by the previous government.

“Their tactic (BN) to name an Orang Asli candidate is not an advantage to them … what was the candidate’s contribution to the Orang Asli community (when BN was the Federal government) in Cameron Highlands? Did he help solve the customary land issues for the Orang Asli? Did he assist in improving the livelihood and the economy of the community?” – Fuziah Salleh, to New Straits Times.

We can’t really say that one party is better than another when it comes to keeping election promises, but the point is, after decades of elections and promises given to the Orang Asli, they are still facing the same problems today, no matter which political party makes up the government. Nevertheless, now that BN have decided to field an Orang Asli candidate, they will have to listen to the voice of the community if he is to win the by-election. But even if he doesn’t win, it’s still a step forward for both Orang Asli representation and democracy in general.