First things first, while most people think that it was only Major Zaidi who made the report, there were actually two others with him: his civilian wife and Sergeant Jamal bin Ibrahim.

On 30th March 2013, 235,826 security forces personnel and their spouses nationwide casted their votes for GE13, one week before the rest of the country did. Out of this sum of voters, only the three of them came forth to make an official report against the not-so-indelible indelible ink.

Spotlight’s on Major Zaidi, a veteran in the Royal Malaysian Air Force (RMAF) whose case went majorly public and was fired from the service just recently. Publicly hailed as a hero for standing up for the truth, CILISOS speaks to Major Zaidi to learn more what he went through.

But first, here’s what he did during GE13.

After casting their votes, Major Zaidi found that many army men complained about just how easy it was to rid the ink from their fingers. Instead of being one horrible manicure, he too found his finger to be sparkly clean and fresh after using hand soap and dish detergent. Indelible? Unbelievable.

That very night, the head of the Elections Commission (EC) announced that the early voting went on smoothly and that nobody complained about the ink’s lack of staying power. According to Major Zaidi’s story on Bersih‘s website, the EC even reiterated confidently that the ink would stay up to seven days.

Upset over injustice with his moral and religious sense tingling, Major Zaidi together with his civilian wife and Sergeant Jamal lodged a police report and spoke to the media the next day. News about the ink made waves across the nation, and it wasn’t long before the two army men were given boring, mundane desk jobs instead of flying. 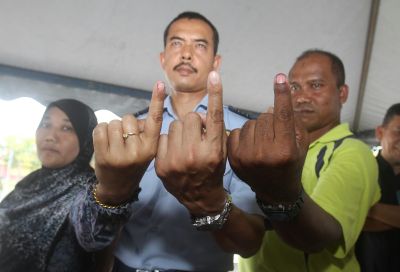 A week after that, the rest of the country felt for themselves the power of the RM7.1 million not-so-indelible ink.

In the months that followed, the Major Zaidi was thrown several charges revolving around violation of protocol and disclosing information without approval, despite his defence of representing himself as an individual.

And just few days ago, on 12th January 2015, Major Zaidi was found guilty on two counts and hence discharged from the force. The two charges are:

(To add, Major Zaidi told CILISOS that Sergeant Jamal’s case would be handled internally as he’s not an officer. Also, because his term of service with the force is about to end, they might not sack him the way they sacked Major Zaidi.)

Why didn’t anyone else speak up?

So, while the rest of the country cry injustice over the incident, that the guy was unfairly punished for speaking the truth and unfairly judged by a someone who was biased against him, there’s an untold worry. There were 235,823 other early voters who tried on the indelible ink, but unfortunately none were equally bold to echo the actions of these three. Screencap of the RMAF’s core values.

“Initially, some supported me especially on Facebook. But as you know, Facebook accounts – especially those of government workers – are monitored, so less and less armed force personnels were active on my Facebook. My relations with my colleagues are still normal, but they just avoid talking about my case.” – Major Zaidi tells CILISOS

He also adds that majority of the armed forces usually try to avoid politics as they know the repercussions, adding that “what happened to me proved it”.

Mariam Mokhtar worded it perfectly in her blog: “Military men and women risk their lives in the line of duty, but find, that as ordinary citizens, their democratic rights are snatched away.”

So what could be the reasons for these 235,823 voters to hold back their stand?

1. They don’t want to be labelled as ‘ungrateful’

“Most (of the military personnel) are inculcated with the belief that the government is the provider of their income, so don’t go against the government else you’re being ungrateful. The opposition can only give promises, but the government gives you jobs and projects.” – Major Zaidi

But do they dare vote for the opposition, if they wanted to? “As long as the armed force personnels vote separately and earlier than the public, there’s always fear that people will find out who they voted for,” he said. Make sure nobody sees who you vote. Photo from kualalumpurpost.net

To add to that, Lim Kit Siang’s article in Malaysia Today states that Malaysia has one the largest civil services in the world, with a 1.4 million civil servants accounting for 10 per cent of the labour force. To put it into perspective, he adds that in 2009, our civil servants-to-population ratio was the highest in the Asia-Pacific.  “The ratio was 4.68 per cent  compared to Singapore’s 1.4 per cent, Indonesia’s 1.79 per cent, South Korea’s 1.85 per cent and Thailand’s 2.06 per cent – all of which have less than half our ratio.”

NAH, BACA:
5 reasons why BERSIH needs help NOW, and not in 2018. #bersihforkopimahal

What does this have to do with anything? Well, if the sentiments by the military personnel is shared by government servants across the country, then there’s a lower possibility that Malaysia ever see clean and fair elections, even from the voters themselves.

2. They won’t be able to climb the ladder… or worse, keep their jobs

In general, if you worked in a private companies you’ve most likely heard a wide spectrum of opinions about the government and its opposition. There’s no fear of walls with ears. However, it’s pretty different in governmental organisations as it’s been often opined that being branded as an opposition supporter may break their careers.

“It’s very difficult to progress, especially for officers. The higher you climb, it’s no longer about ‘how good you are in your work’. It’s about ‘how many influential people up there that you know and play golf with’.”- Major Zaidi

Take for example both Major Zaidi and Sergeant Jamal’s case – as mentioned earlier, they were both swiftly given unprogressive tasks after what happened happened. Sergeant Jamal was also denied a promotion while his peers received theirs. Major Zaidi got fired from his job of 25 years. “I’ve been discharged from the service, but it’s still subject to confirmation by a higher authority. I can wish for a lighter sentence, but I’ve decided not to appeal,” he adds. “It may take a month for this to process before I am officially out of the service and back to being a civilian. Until then, I’m still subject to the military law.”

3. They wouldn’t be able to get back to normal life 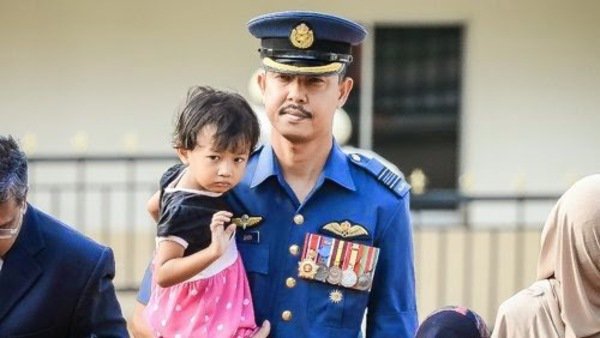 After 25 years of service, nothing’s the same anymore. Photo from rakyattimes.com

While Major Zaidi tells us that he wasn’t ‘dishonourbly discharged’, just imagine if he was. Imagine if anyone else was. To be dishonourbly discharged is pretty much the same as being a convicted felon, and there’s only so much you can do with your basic benefits stripped. Bank loans, insurances, right to vote, running for office, job applications… All that. Gone.

To add to that, there’s also a fear that they may be sent to jail. Major Zaidi was facing jail-time of up to 2 years for violating protocol and disclosing information to the public, among others. While he walked out a free man, what he paid for speaking the truth was bad enough.

Here’s how much he lost for telling the truth, and how you can help.

How does replace RM6,500 from scratch? With a housewife and four children (one in a local university, another just fresh out of secondary school, another in Standard 4 and the youngest at four years old), the sudden loss of a rice bowl is a flying roundhouse kick to the stomach. Even unmarried individuals in the city are finding it hard to make do with RM4,000 a month, people. (Friend say one.) What more a father of four?

So how can you help? Here’s what Major Zaidi told us:

2. Purchase his book – Netizens have suggested cash donations and even ‘Je Suis Zaidi’ t-shirts, and while Major Zaidi is open to financial help, he’d prefer if people purchased his book instead. To purchase, you’ve gotta check out his Facebook page for updates. 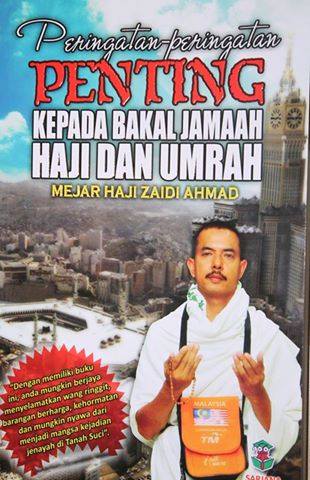 3. Buy Stevia from him – Yep, we’re not even kidding. Major Zaidi has joined a direct-selling business selling Stevia, a replacement for white sugar. He actually plans to make it his main source of income after this, so don’t think it’s some scammer using his Facebook fanpage or something. Wanna lose weight and wanna help a hero? You know who to go to. “During this trying time, I welcome any donation and I’ll try to give back to society by joining the fight to get a clean and fair election,” he says. “But for a start, people can purchase my book. I plan to write more books after this.”