When I was writing an article on the weirdest ways our tax money is being used, I came across the “Super Najib” comic – a comic book which was apparently distributed by the government in the few months leading up to the 2013 General Elections. And it’s not just any ol’ comic either… it’s a comic featuring someone who looks like NAJIB AS SUPERMAN. 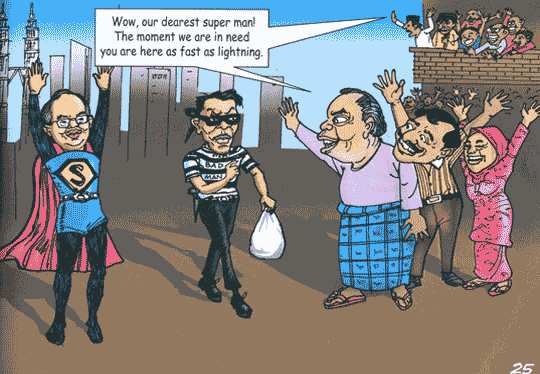 But why do the people look as if they’re talking to the bad guy? Image from The Malaysian Insider

“See if you can get a copy of the comic. It deserves an article on its own,” says Chak (aka Mr. Editor).

Oh gee golly whizz, a whole article where I don’t have to stress about politics, religion, or politics? SURE! So I found a couple of sellers listing the books for sale, contacted them, and waited while they searched for the book. And waited… And waited.. And waited…. And waited. Image from blogoftheboss.com

After several calls and being told that they were “still searching,” I gave up and started work on something else. That was when I found out that there wasn’t ONE Najib comic…….. there were FOUR!

Because these comics weren’t reported on too much, you have to know what you’re specifically looking for in order to find it. And because there isn’t too much info on it…

We actually found four comics, so here are the first TWO. Next two coming soon!

(Click on the images for full size. Our translations are in the captions.) This comic was distributed sometime in early 2012, according to the only source we found (Told you there was a lack of information!):

During an announcement ceremony of a foundation for ex-Community Development Department (KEMAS) employees, guests were treated to a dinner, RM20 each, souvenirs, a vow for KEMAS members to support BN’s victory in GE13… and two comics- Kalau Pakatan Memerintah and Transformasi vs Reformasi (Which we’ll cover in a bit). Here are some of the more interesting highlights… “Malay special rights will disappear. If they’re disputing it now, what then if they’re in power.”

Well… this is opening up a can of worms already, and it’s just the first point! We won’t go too much into the issue of special rights (or Article 153 of the Federal Constitution if you wanna be specific about it) since you can read CILISOS freelance writer Hanna’s quick and easy guide here, but we would say that the comic does have a point in that DAP (who is part of Pakatan) has been opposed to the idea of Malay special rights, but only in the idea that it hasn’t benefited the poor as much as making the rich richer.

“We support any measure which will help better the lot of the Malay poor. But we are strongly opposed to the use of Malay special rights to enrich the new Malay rich to make them richer, while the mass of peasantry and poor are exploited as ever.” – Lim Kit Siang, as quoted from his blog.

Also, as Raja Petra has pointed out, the whole argument of Malay rights has been kinda taken out of context since many of the issues such as economy and education are privileges rather than rights (most brought about by the NEP), and privileges CAN be taken away while rights cannot.

So in this sense, the comic above is correct, but just not in the way you think. “Others will control every sector. Malays are forced to compete with arms that aren’t the same length [with disadvantages]”

Don’t call the sedition hotline guys! We didn’t say it, the comic says it! For the record, we think this message is way racist  because it not only puts down many able, gifted, and hard-working Malays; it also implies that many Malays who have gotten into a position of success managed to do it because they had outside help.

While everyone does need a helping hand once in awhile, we find the suggestion that the helping hand needs to be there all the time guiding you along like a grandmother crossing the street a little condescending, don’tcha think?

You can’t depend on PAS for Islamic matters anymore! “There isn’t anyone else that can be depended on to safeguard the sanctity of Islam and Malay sovereignty. To depend on PAS… If they’re willing to put aside principles of an Islamic country to please DAP, what more safeguarding religion, race, and country!”

Well, we can probably rule out Nostradamus and Raja Bomoh Sedunia as the unknown author of this comic since PAS and DAP have been at loggerheads over the whole Hudud issue… … and funnily enough, the one giving PAS the most support in their bid to introduce Hudud law in Kelantan is *dun dun DUNNN* UMNO. In fact, we’re talking about “moved to tears in support” kinda support. We were gonna put a #toosoon tag on the Karpal Singh (RIP) depiction, but this was published before he passed away. 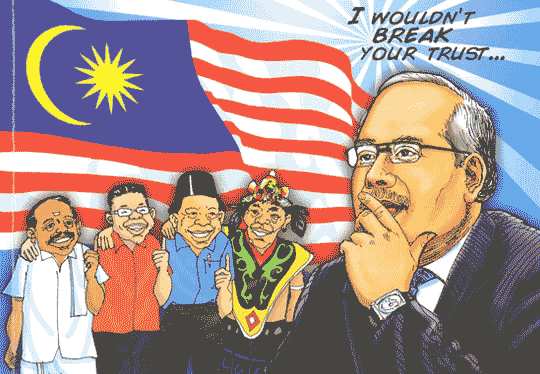 Seriously, this comic is almost like an urban legend – let us tell you why. For one, it doesn’t seem to have an actual title and none of the characters who resemble certain political figures are mentioned by name. We’re only calling it “Super Najib” because we had to give it a title with a random name okayyy… Also, The Malaysian Insider did some detective work on this comic and found that the publisher, MJ Publication, doesn’t seem to exist; and that the comic doesn’t carry a printer’s permit license as required by the Home Ministry.

The same article also mentions that this comic was given to teachers a few weeks before GE13, supposedly by state education departments. The teachers were attending a briefing called “Wacana Transformasi Minda” where they were “briefed about the government’s achievements in the past few years”. Here are some of the best shots. One of the more commonly shared pages from this comic depicts an superhero character whom we randomly named Super Najib flying through the air and cheered on by the people below. But what does he do? Beat aeroplanes? Burning through the sky at 200 degrees they call him Mr. Fahrenheit?  OF COURSE NOT! 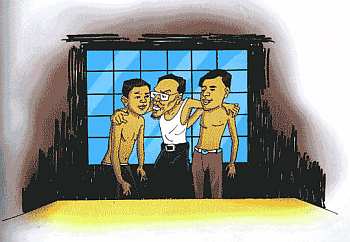 Clicking this image will lead you to a smaller picture. Ironically.

If you look at the picture of the BadMan in the previous shot, you’ll notice a more than passing resemblance to a certain opposition leader Here, arguably the same feller is shown in one panel with his two topless henchmen. Obviously they were in a very warm room plotting something to thwart our national hero.

Unfortunately, these are all the clear pictures of the “Super Najib” comic book we’ve been able to find online. Oh and this last page here. Note the publisher name at the bottom. So where did these comics come from??

We figured this would be the question on everyone’s minds but our honest answer is “We don’t know”.

Since most of these comics (including the next two we’ll be highlighting soon) don’t list the author’s names nor the publisher, it could also be very possible that they were privately paid for – which leads to the question of why someone thought these comics were worth printing, and where the funds from the comics came from. But looking at the content, you’d have to say it’s leaning towards you-know-who.

During an event which set a record in the Malaysian Book of Records for the largest gathering of a Prime Minister with cartoonists (!), PM Najib urged the attendees to integrate 1Malaysia and country transformation initiatives into their work. So maaaaybe  this could be some aspiring artist carrying those messages through the educational role of comics in distributing information.

Be warned though… comics can also be pretty dangerous since it may spread the wrong kind of message. The record for most sedition charges (nine!) is against a local cartoonist named Zunar who also draws comics about PM Najib……….. in a much less flattering manner.