It’s not unheard of for family members of top politicians to also run for office. From the Trudeaus in Canada, to the Marcos Family in the Philippines, and of course the Lees from our dear neighbors Singapore, the saying ‘it runs in the blood’ rings equally as true in politics as it does anywhere else.

In fact, we’ve got quite a few political dynasties in Malaysia ourselves, because what would Keluarga Malaysia be without, well… Keluarga? Let’s take a look at some of the most notable ones, starting with… Arguably the most prominent political family on this list, the Abdul Razak – Hussein Onn family boasts 3 ex-Prime Ministers, with 3 members running for GE15 this year. The Hussein Onn family has an interesting origin story: they can trace their roots back to the faraway Ottoman Empire (now Türkiye), while the wives of ex-PMs Tun Abdul Razak and Tun Hussein Onn are sisters, making Najib Razak and Hishammuddin Hussein cousins by marriage.

Although Hishammuddin and Onn Ghazi aren’t new to the political scene (Minister of Defence and Johor Mentri Besar, respectively), Najib’s son Nizar, an accountant by profession, is running for office for the first time in GE15, and for the Peramu Jaya DUN seat no less, which is in his father’s constituency Pekan. Boy, does he have some big shoes to fill. This one needs no introduction. The Godfather of Malaysian politics himself, Tun Dr Mahathir has been around for so long that it’s no surprise a number of his family have become well-established in politics, business, and in the case of his daughter Marina, activism. Collectively, Tun’s family members have their hands in a great many Malaysian corporations, but only one is still actively involved in politics alongside Tun himself: Mukhriz, party president of PEJUANG.

Although the two have served in three different parties, namely UMNO, BERSATU, and currently PEJUANG, it seems that wherever these two go, they attract followers from ex-parties; according to Mukhriz, over 70% of BERSATU members pledged their support to PEJUANG in 2020, though only the coming elections will tell if they still have those numbers.

Gear up, because it doesn’t look like Tun and Son are done just yet. TFW ‘Bring Your Family To Work’ day is every day. Image from: mstar.my

They say that some are born great, while others have greatness thrust upon them. In the case of Wan Azizah, it could be said that she was forced into politics, when the arrest of husband Anwar pushed her to create, and later lead the People’s Justice Party (PKR) in 1998. Their daughter Nurul Izzah too followed suit, going on to serve in various roles within the party, with the highest being Vice President.

With Anwar being put forward as Pakatan Harapan’s (PH) candidate for Prime Minister, there is the very real possibility that he will finally realize his long-standing dream of grabbing the hot seat. It isn’t too wild either to imagine that Wan Azizah could reprise her role as Deputy Prime Minister should PH win, which would make them the undisputed power couple in Malaysian politics. 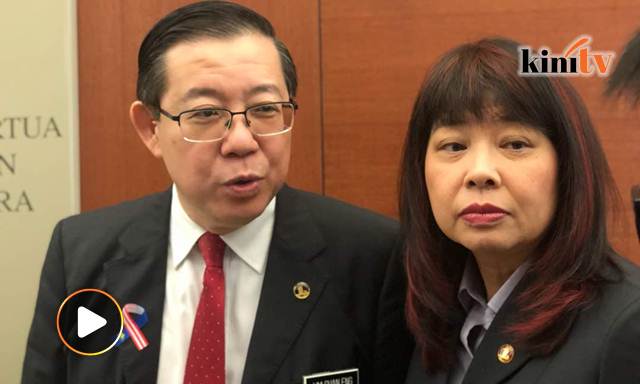 Penang one better, but two Penang ones are better than one. Image from: KiniTV/KL Chronicle

Although Lim Kit Siang has retired from competitive politics, his children are still going strong, with siblings Lim Guan Eng and Lim Hui Ying contesting a seat each in stronghold Penang. But of course, it wouldn’t be a Malaysian political family without some controversy, and the Lim family is no exception.

When Lim Hui Ying was appointed Senator in 2018, critics cried nepotism, to which Hui Ying replied:

“I have been in the party for about 20 years and actively involved in the party. I am also the state secretary for Penang DAP. So let time prove and see how I perform.” – Lim Hui Ying

Those criticisms resurfaced when she was announced as the candidate for Penang Chief Minister Chow Kon Yeow’s seat in Tanjong, but of course, what she said back in 2018 could still apply now, so only time will tell if she really can excel as a publicly-elected official.

So many relatives in politics… is it really nepotism?

Accusations of favoritism exist in pretty much every field, so politics is no exception, especially when family members are involved. On the other hand, it’s not so crazy to think that the offspring of a politician would also be politically inclined, and being the child of a politician does not guarantee that one would share the demeanor and ideologies of their parent. Take Marina Mahathir for example, who chose to stay away from active politics altogether, and appears to have a drastically different outlook on life as compared to her father. Marina once asked her father the meaning of the word ‘mediocre’, to which Tun replied: ” not particularly good at anything… like you.” Ouch. Image from: The Star

It’s probably a good idea to view each individual in isolation, and recognize that each person is different. Of course, what really matters much, much more than family ties, is whether or not they do a good job.